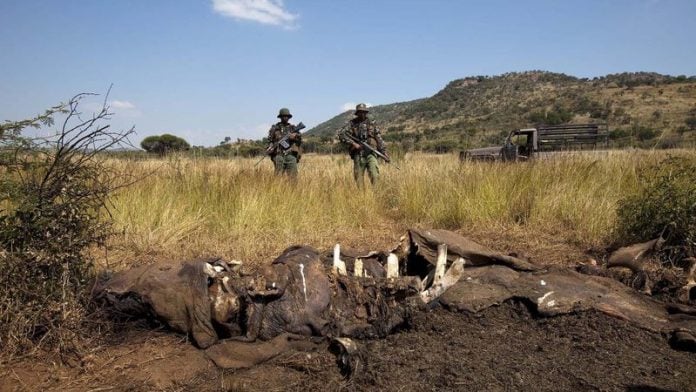 Spokesperson Albi Modise said in a statement on Tuesday that the Kruger National Park bore the brunt of poaching.

Modise said three alleged poachers were arrested in the Tshokwane section of the park last week after a black rhino was killed. One of the men died in a local hospital after he was wounded in a shoot-out with park rangers.

The rhino horns, as well as a .458 hunting rifle with a silencer, ammunition, and poaching equipment were confiscated from the men.

Last Tuesday an alleged poacher was shot dead by rangers near the Langtoon dam in the park during a shoot-out. Two guns, ammunition, and poaching equipment were recovered.

The park's figures for the year had increased from 180 to 201 poached rhino over the past week. A total of 41 alleged poachers had been arrested in the Kruger since January.

Since the beginning of the year, the North West had a total of 21 rhino poached, while 19 were poached in KwaZulu-Natal, 19 in Limpopo, and 13 in Mpumalanga. – Sapa

This story was produced in partnership with Pulitzer Center. Details of the land claim settlement for MalaMala, one...
Read more
Analysis

It was a helluva week, particularly after my cellphone died. But I found an old phone number for Gwede
Read more
Environment