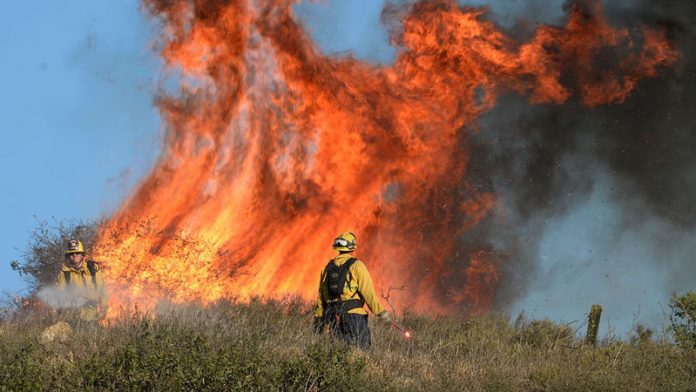 Wind-driven flames ripped through tinder-dry brush and were soon racing towards the Pacific Ocean, incinerating more than 32 square kilometres and putting around 2 000 homes at risk on Thursday.

Television footage showed at least one home ablaze in an isolated canyon as around 600 firefighters fanned out across the vast area to try and staunch the rapidly advancing wall of fire.

"We are asking members of the public to be very aware – this is very dangerous. This is still a moving fire."

The blaze fanned by strong winds ravaged hillsides and canyons in Ventura County north-west of Los Angeles, threatening homes around the towns of Newbury Park and Camarillo, north of Malibu.

California State University at Channel Islands announced it was cancelling all classes and activities at its Camarillo site "due to the [fire] and heavy smoke drifting onto the campus".

Live television pictures showed flames and smoke billowing up from the tinder-dry hillside above the Dos Vientos neighbourhood of Newbury Park, where residents were ordered to evacuate.

Helicopters could be seen drawing water from a nearby lake to drop on the flames, in video shown by KTLA 5 television.

Wildfires are common across the western United States in the summer, and in southern California they are often fanned by strong offshore Santa Ana winds that more typically blow up in the fall and winter. – AFP

Extreme heat, wildfires and the cost of climate change

On Monday night, firefighters fought against the flames, which were fanned by winds of up to 100km per hour
Read more
Friday

An exhibition touring the US brings together contemporary artists using the ancient form of masquerade to explore issues such as self-realisation.
Read more
Advertising