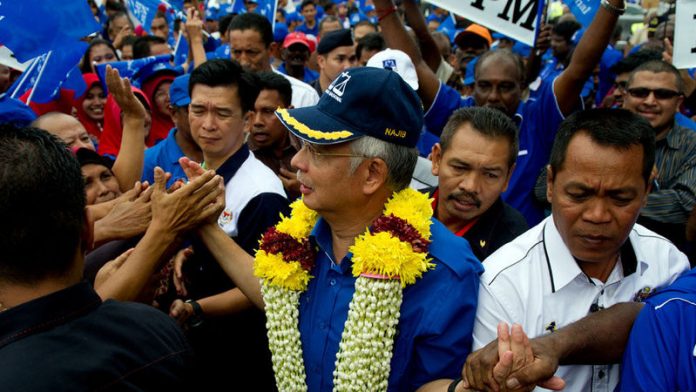 According to an independent survey, Prime Minister Najib Razak's long-ruling coalition is running neck and neck with the opposition alliance ahead of Sunday's general election.

A survey released by polling house Merdeka Centre predicted Najib's National Front coalition could win 85 parliamentary seats, while a three-member opposition alliance led by Anwar Ibrahim will take 89 seats. It said 46 seats were too close to call while two seats will go to smaller parties.

The National Front now holds 135 seats in the 222-member Parliament, while Anwar's People's Alliance has 75 seats after some lawmakers left in recent years to become independents.

If the opposition wins, it will mark a remarkable comeback for Anwar, a former deputy prime minister who was fired in 1998 and subsequently jailed on corruption and sodomy charges that he claimed were fabricated by his political enemies. He was released from jail in 2004 and now leads the biggest threat to the National Front.

"They are in a dead heat. Both are enjoying equally strong support. It will be a very tight contest," said Ibrahim Suffian, head of Merdeka Centre.

Anwar's alliance surged into political prominence in 2008 elections when it won more than a third of seats in Parliament and gained control of several states. It was the biggest blow for the National Front since independence from Britain in 1957 and was spurred by discontent about corruption and racial and religious discrimination.

The Merdeka Centre poll, which questioned 1 600 people between April 28 and May 2, showed 42% agreed the opposition should be given a chance to govern while 41% supported the National Front, which has been in power for 56 years. Four percent of voters refused to respond while 13% were undecided, it said. The poll's results have a margin of error of 2.45%.

Ibrahim Suffian said the survey showed that many people aged below 40, who account for 52% of voters and have greater access to the internet, backed the opposition, while the National Front is more appealing to the older generation in rural areas.

He said the survey indicated a split among Malays, who make up 60% of Malaysia's 29-million people and traditionally support Najib's ruling Malay party that heads the National Front.

The government said the survey showed Najib's approval rating at 61% while 58% of voters agreed the country was on the right track.

A statement by the prime minister's office said the survey excluded voters in its stronghold Sabah and Sarawak states on Borneo, which if included, "would tilt the poll even more in favour" of the National Front.

Najib (59), who is seeking his first mandate at the polls since becoming prime minister in 2009, has taken on the reform mantle to counter the opposition.

He has embarked on a series of economic and government transformation efforts to revamp his coalition's image, including abolishing security laws widely considered repressive, wooing investment from abroad and bolstering public welfare, including cash handouts for civil servants and the poor. He has pointed to the National Front's stewardship that turned Malaysia from an agricultural backwater into a modern, stable nation.

Anwar also said he is confident of winning because of rising support among younger voters.

"People have enough of this semi-authoritarian rule, of complete [government] control of the media, of strong arrogance, of power and endemic corruption," Anwar told the Associated Press in an interview this week.

Anwar and a polls watchdog have voiced concerns that the results could be marred by fraud.

Complaints have been made that indelible ink, which will be used for the first time to prevent multiple voting, could be washed off voters' fingers. The opposition has also said the National Front is chartering flights to bring tens of thousands of dubious voters to cast ballots in key areas. The government said the flights were part of efforts to bring voters back home to vote.

Polling watchdog Bersih urged Malaysians to exercise their right to vote as it warned the elections could "be stolen from the people with a series of fraudulent moves on the eve of polling day". – Sapa-AP