What I discovered when I got a gun 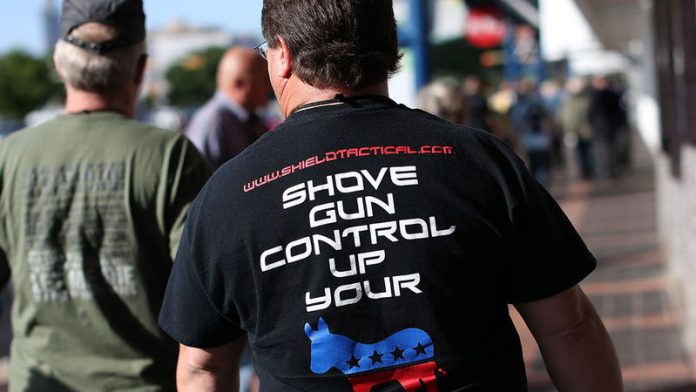 The fight is not over. That's the message from the National Rifle Association (NRA), as it celebrates its annual meeting throughout the weekend in Houston, Texas. This despite the fact that the powerful lobbying group has already managed to block a pretty sensible plan to expand background checks on gun sales and a proposal to ban some semi-automatic weapons.

It's perhaps no surprise that the meeting takes place just a stone's throw from a town that boasts the largest number of concealed handgun license holders in the state and only a couple of hours' drive (not much in Texas terms) from a town, appropriately called Gun Barrel City, whose council this week urged all its residents to buy guns.

According to the Houston Chronicle, 500 firearms companies, hunting outfitters and gun antique collectors will ply their trade to a somewhat captive audience. And there's even a national prayer breakfast on the NRA's schedule, because, let's face it, in America, God and guns go together like hamburgers and fries.

I've written opinion articles before on America's obsession with guns. In one of those, I mentioned that Austin, Texas, where I live, lays claim to America's first modern-day school shooting: back in 1966, a student at the University of Texas named Charles Whitman climbed the UT Tower, a 27-storey structure on campus, and picked off people at random. In the discussion thread, a reader took me to task over the weapon I'd had Whitman using: "if you try sniping at passers-by from the top of a 27-storey tower with a sawn-off shotgun, you aren't going to get very far".

He wrote: "Minor point, but is it too much to ask that writers have some familiarity with the subject that they're writing about, rather than just having the correct prejudices?"

Minor point, but Whitman did have a sawn-off shotgun (among others). Here's the police report, but "tommyjimmy" had made a fairly accurate analysis of my experience (or lack of) with firearms: what did I really know about them other than the fact I'd shot a handgun once at a range here in Texas and a shotgun a few times in my late teens back in the UK? Since moving to the United States all I'd seen were the stats and news reports about innocent people getting needlessly mown down by devices that I believed had been designed for one purpose only. Prejudiced? Possibly.

So I went out and bought a gun.

A 9mm Sig Sauer P250 semi-automatic handgun, to be precise. And then I attended a one-day concealed handgun license course up the road from my home, which enabled me to take my gun (almost) everywhere I went, albeit squirreled away in a holster tucked into my jeans.

I had been commissioned by GQ magazine to write an in-depth story about American gun culture and under the strict rules of immersion journalism I'd, er, immersed myself. The results surprised me a little, but it was less to do with how I felt carrying the gun around (pretty stupid) and more to do with the exhaustive research I did alongside it. Here's what I learned:

1. The pro-gun brigade will have you believe that the police absolutely love concealed handgun license holders. Spoiler, if you're about to read the feature I wrote: they don't.

2. Where I live in Austin, there are about 82 home invasions a year – in a city of 820 000 people. You're far more likely to be injured by your own gun than to need one to use against somebody breaking in at night.

3. Concealed handgun license holders are mostly white, middle-class men who want to defend against people and places they perceive as dangerous – especially ethnic minority men. Actually, this one wasn't much of a surprise.

4. I actually enjoyed target shooting, and, afterwards, taking my gun apart and cleaning it. It's pretty therapeutic.

5. More of my Texas friends (Democrat, Libertarian and Republican alike) had guns than I'd thought.

6. So-called assault rifles like the AR-15 are also manufactured and sold in Britain. It's perfectly legal for someone living in Croydon, for example, to own an AR-15 – if he or she has a UK licence for target shooting.

This last piece of information I found particularly astonishing; and I wrote a follow-up piece explaining why attacks from the left in Europe often miss their target due to a complete lack of knowledge about guns and gun laws in their own countries, let alone in the United States; that some people railing against the availability of assault rifles, which are so often demonised in the gun debate, lived in countries like the UK where the same guns are actually manufactured and sold to civilians.

The difference is that, in the UK, we don't license guns for use in the killing of other human beings as they do in the US. I'm not being facetious either. On my concealed handgun licence course, we learned how hollow-point bullets (that you can buy from Walmart, incidentally) are designed to expand when they meet flesh, causing maximum, bloody, damage. Adam Lanza, the Sandy Hook shooter, used this sort of ammunition.

The research I did for those stories also reinforced my belief that it's a very vocal minority in America whose affection for the right to bear arms isn't anything to do with hunting or target shooting. It's about arming themselves to the teeth so they can rise up against an oppressive government should the need arise. Because, you know, that kind of thing happens a lot in America. And they're going to be really effective against the most powerful military force in the world, if the need should ever arise.

It'd be funny if it wasn't so frightening. Up until the Newtown, Connecticut massacre, these were voices that many outside the United States fortunately hadn't heard all that often. But I'm actually glad they now have. In the past, when there hadn't been a school shooting for a while, this constituency just felt like a joke; but now, everyone can see that they have the ability to prevent common-sense measures designed to stem the tide of gun violence here in America.

So, if, for the NRA, the fight is "not yet over", and we accept that they're a powerful-enough lobbying force to stop these sensible proposals going through Congress at any time in the future, is there anything we can still do?

Actually, there may be a couple of things. My friend Tara Murtha, a senior writer at the Philadelphia Weekly, is also a volunteer at the Gun Crisis Reporting Project, which was started by a Pulitzer-Prize-winning photojournalist Jim MacMillan. This is where that banal term "raising awareness" actually means something. On average, over the last 25 years, one person has been murdered in Tara and Jim's home city every day – and more than three-quarters of those were by a gun.

The Gun Crisis Reporting Project refers to murder by gunfire in Philadelphia as an epidemic, and looks at gun violence from a public health perspective. The project also humanises victims of gun violence. As Tara says, with shrinking newsrooms, local papers can't cover all the gun violence that happens so frequently, and not all shootings are fatal despite the fact they all help traumatise communities. Much of this violence has become invisible, explains Tara:

"So we report on the memorials of the victims; we profile them and talk to the community. A daily newspaper may say 'a 23-year-old black man has been shot in the head at 7th and Fairfield', but Gun Crisis will take pictures of the memorial service, talk to his family and quote organisations working to reduce gun violence."

The Gun Crisis project also has active Twitter feeds – one solely for Philadelphia and one for the US as a whole. Both are like aggregators of gun crime, never letting their followers forget just how rampant it is. Today in California, a "child shot at Bell Ridge Apartments is stable"; on Tuesday, in Kentucky, a five-year-old boy accidentally shot and killed his two-year-old sister.

That's not to say we shouldn't focus on mass shootings, which the FBI defines as four or more victims, but we're definitely under-focused on the rest of gun crime in the States. A daily shooting resulting in death in Philadelphia is so commonplace that it rarely makes the news, as Jim MacMillan says:

"Ninety-nine percent of those shot to death in the US are not shot in mass shootings … There's no novelty; no deviation from the norm, and in a daily deadline sense I'm hard-pressed to argue with that."

But, he tells me, the real story is the bigger picture – this picture of the epidemic it has become.

"Nobody is suggesting we should be less attentive to Aurora, Virginia Tech, Columbine or Sandy Hook. But we need to look for innovative solutions to the epidemic of gun violence while avoiding the polarising debate."

Jim says the most promising development has come from the worlds of public health and criminology. And this is the metaphor of gun violence as disease – imposed on communities when certain socioeconomic factors some into play: lack of good schools, lack of opportunity, illegal drugs.

"In any community in the world, you'd have same result. And when researchers looked at the statistical pattern, they discovered outbreaks of diseases like smallpox and cholera looked pretty much same – but instead of bacterial transmission, the transmission here is in the violent act."

A model that seems to work at addressing the problem as a public health issue can be found in Chicago. Cure Violence uses methods associated with disease control – detection; identifying people involved in transmission; changing social norms in the societies where it occurs – in order to change it.

It employs people it calls "violence interrupters" and "outreach behaviour change agents", which Jim says are often men who have themselves been violent in the past, who are able to gain credibility with the people they're talking to. "Credible messengers", he calls them; people who "offer basic conflict resolution; let them know they have alternatives":

"Often, these people feel [gun violence] is a last resort, but giving them a cooling-off period may stop them pulling the trigger."

According to Cure Violence, these methods have directly been responsible for a reduction in shootings and killings in the specific neighbourhoods in which they've been employed – by up to 34%. But according to MacMillan, they're under-used: cities tend to spend a thousand times more on law enforcement and medical response than on prevention.

Politicians keep talking about trying to do something about gun violence. But while the NRA and its fans are successfully thwarting those attempts at every turn, at least some people aren't content with waiting until the smoke clears. – © Guardian News and Media 2013