Ronaldo to Ferguson: Thanks for everything, boss 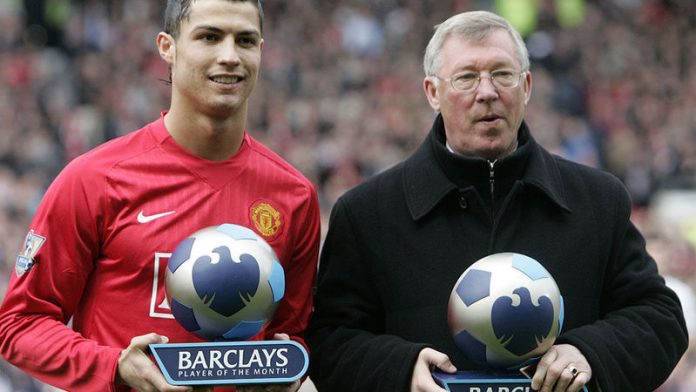 Former United winger Ronaldo's message on Twitter on Wednesday was simple – he posted a picture of his first day at Old Trafford with Ferguson in 2003 along with the message: "Thanks for everything, Boss".

"His achievements in the game place him without doubt as one of the 'greats'," Blatter said on Twitter.

"Will his longevity at the top ever be repeated?"

Uefa president Michel Platini hailed Ferguson as "a true visionary", who has made "a major contribution" to football.

"His CV is almost unique in a profession where results count and which normally looks to short-term rather than long-term solutions," Platini said.

"His dedication, his attention to details and his eye for talent while manager of Manchester United and Aberdeen have been richly rewarded for over 30 years."

Thanks for everything, Boss. twitter.com/Cristiano/stat…

Just heard Sir Alex Ferguson is retiring at end of season. His achievements in the game place him without doubt as one of the‘greats’.

Ince said: "He's done the lot, you will never see anyone of his kind again. Replacing Alex Ferguson is such a massive, massive job. Whoever goes in will need the help of Alex Ferguson," he added.

"Whoever comes in, if it doesn't go well you've got Sir Alex Ferguson upstairs and it can put added pressure on you."

Peter Schmeichel, the Danish goalkeeper who was one of Ferguson's most important signings at United, described his decision to retire as a shock and said he could not "make sense of the timing".

"It has come as a bombshell, I really don't know what to make of it," Schmeichel said.

"Yesterday I was really happy with what he had done this season, now this, I'm disappointed and very sad.

"He's always said the day would come when something in his life wasn't right. Is it his hip operation [he is due to have this summer]? I can't see him retiring over that. [Until] he explains why, we can guess and guess."

Alex Salmond, Scotland's first minister, said his fellow Scot's record at his previous club Aberdeen – rather than the success he had at United – was the real proof that he was an all-time great.

'All-time great football managers'
While at Aberdeen, Ferguson on the Scottish league twice, in 1984 and 1985, breaking the dominance of Glasgow giants Celtic and Rangers, who between them have monopolised the title ever since.

"I'm pleased he's managed to catch everyone by surprise because I know he'll be pleased!," Salmond told Agence France-Presse in an interview.

"I still think the greatest test of a real football manager is the ability to win the biggest prizes with unfashionable sides or less powerful teams.

"Winning the European Cup Winners' Cup with Aberdeen in Gothenburg [in 1983] is the indication that what we're talking about here is one of the all-time great football managers."

Michael Owen, the former England striker who was used sparingly by Ferguson in two seasons at United, said he was honoured to have played under him.

"What a man and great that it has ended on his terms. What a privilege to have played under arguably the best manager the world has ever seen. His record will surely never be eclipsed," Owen said.

Louis Saha, the French striker who scored 42 goals in 120 appearances for United said Ferguson was "the most powerful man I ever met in my life after my dad".

And golf star Rory McIlroy wrote: "An end of an era today! Sir Alex Ferguson, the greatest of all time! United will have a tough time trying to replace him!" – AFP