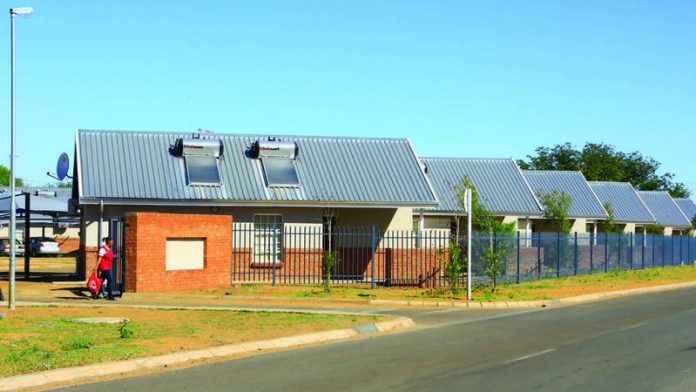 Global mining giant BHP Billiton is a good case study of the challenges of meeting the requirements of the mining charter, particularly when it comes to improving the lives of employees.

Although the mining charter's ownership targets (26% by next year) have captured many headlines, its requirement for adequate housing has proved to be a major practical challenge.

The hostel systems of the past, which emerged to house the largely migrant workforce, have to be replaced by housing with one individual per room. Hostels are a stain in the history of South African mining, often having served as little more than forced labour camps. To remove that legacy, some mines have to create towns from the ground up.

Replacing the hostels
BHP's Hotazel Manganese Mine in the Northern Cape illustrates the point. The mine is a self-contained operation situated in a barren landscape with no other economic activity for miles around.

By the time it is completed, BHP will have invested R380-million in developing company-owned single units and houses to replace the 13 hostels it previously used for worker accommodation. The first phase of this programme has resulted in the construction of 318 units, with an additional 304 planned for the final two phases.

It demonstrates the large investment required to transform the way workers are housed, even for an operation with a comparatively small workforce of about 6 000.

Apart from building new, acceptable accommodation, it also lowered housing demand by hiring more people from the local communities in and around the town of Hotazel, who do not require company accommodation. Ravi Naidoo, president of the company's manganese operations, says although it had to accommodate smaller numbers of workers than many of the larger mines, the lack of infrastructure in the Northern Cape contributed significantly to the cost.

Historical challenges
The company has invested R44-million into bulk services in the town of Hotazel to support the extra demands on very scarce resources in that region. The province suffers historical challenges such as insufficient water and electricity, which is exacerbated by the demands of the mining industry.

Naidoo says any development plans have to ensure that the local communities benefit from the provision of services that are essential to the mining operation, and that the mine has developed close relations with local authorities and communities to understand their needs.

"Working with the local council is critical to the delivery of these projects," says Naidoo. "But it is becoming difficult to develop new projects because we don't have the infrastructure to support additional development."

This is true of the most basic services such as power, water and sewerage, he says. The mine is also working with local stakeholders to lobby the provincial and national governments to ensure that capacity is created to meet demand.

Moving away from migrant labour
Naidoo says the mining charter helped to guide the business in prioritising objectives, but that decisions were also driven by the company's internal value system.

"In terms of the charter [the accommodation transformation] is absolutely critical," says Naidoo. "The mining charter in its initial design had tried to ensure a move away from migrant labour, and we have achieved that.

"In the main, the charter has driven that transformation, while the department of mineral resources and the implementation of the social and labour plan has assisted us as a company to uplift ourselves from this horrible hostel-dwelling situation."

He adds that the relationships established with local, regional and provincial stakeholders are one of the keys to the successful transformation, not only of the business, but of its immediate communities.

The positive impact on the quality of life for communities is enormous, and for that the charter and industry should take credit.

The sector employs 60 000 people in the Western Cape alone. Whereas some centres have cut staff, others are reskilling and preparing for a different future
Read more
Advertising