Alex Ferguson: Never to be Fergotten 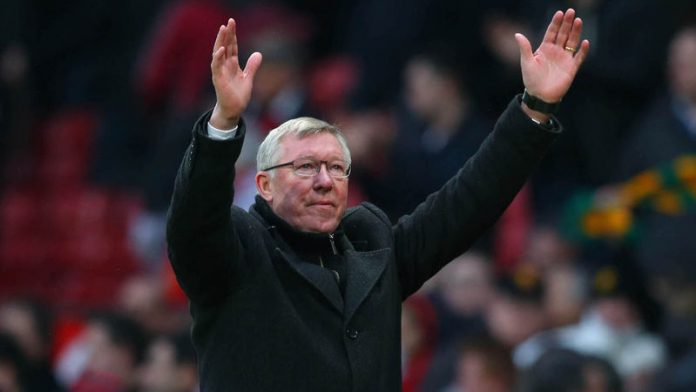 Like the end of the world, for those who follow English football closely, the retirement of Sir Alex Ferguson was always one of those things it's probably best to imagine never actually happening at all.

But then a slight loss of scale is entirely par for the course when contemplating Ferguson's outsized footballing presence. In the star-struck official biography, Fergie, even the moment of his birth in 1941 is consumed by historical potency. "On New Year's Eve, Prime Minister Churchill confidently told the Canadian parliament that 'the tide is turning'," Stephen Kelly writes. "Alex Ferguson was born that same day."

And so, 72 years on from his part in Adolf Hitler's downfall, and having learnt from his previous botched attempt to leave the stage a decade ago, Ferguson's retirement arrived with the suddenness more usually associated with a major news event.

If ever there was a managerial career that demanded a moment to stand and reflect then this is surely it. Even now at the point of predeparture there is an urge to hold Ferguson up to the light of history in search of a sense of scale, if only to determine a little more clearly exactly what it is we're saying goodbye to.

Ferguson's career is essentially sui generis, an unrepeatable footballing life that represents a lone thread running right through English football's own brilliantly disorientating wonder years. This is a sport that has been violently refashioned in the past 30 years, a clanking Victorian industry regurgitated as relentlessly veneered global entertainment product.

Unblinking witness
Ferguson alone has been there throughout it all, not so much unchanging as endlessly adaptive: at times the hot dog seller in the foreground of history, unblinking witness to profound and irreversible change; more often than not right there in the front of things with his hands plunged right in up to the elbows.

His own footballing history is an almost complete compendium of the changes that have forged the modern game.

Ferguson started playing professionally when there was still a wage cap in operation. He was present in the stands at the Ibrox stadium disaster. He lived, briefly, the old-school publican's life of the ex-pro before going on to manage in those premodern days, the years of institutional neglect that seemed set on strangling the sport's familial core.

He curated English football's fiscally-driven transformation, not just winning the first Premier League, but breathing – via his vibrant young Manchester United teams – a life-giving brio into this new venture, providing the commercial revolution with a legitimising draught of new stories, new myths, new stars. And he remained in the vanguard through the full range of rapid fire cultural changes: foreign players, the shift towards Europe, overseas ownership, global brand building.

There are some standard means of ranking football managers. First is the combined weight of total trophies won. This can be weighted to suit an argument: some will point out that Bob Paisley remains the only manager to have won three European Cups (Ferguson has two). Brian Clough's starburst of success between 1977 and 1980, a league title and two European Cups, is perhaps more spectacular. Unlike Herbert Chapman in the early 1930s, Ferguson didn't revolutionise the way the sport was played or, like Don Revie at Leeds or Bill Shankly at Liverpool, take a team out of the doldrums and turn it into a European giant.

And yet, get back to the numbers game and there is nothing to suggest he wouldn't have done so had it been required. Ferguson wins hands down, staggering off under the combined weight of 13 English league titles, three Scottish titles, 16 domestic cups and four major European trophies. He has both the Scottish first division title and the Fifa Club World Cup.

Beyond this the other standard measure of managerial ultimacy is the sense of team-building and era-construction. This has long been the key to Shankly's greatness, a manager who created at Liverpool a new sense of shared identity with the club's support, a togetherness among club, city and match-day fans that defined the best aspects of the big city powerhouse clubs of the 1960s. Similarly Matt Busby, Ferguson's most obvious inhouse point of comparison, rebuilt United twice out of wartime rubble and subsequent tragedy.

Distinct and instructive eras
Working within a more regulated footballing culture Ferguson can claim to have forged an era or two of his own. First of all at Aberdeen, where his success in wresting the ascendancy away from Rangers and Celtic is a brilliant footballing story in its own right.

The team that beat Real Madrid to win the Cup Winners Cup crowned the first great Ferguson era: and they've kept coming ever since, interrupted only by those fallow first five years at Old Trafford when, during the dog days of 1989, some United fans called for him to be sacked. In the years since, Ferguson has repeatedly demonstrated his own greatest strength, the ability to continue to learn and evolve even in moments of triumph.

At the end he leaves not just an empty space, but a sense of broader endings. Ferguson's managerial strength was in the end bound up in his longevity, the ability to bridge and encompass such distinct and instructive eras. This is a school of managerial opportunity that is now closed. Nobody will ever do this again, just as nobody really manages like Ferguson at the top level any more, seeking to take charge of a club from top level down, a practice learnt from the arch, all-seeing eye of Jock Stein.

Alongside this, Ferguson has bolted on with great adaptive intelligence the full range of modern skills: control of the junior millionaire; a facility with agents, media and corporate overlords; and of course mastery of the wretched mind games, the relentless unsettling, as required, of his opposite number.

Just as the internal and textural workings of English football have altered completely on his watch, so Ferguson got there first and stuck his flag in. There are few things that don't bear his imprint in the Premier League, to the extent that something fairly dramatic is going to have to happen in English football to escape that lingering presence.

He may be gone, or about to go, but the likelihood is we'll still be playing Fergie-ball for some time to come.

Not to mention pottering in the shadow of a manager who is perhaps not just the greatest yet, but with the revolution now been and gone, and the role of the manager itself increasingly circumscribed, great in a way that cannot and will not come again. – © Guardian News & Media 2013