Conrad Koch gets it off his Chester 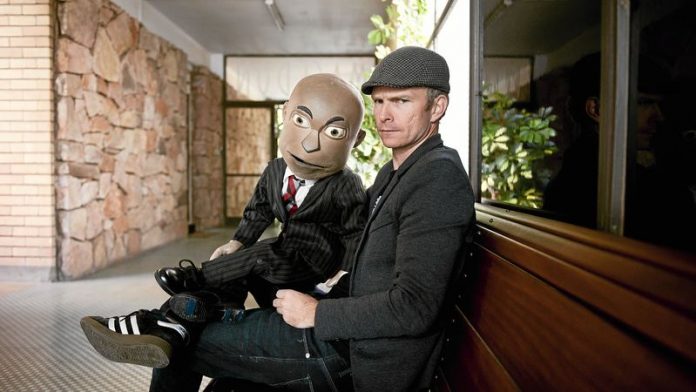 "I’ve got a master’s degree in anthropology, I’ve thought deeply about these things,” is a line Conrad Koch is having to use frequently these days. Chester Missing, or more accurately, Koch’s role as the hand behind the irreverent puppet turned “political analyst” and unhinged interviewer, is coming under increasing scrutiny.

It figures, as this puppet, who looks like a cross between the country’s president and his ultimately expendable former bogeyman, Julius Malema, has invaded our Twitter timelines and living rooms as part of the political satire show Late Night News with Loyiso Gola (LNN). The puppet also plays a big role in The Chester Missing Roadshow, running at the Market Theatre until June 2.

But this is not a conversation with a puppet but with a man who, by the very nature of being the white hand behind a brown puppet, has stepped into the landmine-fraught field of political correctness that is our rightfully race-sensitive society. It’s a ­conversation that Koch, a deft ventriloquist and stand-up comic, among other things, has resigned himself to having, albeit peppered with a variety of disclaimers.

Koch says Chester came about in the late Nineties as a rugby ball. “He was like a guy who told jokes,” he explains in a coffee shop in Rosebank, Johannesburg. “He didn’t really have a political agenda, he was just this guy. Then his identity evolved as I studied and ­finished an honours degree in anthropology.”

Koch maintains that Chester has always been coloured.

Chester, rugby ball, coloured? I pass up the opportunity to ask whether this was Koch’s own portable, inanimate former Springbok, Chester Williams?

He continues. “Back then there was just a little bit of politics, because my political mind was there but not yet clear. Then I did a lot of shows in the corporate world because in the corporate world you really see the lack of diversity and change. Chester actually got rented by SAA for two years in the early 2000s by André Viljoen, the then chief executive officer. The aim there was to question middle management.

“Everything you hear me saying, I say to corporates. This is what makes it fun. I can say things like ‘Aah, there’s no change; you’re just a sellout’, but in that environment there’s a change effect. But you have to get it right, you don’t want to be creating a catharsis — you know, the religion is an opiate of the masses kind of idea, where you lose out on the revolution because you diffuse it, sort of thing. What you try to do is provoke some type of a change using comedy on the one hand but, on the other hand, I’m just a comedian who tries to tell jokes.”

Talking back
Chester Missing landed a role on eNCA’s Late Night News with Loyiso Gola as a remedy for an awkward situation. “Loy interviewed [former government spokesperson] Jimmy Manyi, but when you interview a politician and you want to be funny, if you’re going to ‘dis’ them or have a go at them, you need a studio audience so you can have some sort of rapport, some playfulness. It’s a lot harder without a studio audience — unless you’ve got a puppet.

“The Jimmy Manyi thing was frustrating as far as funniness [goes]. So for the next show, Chester came in as a political analyst. For the next few seasons he was just this political analyst, but I knew there was an ability with Chester to answer back quickly — that’s something he’s quite good at — and answer politically about political stuff.”

But as Chester charmed, haran­gued and klapped politicians, others were paying close attention to the relationship between puppet and puppeteer. Would Koch even be able to broach half of the topics he gets away with on LNN if he wasn’t “hiding behind” the brown puppet?

Granted, Chester was not a reductionist stereotype of “colouredness”, but Koch, an admittedly middle-class, “liberalish” white man, was still passing moral judgment on mostly black politicians, doing it vicariously through a supposedly brown puppet of his own making.

The most eloquent critique came in January from a writer, TO Molefe, a contributor to the blog Africa is a Country. “If Koch wanted to be interesting, funny and advance the recognition of racial injustice at the same time, which he’s said he does, he should probably have a puppet modelled after himself: an irreverent, young white man with a rapier wit and a surprisingly refreshing take on race relations in South Africa,” wrote Molefe. “There are too few like him with access to a public stage … At the very least Chester Missing is an embodiment of the fear, unwillingness or inability of liberal-minded whites to use their own voices, faces and words to talk publicly about this country’s racialised privilege. That’s quite a burden to place on the tiny shoulders of Chester Missing.”

Koch didn’t respond directly to the writer, but in the show and during the interview you can tell that he was forced to ponder Molefe’s comments deeply.

“At which point, when I’m standing in front of corporate South Africa with a puppet and my lips moving just a little bit, is anyone confused that it’s me and not the puppet saying that stuff? Are you under the impression that Chester is a real person? Because, I mean, it is me.”

In the context of LNN, where Koch is absent from the frame, the question of “hiding behind” the puppet is still relevant. “Conrad works for a black show but they’re treating it like he’s the baas of us,” was the slightly irritated response of the show’s director Kagiso Lediga when the topic came up months ago. [ANC general secretary] Gwede [Mantashe] knows who Conrad is. [Public protector Thuli] Madonsela knows who Conrad is. So what are they Uncle Tomming?”

Directed by Heinrich Reisenhofer, The Chester Missing Roadshow represents, in some ways, the aftermath of Koch’s deep soul searching. It includes other characters like Hillary (a “snooty, Houghtony, out-of-touch” cougar “who thinks Morgan Freeman and Nelson Mandela is one thing”) and Ronnie (a rebellious reprobate “who is a bit like my subconscious as a puppet”).

In some parts where Chester and Koch play off each other, with Koch mockingly censoring his “spar”, it makes for thoughtful theatre, a sign of recognition that South African audiences, in some instances, are no longer prepared to laugh mindlessly.

Finding the Missing link between funny and passé