Paul Krugman goes against the grain 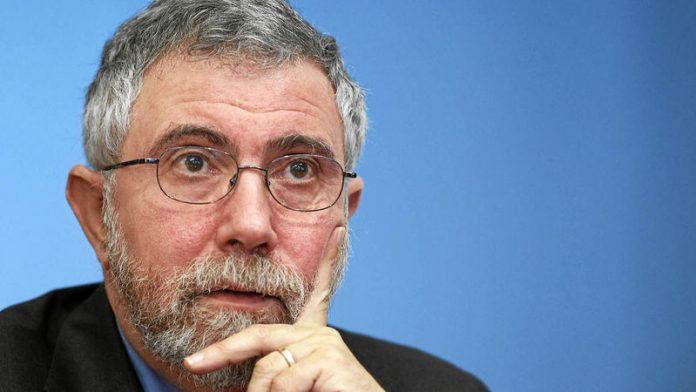 Paul Krugman has just passed one million followers on Twitter. Not bad for an academic economist; albeit one with a Nobel prize under his arm, a prominent position at Princeton University and a New York Times blog.

His following is a reward for ­battling the conventional wisdom that austerity can foster a recovery. From the moment that Lehman Brothers was allowed to crash in 2008, it seemed only Krugman, Joseph Stiglitz (another Nobel prizewinner for the liberal cause) and New York professor Nouriel Roubini, who had loudly predicted the crash, consistently confronted the "austerians" in Washington, Brussels and the United Kingdom.

More than four years on, austerity is being questioned as never before, not least because most countries implementing a deficit-reduction policy have failed to grow. Krugman, his blog and comments on Twitter have become the focal point for objectors worldwide.

Speaking to publicise the second edition of his book End This Depression Now, he says his battle will go on until policymakers realise their reliance on deficit reduction is a "delusional" misreading of basic economics.

Dismissive
For such a sophisticated thinker, Krugman's solution — which upsets some supporters — is straight­forward. Asked if he is concerned that a splurge of borrowing will trigger a repeat of the bubbles that caused the crash and spur inflation, he is dismissive. "As far as planting the seeds of the next crisis, bear in mind that leverage is still falling, so I don't see the problem at this point," he says.

In Krugman's view, concerns about ageing populations, looming health costs, the changing nature of the workforce in a digital age and competition from Asian economies for jobs are for another time. "Should we be having more spending? The answer must be yes. Why? Because there is plenty of slack in the labour market and investment needs to increase. To me it is clear that there is plenty of room to increase spending without increasing inflation.

"What many people fail to see is that macroeconomics moves much more slowly than they think. You can read academic papers from the 1930s and after you strip out the arcane academic language, they could be written today."

Misguided
Krugman says texts by economists such as Hyman Minsky, Michal Kalecki and John Maynard Keynes show Olli Rehn, the European Union's finance commissioner, is misguided in promoting austerity. Why reinvent the wheel, he asks, when today's economic problems were solved by theories developed in the 1930s. Minsky, for instance, argued that bankers and others simply forgot about the risks that come with higher debt levels. Forgetfulness is a cornerstone of Krugman's analysis of the crisis.

"I'd go with Minsky: that the best explanation of the crisis is simply that, with the passage of time, everybody, including policymakers, forgot about the risks. The economics profession in a way was part of the same phenomenon. Things like real business cycle theory, which considers recessions to represent voluntary withdrawal of labour in favour of leisure, would have been rejected as ludicrous when the memory of the Great Depression was fresh, but could flourish once it faded."

Five years after the crash, Rehn's failure is one of misunderstanding, he says. He dismisses concerns that Germany and the UK are run by politicians who want to protect their assets at the expense of people who depend on public services.

Failing
Robert Shapiro, undersecretary of commerce for economic affairs in Bill Clinton's second government, says Krugman has failed to win over many policymakers because he ignores concerns about the return of a housing bubble and the failure to tackle Wall Street's power. Voters are reluctant to hand power back to governments that led them into the financial crisis, even when it is not solely the politicians' fault.

"It is not irrational that support for government and government solutions has been badly damaged. Governments failed to see the crash coming along with everyone else," says Shapiro.

He backs the argument for a government spending boost, but urges Krugman to engage with concerns about what happens to that money.

"Some people say a fiscal stimulus will create a new housing bubble, but there haven't been many houses built in the last five years. They say workers have out-of-date skills. But history tells us that if you create jobs people will fill them," says Krugman.

Are central banks helping? "I wouldn't say that quantitative easing has been decisive. It is a fragile and fairly weak tool, so to ask it to override fiscal austerity is asking too much." But he wants more quantitative easing and is relaxed about inflation at 4% or 5%.

Accusation
Maybe the simplicity of his message is driven by daily bouts with Tea Party representatives and Republicans on his blog, and straight jabs from austerians on talk shows.

Recently he went up against David Stockman, Ronald Reagan's budget director. Stockman said much of the $1.6-trillion spent by the Federal Reserve as part of its quantitative easing policy was swallowed by Wall Street, and he pointed to JPMorgan, which made record profits last year. Reluctant to defend profits made by banks using quantitative easing funds, Krugman accused his rival of using "context- and model-free numbers embedded in a rant".

Those who argue that extra government spending could prove as beneficial as in the 1930s still want a little circumspection. Krugman refuses to play ball. — © Guardian News & Media 2013

How to recognise mental illness in children and adolescents