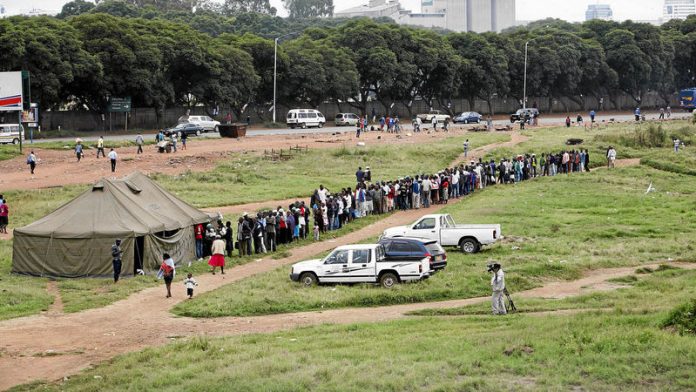 With 50 days to go before the unity government's tenure expires, political parties are drawing battle lines over dates for the general election.

President Robert Mugabe and his Zanu-PF party insist that the polls will be held on June 29, come what may.

But the bickering between Mugabe, Prime Minister Morgan Tsvangirai and Industry and Commerce Minister Welshman Ncube, who leads the smaller MDC-N party in government, over election dates has intensified infighting within the government.

Informed Cabinet sources say government principals and party leaders on Tuesday received a report from a committee comprised of Justice Minister Patrick Chinamasa and Constitutional and Parliamentary Affairs Minister Eric Matinenga on how to break the impasse over election dates.

"Chinamasa presented a report on the political and electoral processes which should inform us when the elections are going to be held," a senior minister who attended Tuesday's Cabinet meeting said.

"The report, which is a product of consultations with other political parties, and the agreed elections roadmap will tell us when the polls are going to be held."

At each other's throats
While Chinamasa and Matinenga are trying to come up with an addendum to the original roadmap brokered by the Southern African Development Community (SADC), their bosses, Mugabe and Tsvangirai respectively, as well as Ncube, are at each other's throats over when elections should be held.

Mugabe argues that the polls will be held on June 29, the day his five-year term and that of Parliament expires, because it would be unconstitutional to hold them after that.

"The clock is ticking. This is May. In June, whether anyone likes it or not, the time [for elections] will have come. The sun will have set for the Global Political Agreement [GPA]," Mugabe told the Zanu-PF central committee last Saturday.

"You do not run to countries even in Europe to prevent the sun from setting on June 29. Some are struggling to ensure that the sun should not move. The day is coming; unstoppable."

But Tsvangirai says that, whatever Mugabe thinks, elections will not be held on June 29. His spokesperson, Luke Tamborinyoka, told the Mail & Guardian this week that demands for elections on that date were just "idle talk".

"Every sane Zimbabwean knows that there can't be elections on June 29. It's not possible. That is why the principals, including Mugabe himself, appointed a team that includes Chinamasa and Matinenga to consult other parties and prepare a report on the electoral issues that will be discussed by party political leaders, including Ncube, to inform them on when the elections can be held," Tamborinyoka said.

"Besides, there are other stakeholders in this issue. There is the SADC and the African Union, the guarantors of the GPA, who must also be consulted on this issue."

Ncube said this week it was constitutionally and logistically "impossible" to have elections by June 29.

"All things considered, and if you follow the constitutional or legal requirements, the earliest date we can have elections is from mid-August," Ncube said. "It is impossible to have elections by June 29 if all the processes are strictly followed."

Ncube said that Parliament needs to first pass the new draft Constitution before Mugabe assents to it and it is gazetted into law. Parliament resumed on Tuesday to debate the draft and is likely to pass it next week.

Ncube said that Mugabe would consider the draft and sign it into law before it is gazetted. When the new Constitution takes effect, relevant sections dealing with elections will immediately kick in, and that will guide the 30-day mandatory voter-registration process.

Ncube said after that Mugabe is required to give at least 14 days notice before proclaming an election date. He said there must also be 42 days between the announcement of the election date and the actual voting day. "All this shows that elections can't be held by June 29," Ncube said.

Constitutional lawyer Derek Matyszak said even though the term of office for Mugabe and Parliament expire on June 29, elections could still be held within four months after that.

"Despite the dust that has been thrown up around the timing of elections, it remains clear that the five-year life span of Parliament ends on June 29 2013, according to Section 63 of the Constitution, at which time Parliament will be automatically dissolved," he said.

"Parliament may only constitutionally be dissolved earlier with the consent of the prime minister first obtained. Elections must be held within four months of the dissolution of Parliament according to Section 58 of the Constitution."