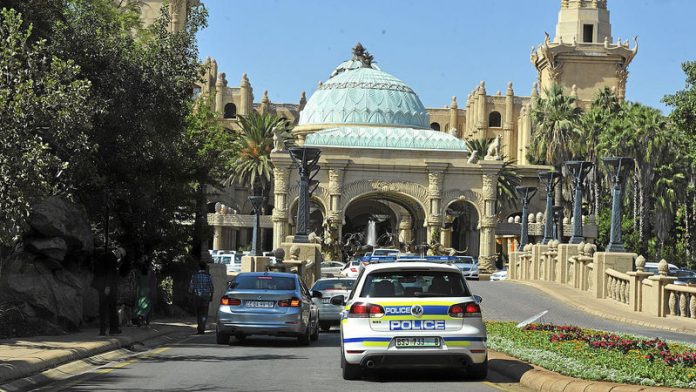 The suspended chief of state protocol, Vusi Bruce Koloane, is expected to be fired from his job for allegedly abusing his position and placing the country at risk by securing clearance for the Gupta wedding jet to land at Waterkloof Air Force Base.

Government sources in both the departments of international relations and co-operation (Dirco) and of defence say the multipronged government investigation, which was appointed last week, has shown that Koloane breached security by providing clearance for the Jet Airways A330 to land at a national key point. In doing so, he allegedly broke the law as he did not have executive clearance for this from Defence Minister Nosiviwe Mapisa-Nqakula, they said.

What is the plane truth?

No explanation has yet been found as to why Koloane would have risked his job at the department to hatch this laborious plan. The high-powered government investigation has apparently still not nailed down Koloane's motivation for facilitating the landing of the aircraft at Waterkloof.

"It's very difficult to prove if he received anything for organising this clearance," said the source from the international relations department. "But that is what will be investigated."

The defence source, who has inside knowledge, said discussions had been held about whether Koloane had "improper relations" that might have driven him to take these measures to secure clearance of the landing of the plane.

"That's the big question everybody is asking," said the source. "It will still need to be ascertained whether there were improper relations between him and other parties concerned."

This week Koloane refused to comment when contacted by the Mail & Guardian. "I am not talking to the media," said Koloane, before adding politely: "Sorry about that."

The government's report on the security breach is likely to be released next week.

Immediate effect
The M&G was told by the well-placed defence source that the members of the South African Air Force involved in allowing the plane to land at Waterkloof would not be let off the hook.

"Members of the air force will, at the very least, be reprimanded, if not axed," said the defence source. "While we have been told they received many similar requests from the same official and this one was considered to be above board, they should have applied their own instincts when they received a request for 207 people to land at Waterkloof. This is an abnormally high number of people. They should have received some sort of verification from high up."

According to the defence source, Koloane failed to state in his applications for clearance of the plane that it was a wedding party, and had broadly described it as government business. Among documents submitted to investigators is an email that allegedly reveals that Koloane facilitated the landing rights of the plane. It is being used as evidence against him.

Although Koloane had not received permission from Mapisa-Nqakula for the use of the military base for the wedding party, Waterkloof commanders were apparently unaware of this.

"Emphatically, he will have to be fired," said the international relations source. "It was him who gave the go-ahead and obtained clearance for the plane to land at Waterkloof."

Official investigations into the Gupta family's role in the affair have not been launched. The family has issued statements saying the office of the Indian High Commission had assisted in seeking permission for the landing of the plane.

"Nothing official has yet been done to look into the Gupta's role in all this. Whether it will go further, we don't know yet," said the defence source. "We are still trying to manage our relationship with India, and we hope that this won't affect our relationship."

Day-to-day contact
Businessperson Atul Gupta said the M&G should ask the investigators whether the Guptas were being investigated. "As we have said so many times, we respect the process currently under way and have co-operated fully. Should we be found to have done anything wrong we will take full responsibility for that transgression. Meanwhile, I am personally very sorry about the damage that has been done to relations between India and South Africa and, more worryingly, to the racial tensions built up over this matter. It was never our intention. All we wanted to do was give our daughter the best marriage we could," he said.

The Gupta family has close relationship with President Jacob Zuma and his son Duduzane, who has business ties with them. While concerns  have been expressed in the past by ANC members over the relationship, the use of Waterkloof for the family's wedding jet has galvanised the country.

No evidence has shown that President Zuma had had any prior knowledge about the plane landing at Waterkloof, the government sources claimed.

Koloane reported to the director general in his department and did not have day-to-day contact with the president, said the international relations source.

Yet what remains mystifying is that, with his vast experience as a former consul general in China and as former ambassador to Spain, Koloane could have expected to carry this out in secret.

The publicity machine around the wedding of Vega Gupta and Aakash Jahajgarhia began weeks before the four-day extravaganza at Sun City kicked off.

It appears, however, that Koloane's high standing at the air force base influenced the course of events. Described as "Mr Dirco" by a Waterkloof official who co-operated with the investigation, they had no reason to doubt him, a source with knowledge of the planned legal defences said.

The M&G was told that Koloane might also be blamed for encouraging the office of the high commissioner of India to write to the Waterkloof officials to back up his landing clearance efforts. The government has no record of a note verbale from the Indian High Commission notifying the international relations department of a visiting delegation requiring diplomatic assistance and aircraft clearance and landing rights.

Sasfin drops KPMG after 18 years over Gupta and Sars saga