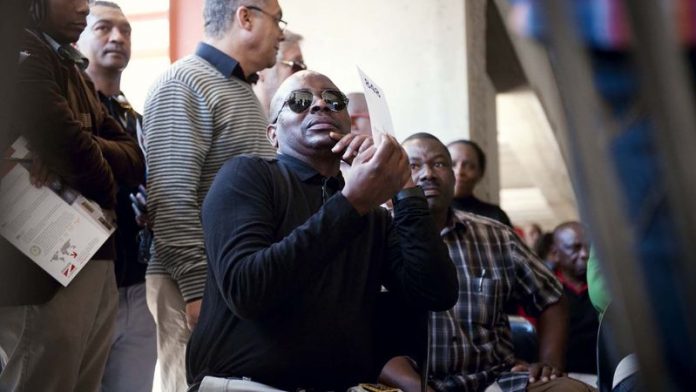 Except this time each twitch of a hand is greeted with the flutter of a battery of cameras. As with his rise, the media is there to record the former ANC youth leader's fall.

The house sits on a corner, opposite a preschool where kids whizz along on plastic scooters. The shell of a guardhouse welcomes guests into a parking area, under the kind of giant arch you see at a hotel entrance. A few bidders say they are considering it for their businesses.

Grey cement perimeter walls, the height of three people, block out any light. The cold shadows they cast around the house are the only space not built on. A solitary tree clings to life next to the deep holes where the wine room and infinity pool are meant to go. The red-brick patio around the tree is the only remnant of the house Malema knocked down to start his triple-storey folly.

Upstairs, open-plan rooms with wide spaces for windows all have views into the neighbour's yard, and look over the swimming pool. Estate agents will describe the views of the towers of Sandton from the domestic workers' quarters as "to die for".

The bidders, who all had to pay a R100 000 refundable deposit, sit in a long room in a wing of the L-shaped house. Their faces are lit by the constant flashing of cameras. At two points the auctioneer has to ask the cameras to move so he can see the would-be buyers.

Bidding starts at R5-million but quickly drops to R2-million, when the impeccably suited auctioneer has his first bite. Offers then climb in increments of R250 000. By R4-million it is clear that two people want it, and the increments decrease.

Five minutes later Norman Tloubatla (43), chief executive of Magnified Designs, raises a piece of paper in the air, claiming the house at R5.9-million, R2.3-million more than Malema paid for it.

He stays long enough to sign some paperwork, then rushes off to his white Porsche, refusing to comment.

Then talk turns to how over-priced the house was, and how frantic the journalists were. "I've never seen the paparazzi in action," says one man. "That winner is a new celebrity."