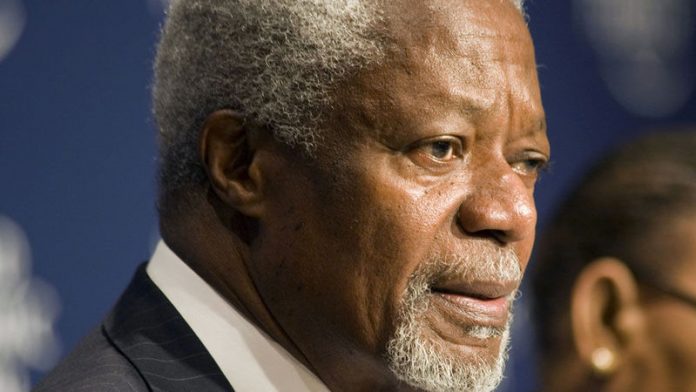 According to the panel's 2013 African Progress report at the World Economic Forum on Africa taking place in Cape Town, the continent is losing more through illicit financial outflows than it receives in aid and foreign direct investment.

It found that trade mispricing, or losses associated with the misrepresentation of export and import values, alongside other illicit outflows cost the continent $38.4-billion and $25-billion respectively between 2008 and 2010.

Annan called for a rule-based global system on tax transparency to be developed with the G20.

"All foreign-owned companies should be required to disclose the ultimate beneficiaries of their profits," he said.

Switzerland, the UK and the US – all major conduits – should signal their intent to clamp down on illicit financial flows Annan said.

He also extended this call to players from other developing nations who have become increasingly active in Africa in the oil, gas and minerals realm.

Poor governance of state companies
"Major investors in African extractive sectors such as China and emerging investors such as Brazil must also engage," he said.

The report raised concerns over the structure of investment activity by foreign companies operating in Africa.

It was characterised by the extensive use of offshore-registered companies and low tax jurisdictions, and in some cases the complex use of shell corporations.

"These arrangements come with weak public disclosure and extensive opportunities for tax evasion," the report said.

The revenues generated for major companies in many cases dwarfed the gross domestic product (GDP) of the countries they operate in.

'We are not poor'
But nowhere had a country lost out as much from this practise than the Democratic Republic of Congo (DRC), the report found.

It analysed five privatisation deals involving the sale of state-owned assets to foreign investors operating through offshore companies registered in the British Virgin Islands and other jurisdictions. The panel estimated that the losses sustained in these deals, through the under valuation of assets, was $1.3-billion – more than double the DRC's health and education budget.

This was in a country with the sixth highest child mortality rate, endemic malnutrition and seven-million children, out of a total of 11.2-million, not attending school.

These under-pricing activities however generated returns of around 500% for the offshore companies involved.

African countries needed to pursue greater transparency in the management of their resources according to Annan.

"We are not poor, we need to manage our resources better," Annan said.

"African governments can do better."

Fellow member of the African progress panel, Zimbabwean-born businessperson Strive Masiyiwa said the arrival of other developing nations on the continent such as China, Brazil and India had been "a positive game changer".

"But we also need to call on them to try … help us in creating the equity we are looking for," he said.

It would be good if these new players introduced legislation in the vein of the US's Foreign Corrupt Practises Act and Britain's anti-bribery laws to help achieve this he said.

Now is the time of monsters

Gigaba: ‘We’ll work within the law to transform SA’