The real threat to academe is internal 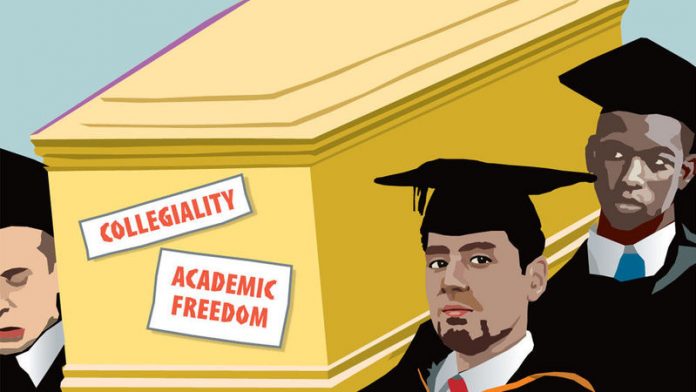 With the eruption of concerns about academic freedom in response to the ministry of higher education's establishment of a transformation oversight committee, it seems necessary to examine more carefully what in practice such freedom really means.

While the notion of academic freedom is regularly deployed in debates around the decisions of academics and the management of universities, its meaning is often remarkably vague and its use selective.

It is helpful to illustrate this by considering a similarly important term — "collegiality". An outsider to the academy might assume this to mean the positive spirit in which academics conduct the activities of a university: collaboration, intellectual vigour, tolerance of differing views, generosity of spirit and the like.

But as an insider one finds that "collegiality" is commonly invoked as an implicit threat by less-than-generously spirited managers or senior academics when individuals resist being strong-armed into doing things they should not actually be asked to do. It is also deployed as a nebulous claim — "X is not very collegial" — unscrupulous individuals use to sabotage the employment or promotion prospects of those they dislike. So much for collegiality in practice.

Regarding academic freedom, I find it easier to understand the concept as a collection of negative rights: not to have one's research, teaching (including grading) or public pronouncements restricted or interfered with. These protections are not without caveats: instructional content should not be unreasonably biased or depart too far from material relevant to the course; academics should not purport to speak on behalf of their institution unless formally authorised to do so; research should not violate ethical guidelines or generic professional standards.

One way in which such protections are abused is in stymieing efforts to introduce basic kinds of accountability: proper checks and balances; statements of correct day-to-day procedure and, especially, working mechanisms to ensure that these are followed, with regular examples of suitably weighty consequences if they are not.

These kinds of controls, relating to distribution of finances, hiring, teaching and grading principles, codes of conduct for public statements and the like, are often absent in many university departments.

Although likely to be opposed by those who are in positions of power or prefer not to have to be accountable to set standards, such mechanisms are important for competent, well-intentioned academics. Clear statements of powers and responsibilities are not only transparent but also protect individuals from excessive interference by managers or other ­academics within institutions.

Perhaps for historical reasons, South African academia appears to have an overriding concern with threats to academic freedom from one particular external actor, government, and perhaps an inadequate appreciation of the threats from some other external actors, such as private funders.

However, the glaring omission is protection from internal bias and interference, not just from managers — who may or may not be state functionaries — but from other academics. Let's return to collegiality for illustration. The American Association of University Professors notes that the use of the term in ­performance evaluations "has not infrequently been associated with ensuring homogeneity, and hence with practices that exclude persons on the basis of their difference from a perceived norm", and that "the invocation of 'collegiality' may also threaten academic freedom".

For the nonacademic to get a sense of the form such abuses take, I would suggest that the recent Judicial Service Commission interviews provide a fairly accurate analogy. There has been a good deal of outrage about that process, but academic appointment processes of a similar tenor are rarely exposed to such scrutiny.

When there is some recognition of such internal threats in the South African context, it is usually under the heading of "managerialism". In some cases this refers to genuinely excessive bureaucratic interference in academic affairs, but in others it amounts to a self-serving resistance by academics to imposition of the kinds of accountability I have referred to. When people are used to dispersing funds, manipulating grades and hiring people they find amenable without due process, it is natural that restrictions on such behaviour would be resisted.

The main point to make, though, is this: academic freedom, in South Africa in particular but in the academy in general, protects incumbents. It especially protects incumbents with seniority. The most powerful individuals within academia — typically certain kinds of academic

managers — are those who are not subject to adequate standards of accountability and frequently use "academic freedom" to shield their actions from such scrutiny.

Given this, the elephant in the room is the process by which incumbency is attained. Loudly defending academic freedom while saying nothing about what actually determines entry to, and progression in, the academy itself is a very special kind of omission.

When important principles such as collegiality and academic freedom are selectively used and abused in such ways, I would suggest that they are effectively dead. There is no less collegial department than one where the notion of collegiality is used as a partisan weapon, and no environment of intellectual inquiry less free than one where academic freedom is used to oppose transparency and accountability.

Academia has changed a great deal since the era in which principles such as collegiality prevailed. In much the way that "fair play" looks quaint in the light of Lance Armstrong's industrial doping machine, so too do some long-standing academic values look dated in the face of the many corrupting processes that have overtaken them.

These include a massive expansion of the academy and the transformation of the pursuit of knowledge into merely another career with hoops to jump through, boxes to tick and people to whom one is expected to ingratiate oneself.

Contrary to notions of collegiality and academic freedom we now have universities and academics fixated on obtaining greater and greater amounts of public and private funding. Individuals choose academic careers because they like the lifestyle and wage but have no intellectual passion for their subject. Academic papers are published to bulk up publication or citation counts and institutional rankings; research results are oversold (or even faked) to claim "impact" or make quick jumps up the career ladder; and so on.

All this has salience for how members of the public, policymakers and indeed academics themselves should think, realistically, about universities as institutions. To compound matters, in South Africa we have the additionally corrupting histories of colonialism and apartheid, with the accompanying insularity and mediocrity, to add to the broader trends that have corrupted aspects of academic practice.

Given all this, it is hard to assert that the cry for academic freedom should have credibility in the public discourse. The modern academy sullies us all. If we are interested in defending academic freedom in its substantive sense, not just defending incumbency but addressing problems with the acquisition and use of incumbency itself, we would do well to direct similar energies to improving the quality and integrity of the academy itself.