"The move could see thousands of people dependent on the project losing their source of livelihood," said the Congress of South African Trade Union's investigative branch in a statement on Wednesday.

"The threats are contained in an extremely disturbing email in Corruption Watch’s possession. The email is addressed to Mr John Ngobeni, a senior official in the department of cooperative governance and traditional affairs."

According to the statement: "The email was written by Mr Phiwa Mathenjwa, on behalf of Ubuntu Sima, the company subcontracted irregularly by Mvula Trust in the R30-million deal.

"Earlier this year a Corruption Watch investigation revealed that Mvula had won a government tender eligible only for non-governmental organisations but had subcontracted the implementation tasks – accounting for about 60% of the tender value of R30-million – to a for-profit company, Ubuntu Sima. In the tender application, Cogta was kept in the dark about the identity of the subcontracting company and the unusual extent of its involvement in the project. Cogta did not ask for this vital information either."

The email in question advised the department of cooperative governance and traditional affairs that as of May 14, Ubuntu Sima would no longer be performing the vital implementation tasks assigned to it by Mvula due to a dispute between the two parties.

"Starting about five months ago, Corruption Watch repeatedly informed the department of cooperative governance of these gross irregularities in the tender. However, we received no response. In recent weeks, the minister of cooperative governance and traditional affairs has established an inquiry to examine these aspects of the community work programme," the investigating branch said.

"Corruption Watch has been invited to make submissions to this inquiry, which has until June 15 to report back its findings."

Corruption Watch on Wednesday said it believed that if the community work programme was to be rescued, the interministerial committee responsible for overseeing the programme must assume responsibility for it  – at least until the department's "questionable role in the awarding of this tender has been investigated".

“While we believe that a detailed investigation is undoubtedly necessary, events on the ground have rendered this a luxury insofar as this vital programme is now threatened with imminent collapse in at least in three provinces. Government needs to act with extreme urgency if this programme is to be saved," said Corruption Watch's executive director Davis Lewis.

"There are rules governing tender processes precisely to avoid this outcome. When the rules are flagrantly ignored, as in this case, we need to ask ‘why’ and ‘in whose interest’ have the rules been bent? Those responsible for this must be brought to book."​ 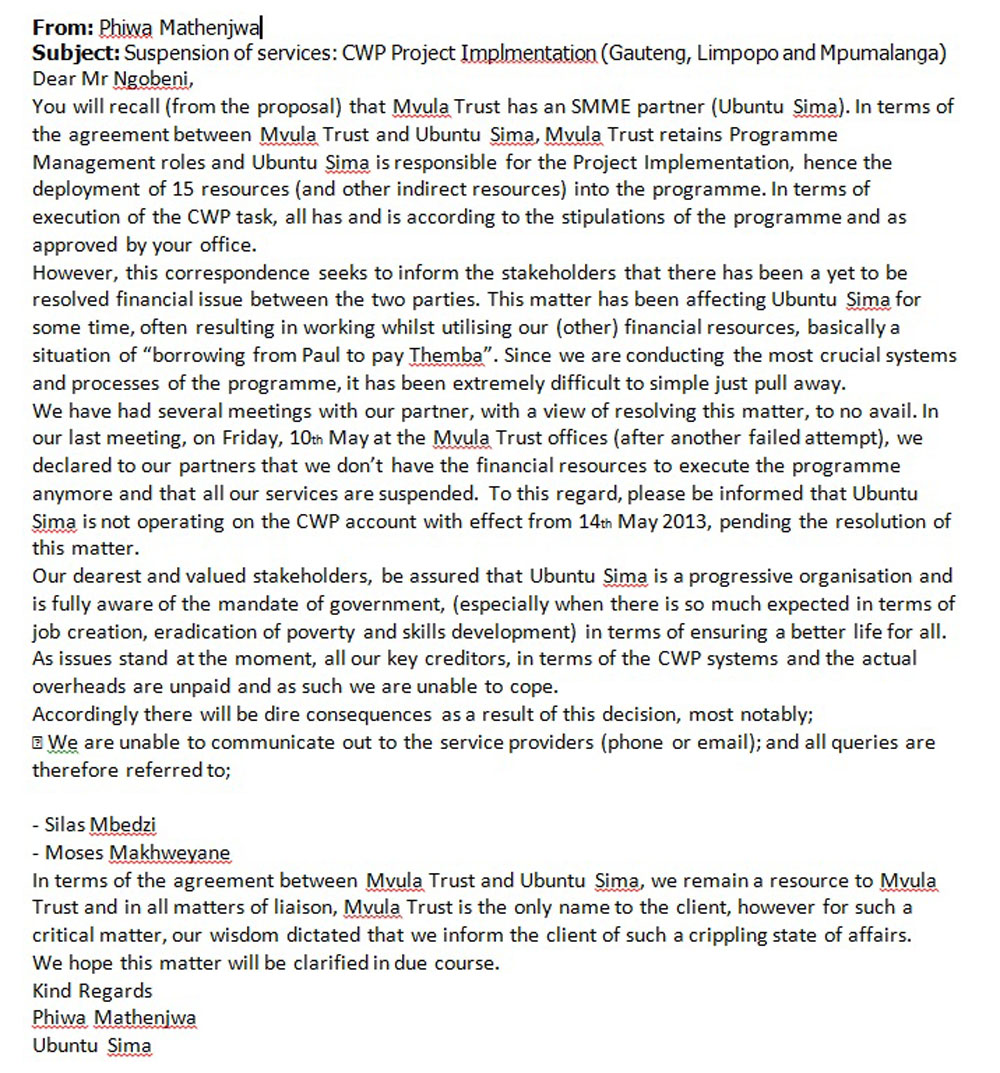