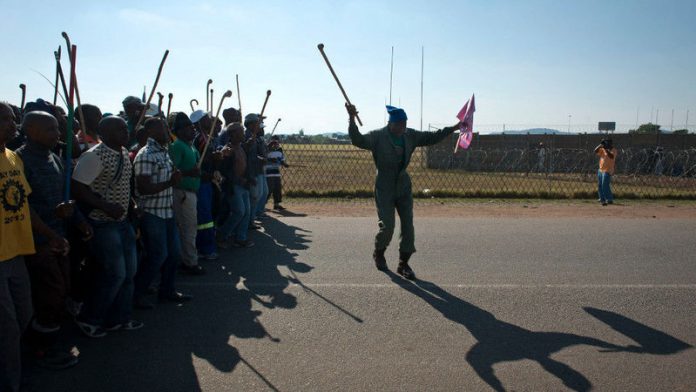 The last-minute agreement by Lonmin workers to return to the shafts at the company's Karee mine at Marikana in the North West may have offered the country a momentary respite from the sense of foreboding hanging over the platinum industry. But the sense that the worst is yet to come for unions Association of Mineworkers and Construction Union (Amcu) and the National Union of Mineworkers (NUM) – and by extension the mining industry – is slow to abate.

The somewhat impromptu strike led by Lonmin miners entered its second day on Wednesday, and its proximity to the koppies where 34 miners were shot dead by police last year, combined with fuming tensions between rival unions Amcu and the NUM threatened to push the workers' emotions to violent expression.

Observers were thus offered reprieve – albeit tempered – on Wednesday afternoon, when the workers filed peacefully out of the stadium. No new blood was spilled and workers seemed to have agreed to return to work by Thursday morning at the latest.

Any other outcome might have sullied Amcu's reputation in the minds of its critics and ensured the entrenchment of a caricatured image as a union unable to listen to reason when it matters most.

But calls for calm from Amcu and the NUM seem almost secondary to the broader effects the uncertainty of this week's strike is likely to have on the mining industry. This is the view of industry analyst, Peter Attard Montalto, from investment banking group Namer Holdings.

Said Attard Montalto: "The NUM is publicly calling for calm, but internally we think it is very alarmed at the further erosion of its position, and while it has so far clearly dismissed the use of violence and illegal strike action locally, its control over more localised groupings of members is unclear,"

The NUM did not respond to requests for comment.

Risk of uncertainty
Attard Montalto pointed out that the sense of foreboding in the industry was exacerbated by the fact that the main round of bargaining for wage increases had not even started yet.

He said there is also a risk that the uncertainty at Marikana could spill over into coal production at Eskom.

"Strikes at the Medupi power station building site remain endemic too," he said.

"Contagion in the wider economy remains more of a risk now than it was last year because of the timing of the wage round. Police distrust remains very high because of evidence emerging at the Marikana commission into the tragedy of last year. Government leadership remains poor. We should not forget that Impala, and others in the platinum sector and other mining areas, are also considering sweeping restructurings similar to Amplats. This is therefore only the beginning, in our view," he said.

Attard Montalto was referring to Amplats's announcement last week that 6 000 jobs would be cut at its operations. Amcu has vowed to fight these tooth-and-nail.

He said the possibility of unprotected strikes across the platinum belt could also not be ruled out.

The sense that unions are not completely in control of their membership does not ease tensions, either. For example, at Lonmin, Amcu workers caught even the most vigilant labour observers – their shop stewards – off guard on Tuesday morning when they did not arrive for work.

Lonmin management issued a statement then, confirming that no workers went underground, and that it remained unclear what the worker's demands were. It later emerged that Amcu demanded that NUM close its offices, as the former is now the majority union at the Lonmin mine.

Murdered organiser
But this had been the status quo since October, and Amcu's national treasurer, Jimmy Gama, ventured a guess that the workers were spurred into action by the murder of an Amcu organiser, Mawethu Joseph Steven.

Steven seemed to enjoy the affection of Amcu members on the mines, having wrested much support away from the NUM following his dismissal from that union in 2011. He was shot dead at a tavern near Marikana on Saturday.

It could not be denied, said Gama, that the Steven's death presented an opportune moment for Amcu to voice its anger at the NUM and Lonmin's management, for its handling of the handing over of majority recognition status from the NUM to Amcu.

But Amcu president Joseph Mathunjwa's pleas to the workers on Wednesday to call off the strike and return to work, fell on fertile ground. Indeed, the workers dispersed peacefully following his address, with the understanding that they would return to work on Thursday morning while negotiations proceeded.

With that, Amcu, previously described as a union that is militant, even "violent" by the NUM, momentarily countered its critics. There were no reports of violence throughout the two-day strike, despite fears that workers would want to avenge Steven's death.

Mathunjwa seemed to acknowledge the workers' frustration and grief in his tone, while his speech was peppered with references to the distrust Amcu harbours towards the NUM and Lonmin.

But he did not encourage their actions. Instead, he pleaded for peace and for workers to return to the shafts underground.

Fear of violence
?Mark Munroe, Lonmin's executive vice-president of mining, said the company had increased the number of random weapon searches and investigated all allegations of firearms being held in union offices. None were found, Munroe said.

But the perceived threat of violence on Wednesday caused many journalists to sit outside the stadium in the safety of their cars amid mumblings that they would not be safe inside.

Police, too, kept a safe distance. A minimal presence kept careful watch over the crowd, with no sign of the ama-berette – the beret-clad Tactical Response Team that deals with high-intensity crime situations.

Even the helicopter circling the area did not belong to the police. It turned out to belong to a private security company, the same one used by Lonmin.

And so, while the strike is momentarily paused, the simmering tensions between Amcu and its rival the NUM, are far from relieved.