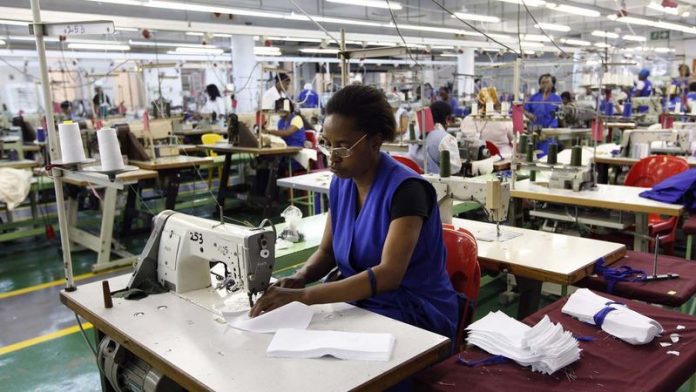 It's not luxurious, but Goldfinch Garments, the Chinese-owned South African factory where Sindisizwe Zwane works nine hours a day, is far from the idea of a sweatshop: the ventilation is decent, the lighting is good and basic safety measures are in place.

South Africa says its garment industry is better regulated and workers are better paid than in ultra low-cost producers in Asia, such as Bangladesh, where the collapse of a factory killed more than 1 100 people last month.

The ANC-led government, with close links to labour unions, wants to go further by enforcing a wage agreement that would guarantee Zwane and her co-workers a raise. But the garment industry has already lost three-quarters of its jobs in the past decade as cheaper imports have flooded the local market. Zwane (28) and one of only two wage earners in a family of 14 people, fears that efforts to win her a raise could cost her livelihood.

"Of course I want more. I want a whole loaf of bread instead of the half I am getting. But half a loaf is better than nothing," said Zwane. "If I lose the job, we lose everything."

Zwane is one of about 250 workers at Goldfinch, one of a cluster of clothing factories in the hardscrabble industrial town of Newcastle, KwaZulu-Natal.

Goldfinch appears safe and clean. The factory has rows of sewing machines where a workforce of mostly women spends hours stitching together clothes. Workers often bundle up on colder days and some cover their faces with cloth to protect them from dust.

Zwane can earn as much as about $220 per month, with her income depending on how many orders come in.

The government-mandated minimum would guarantee her at least $238 a month regardless of how many orders the factory received. That compares with monthly minimums as low as $38.50 in Bangladesh or $80 in Cambodia.

Government argues that if industry is allowed to skirt centrally negotiated minimum wage rules, millions of black workers will become locked into a lifetime of cheap labour little different to apartheid.

Uncompetitive
Nearly two decades after the end of white rule, Africa's biggest economy still has millions of unskilled workers, nearly 40% of its population living on less than $5 a day and half of adults out of work.

Labour laws place a heavy emphasis on collective bargaining and allow the labour ministry to mediate between unions and industry in the Bargaining Council to set minimum wages for specific sectors, which apply across an entire industry.

Small and medium-sized companies like the Newcastle textile firms complain that they are excluded from the negotiations and compelled to adopt wages agreed to by large, well-funded firms and big unions with political ties to the ruling ANC.

"The Bargaining Council system will ruin South Africa. The wages are not linked to production," said Alex Liu, a garment maker who has been in South Africa for nearly 20 years and heads the Newcastle Chinese Chamber of Commerce and Industry.

Newcastle has fared better than many parts of the country, losing only half its clothing jobs in the past decade, largely because its factories pay 10% to 50% below the Bargaining Council minimum wage, drawing the ire of government and unions.

'Close down'
Liu, along with other garment makers who were not a part of the talks, have taken the labour ministry, a major union and the Bargaining Council to court, saying the wages forced upon them are driving factories out of business.

The government says it wants to keep plants running.

"It is not the intention of the Bargaining Council or the department to 'close down' factories," said Ian Macun, head of collective bargaining at the labour ministry.

"On the other hand, employers are obliged to comply with applicable legislation."

Loane Sharp, a labour expert at employment firm Adcorp, said the system does seem to benefit bigger companies, who can use the collective bargaining principle to hurt smaller competitors.

'In public interest'
"In principle, those in the Bargaining Council are supposed to work in the public interest. But in practical terms, the participants gang up on small- and medium-sized enterprises by agreeing to wages that are unrealistic," said Sharp.

South African textile wages are not only far higher than in parts of Asia, they are also about double those in many other African states. As South African factories have closed, new ones have opened in Lesotho, Swaziland, Kenya and Mauritius.

"Our biggest competition is not Asia or Bangladesh. It is neighbouring Lesotho and Swaziland," Liu said.

Liu's Wincool factory has tried to defuse the government opposition by introducing a profit-sharing co-op system. But even Wincool was shrunk from 300 full-time jobs to 100.

"It's better for a lot of people to have a little than nothing at all," said Joseph Kunene, a co-op member at the factory. "But most people in Newcastle have nothing." – Reuters

Cricket World Cup: Do the Proteas tick all the boxes?