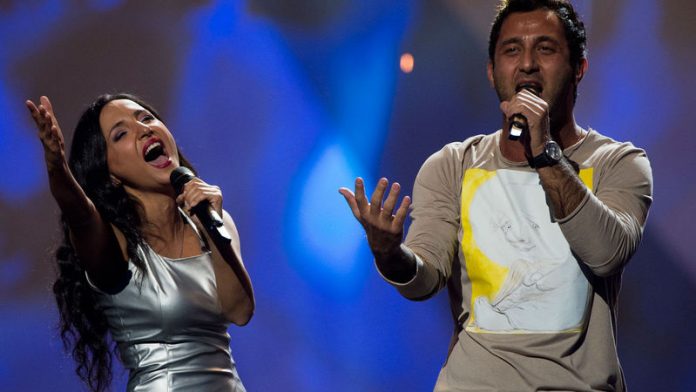 ABBA's Benny Andersson and Bjoern Ulvaeus are expected to appear at the show.

As betting sites tipped Denmark's entry as this year's favourite, rehearsals on Friday also showed a video of Paris Saint-Germain striker Zlatan Ibrahimovic welcoming viewers to the immigrant-heavy city where he grew up.

ABBA's songwriting duo has penned a special Eurovision anthem together with Swedish DJ and producer Avicii to open the three-hour live broadcast. Last year, the finals were watched by 125-million viewers, making it a bigger television event than US football's Super Bowl.

Hopes for a reunion of the Swedish supergroup were raised once again when Loreen won the competition in Azerbaijan last year with the infectious dance tune "Euphoria", thus bringing the annual music contest to the Nordic country for the fifth time.

The rumours gained more traction in April after Agnetha Faeltskog told a British magazine she had talked with fellow ABBA singer Anni-Frid "Frida" Lyngstad about singing together again. But Ulvaeus was shortly afterwards quoted as saying a reunion was "never going to happen".

ABBA are widely seen as being the ultimate Eurovision group, having leveraged their 1974 win "Waterloo" into one of the most successful pop careers of all time.

If the bookmakers' predictions are anything to go by, next year's contest will move just eight kilometres across the Oeresund bridge to Denmark, the home country of Emmelie De Forest. Her Only Teardrops became the only odds-on candidate this week.

"I'm flattered people think I will win. I try not to think about it too much," the 20-year-old singer said at a joint press conference with Sweden's Loreen on Friday.

Among the more bizarre entries are Ukraine's Zlata Ognevich who is carried on stage by a 2.34m tall "giant"; and the falsetto disco of Romania's Cezar, who wears a vampire-like outfit.

Welsh balladeer Bonnie Tyler is the biggest name to participate this year, but despite being backed by superstar songwriter Desmond Child, the 61-year-old singer isn't expected to nab the top spot.

Several countries in austerity-hit Europe, including Poland and Bosnia-Herzegovina, have opted out of the event this year.

Greece had initially said it wouldn't be able to take part, but reversed its decision after a private broadcaster stepped in to finance the production of the country's national final.

Alcohol Is Free by Koza Mostra and Agathon Iakovidis uses metaphors to describe Greece's suffering during the economic crisis that has threatened to sink its economy.

The stage is also set for not one but two gay kisses, which could ruffle feathers in Europe's more socially conservative nations.

One of the intermission acts during Friday's final rehearsal showed two male Swedish folk dancers kissing each other.

Not to be outdone by the Swedish public broadcaster, Finland's Krista Siegfrids is expected to do the same with one of her female dancers when she sings gay marriage anthem Marry Me.

Sweden has pledged to scale back the annual music competition after costs soared in recent years.

Some estimates put the price tag for regenerating last year's host city Baku at $1-billion. By comparison, the Swedish organisers have a budget of $18.7 million.

Sweden is however one of the countries that each year takes the contest incredibly seriously, using an intricate system of semifinals over several weeks to allow the public to vote on its entry. – Sapa-AFP