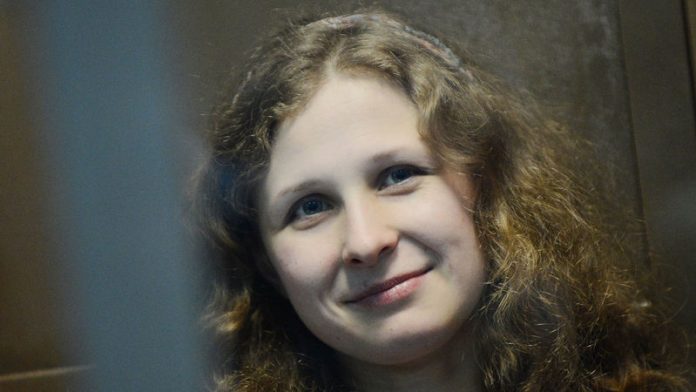 She and bandmate Nadezhda Tolokonnikova are serving two-year prison terms for bursting into Moscow's main Russian Orthodox cathedral in February 2012 and singing a profanity-laced "punk prayer" urging the Virgin Mary: "Throw Putin out!"

Speaking by a video link from prison, Alyokhina told the court considering her request for release on parole that it had violated her rights by not allowing her to take part.

"In protest against the court's refusal to allow me to appear in person to take part in the hearing, I'm going on a hunger strike," Alyokhina said.

"In the current circumstances I forbid all my lawyers and representatives to take part in this court hearing".

Hooliganism
The judge at the court in Berezniki, the Ural Mountains town more than 1 000km northeast of Moscow where Alyokhina is serving her prison sentence, adjourned the hearing until Thursday.

Alyokhina (24) and two bandmates were convicted of hooliganism motivated by religious hatred last August after a trial seen by Putin's opponents as part of a clampdown on dissent during a third term in power he began in May 2012.

Western governments and many entertainers, including Madonna, said the sentence was disproportionate but Putin, a former KGB spy who has cultivated close ties with the Russian Orthodox Church, said the state needed to protect the faithful.

One of the three women jailed, Yekaterina Samutsevich, was freed last October when a judge suspended her sentence on appeal after she argued she had been prevented from taking part in the protest because a guard seized her.

Tolokonnikova (23) was denied parole last month and both she and Alyokhina have had requests for their sentences deferred until their young children are older rejected by courts. They are due for release next March. – Reuters

The country needs an institute that will be a conduit for AI knowledge to industry, society and government
Read more
Opinion

Russia is the clumsy latecomer at Africa’s superpower party

Golunov, a 36-year-old investigative reporter was detained last week over allegations that he manufactured and dealt drugs
Read more
Advertising
Continue to the category
Coronavirus