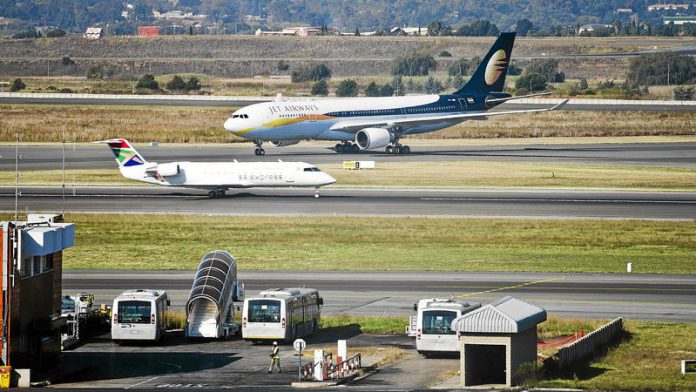 "Clearly," the government authors write, "someone is not telling the truth."

That is a rather obvious deduction, given the contents of the 30-page report into what went wrong to allow a private plane, ferrying wedding guests, to land at the country's top air base.

That reference is to a dispute of fact between two of the government employees (now suspended) who ended up carrying most of the blame for the scandal: chief of state protocol Bruce Koloane, and Lieutenant Colonel Christine Anderson, who is stationed at Waterkloof.

But it may equally have applied to what is now a direct contradiction between the South African government and the Indian High Commission. On Tuesday, the commission issued a statement to say that the Gupta wedding party had included one man on official business; Uttar Pradesh State Minister Shivpal Singh who had met with the Free State government and had signed an agreement of cooperation in areas such as irrigation and economic development.

As the Mail & Guardian reported some weeks ago, such official business would have constituted a diplomatic cover for what was, in essence, a private visit.

But even that cover has been blown, according to "Landing of a chartered commercial aircraft at Air Force Base Waterkloof", as the report is titled.

The report also contradicts information previously published by the M&G. It finds that formal, diplomatic attempts to secure Waterkloof as a landing spot for the chartered Jet Airways plane were only initiated in early April. "Between 2 and 4 April 2013, the approach transitioned from one characterised by the involvement of government officials in a family matter to an official diplomatic approach," the report reads.

However, the M&G has seen a formal letter of request from the Indian High Commission on the matter dated late February.

But some of the most curious details in the report has little bearing on the guilt or innocence of parties, or on a dispute between governments.

Why were no customs officials at Waterkloof to screen around 200 guests who arrived on the plane? Because the air force had sent a fax notification to the private fax-to-e-mail number of a South African Revenue Service (Sars) employee who had left that organisation more than a year before. That employee, it turns out, had been kept abreast of the arrival of VIP flights at Waterkloof for all that time.

A similarly comical security breach occurred at the airport itself, when an "unvetted" company was given access to decorate the arrivals hall. There is no indication that this party company made off with munitions as it packed up the ribbons.

Then there is the fate of one member of the airplane crew, who passed through Waterkloof, but never flew back to India. He or she is presumed still at large in South Africa, in what could, conceivably, be one of the most entertaining hangover wakeup stories of all time.

Then, there is the fate of the those government ministers who chose to attend the wedding, despite official warning not to. In the afternoon of May 1, the report says, a committee decided that ministers should be warned not to attend. Whether those who failed to heed the warning were reprimanded in a stern tone of voice is not recorded.

In a touch of balance, the report also seeks to lay to rest one of the more entertaining stories reported around the fiasco: that the Gupta-chartered plane had flown low over Pretoria to give the guests a nice view of the Union Buildings, and in doing so had disrupted normal air traffic.

"Air traffic controllers did not notice anything unusual … in the behaviour of the flight," the report says.