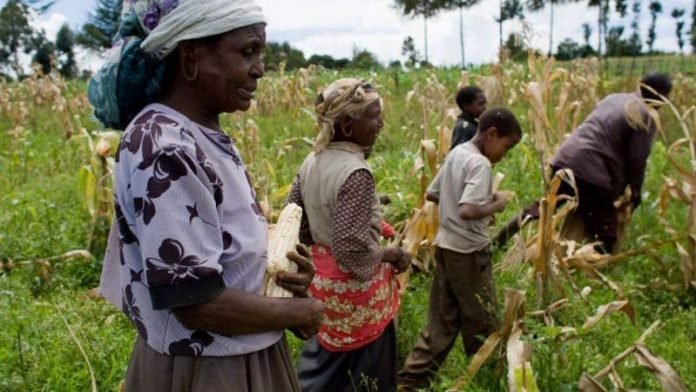 John Mwangi stands in his wooden shed counting bags of maize neatly bundled in burlap. The 90kg bags sit on slats raised two feet off the earthen floor, protecting the maize from damp and rodents. A few hens scratch the earth, pecking at the grains that have fallen out.

The 44-year-old farmer finishes counting at 149 and takes out his cellphone. He enters the number into a message and hits the send button. A few seconds later, he receives a text message with the latest price of maize in Nairobi. He puts the phone back in his overall pocket, content that he knows how much he will earn from these bags of maize.

Mwangi is one of 6 400 farmers in Kenya taking advantage of this new high-tech service, powered by M-Farm, according to Jimmy Wambua, an M-Farm spokesperson. Three young software developers in their early to mid-twenties started the company in 2011 to provide market prices to farmers. Previously, Mwangi sold his maize to brokers that arrived with trucks and dictated the maize price. He had no way of finding out the actual market price and often felt cheated. Now, not only does he know how much he can demand but he is able to come together with other farmers and command higher prices.

M-Farm is one of many services that have been developed in the last five years on the back of Kenya’s lead in information and communications technology (ICT), particularly mobile phones. An increasing number of young Kenyans are developing software, apps and cellphone-based programmes to help small-scale farmers increase their agricultural skills and yields. At the most recent PivotEast, East Africa’s premier mobile start-ups competition and conference, held in June 2012, three out of five finalists were young entrepreneurs who had created agrarian apps.

Agriculture is the backbone of Kenya’s economy, earning over 24.2% of the country’s $33 billion GDP and employing 75% of the country’s workforce. Farmers, mostly working on smallholdings of less than five acres, produce the bulk of Kenya’s cash and food crops such as tea and coffee, the country’s largest agricultural exports, and maize, Kenya’s staple. While their production is quite considerable, Kenya’s rural areas remain the country’s poorest.

In addition to the price information, M-Farm offers farmers the chance to sell their crops collectively and to buy their seed, fertilizers and other inputs together, simply by using their mobile phone or logging on to the M-Farm website. Each M-Farm agent aggregates the produce of about 100 farmers and sells it as one lot. The agents also sell seeds, fertiliser and other inputs in bulk at discount prices. Everyone gains as the farmers earn more for their crops and the bulk buyers and sellers reduce the number of farms they visit.

M-Farm collects wholesale market price information on 42 crops in five markets in Kenya: Nairobi, the capital; Mombasa, on the coast; Kisumu, Eldoret and Nakuru in the west. The company employs two full-time college-educated independent agents to collect prices from wholesale traders located in each market. Farmers can then use a free mobile app or send an SMS request to see the latest information on specific crops.

iCow
Another mobile phone service is iCow. One of its products helps beef farmers track their cows’ gestation periods to increase livestock numbers. Farmers use an SMS code to register their cows and their insemination date. The service then sends SMS prompts to the registered farmer on the expected date for calving, or the best days for new insemination. The service also sends weekly SMS messages to subscribers with tips on breeding, nutrition, milk production efficiency, and other best dairy practices.

iCow also posts the location of the nearest veterinarian or artificial insemination specialist on its website, or sends farmers an SMS with the information. Through its iCow Soko (market in Swahili) farmers can trade livestock and livestock by-products on their cellphones.

Kilimo Salama
Another web and mobile-based tech programme is Kilimo Salama, which means “safe farming” in Swahili. Run by the Syngenta Foundation for Sustainable Agriculture (SFSA), part of a Swiss agribusiness operating in 90 countries, in partnership with UAP Insurance of Kenya, and Safaricom, Kenya’s biggest mobile network operator, it offers crop insurance against drought or excessive rains. Smallholders purchase cover through local agro-dealers while buying their seeds, fertiliser and insecticides. Using solar powered weather stations, Kilimo Salama collects information about extreme weather that may reduce yields and sends farmers these reports via SMS.

If the company’s climate station registers extreme weather, it sends insured farmers a mobile money payment that covers the costs of their seeds, fertiliser and other inputs such as insecticide that have been insured. Even if the entire crop is lost, the insurer provides the farmer with the funds to buy next season’s seeds.

Premiums are calculated based on the area’s drought risk. Farmers split the price with seed and other agribusinesses by each paying 5% on average on top of the price of a bag of seeds. According to the SFSA website, a farmer can insure a $2 bag of seed for ten cents. If there is a drought, for example, the farmer will receive a pay out of two dollars for each bag and can begin afresh at the next growing season. Through Kilimo Salama Plus, farmers can also insure their total anticipated harvest value by paying the full premium amount.

M-Pesa
​Safaricom's M-Pesa, a mobile phone money transfer system, has been at the forefront of Kenya’s agri-technological innovations. About half of Kenya’s estimated 43 million people use M-Pesa. Not only can farmers make and receive payments for seeds and crops, but financial institutions, such as savings and credit co-operatives and microfinance schemes, can disburse loans and collect payments. Almost all financial institutions in Kenya now offer M-Pesa services. Coupled with the company’s saving and credit service, M-Shwari (cool or calm in Swahili), M-Pesa is also bringing farmers into the formal banking system.

Have farmers benefited from this information and communications technology innovation? Yes. Technology has boosted farmers’ earnings. Access to market information through cellphones led to an increase in farmers’ incomes of between 16.5% and 36% in Uganda, and 10% in Ghana, according to a 2012 World Bank report. A recent Vodafone report estimates a potential increase of $48-billion in agricultural income in Africa by 2020 due to the spread of mobile technology.

“Farmers previously got from 5 shillings [$0.06] per kilo for snow peas, 40 shillings [$0.48] if they were lucky. Now, they get up to 90 shillings [$1.07] per kilo,” he says. M-Farm-subscribed growers also say that access to current market information has given them a transparent bargaining platform to use when selling individually to brokers or middlemen.

Agricultural IT
Innovation in agricultural IT is concentrated in two areas. The first is delivering via mobile phones information such as market prices and tips to improve crop and animal husbandry. The second is extension of financial services, such as M-Pesa’s mobile money system. While these innovations have greatly improved access to market information and financial services, there remains a massive gap in improving access to markets once the crops are harvested.

The typical chain for horticultural produce in Kenya involves a series of middlemen ranging from transporters to wholesalers to retailers. Streamlining this often cumbersome and lengthy process would provide farmers with higher prices and consumers with cheaper products.

The Kenyan government has also jumped on the ICT bandwagon. In April 2013 the agriculture ministry announced that it would collect and distribute real-time market information to farmers. Over the next 18 months, the government plans to supply 1 450 laptops and smartphones to agricultural extension officers to collect and post these reports.

But it is technology driven by the private sector that is making significant strides in helping farmers. Kenya’s agriculture will require considerably more government support in the future.

This article first appeared in the May 2013 issue of Africa in Fact, the journal of Good Governance Africa.

Digital learning is good – but not for all students