Cape Town: Working it out at Frankie’s 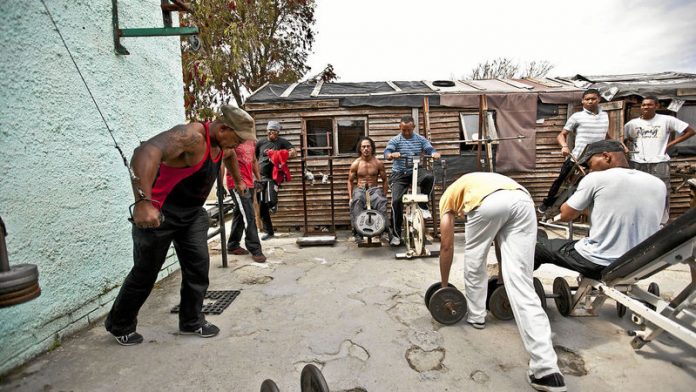 Locals call it Gaza, a term used on the Cape Flats for bloodshed – and there are definite similarities.

The suburb of Rusthof is a place that is strafed by ­poverty, unemployment and almost ­perpetual violence. The hot, sandy and windblown streets are where people socialise because the houses are small and tightly packed together. The names of gangsters are scrawled along vibracrete walls, demarcating their turf, and young children play gangsters in streets that are already too familiar with violence.

Rusthof and neighbouring Casablanca lie on the outskirts of the fancy seaside suburb of the Strand, Cape Town, and are home to about 60% of the Strand’s total population.

In the Strand, gyms have become the cathedrals of middle-class suburban­ites. In Rusthof, Frankie’s Gym is more like a miracle.

There are no showers, restrooms, vanity mirrors or coffee kiosks here, and the owner, Frank Hendricks, isn’t fazed about membership ­contracts. He charges R50 a month to those who have jobs and can afford to pay; for the rest, it’s free.

A traumatic event in the Hendricks’s family life led to him opening his gym in 2008.

Big idea
Hendricks’s son was in his early 20s when he tried to protect a girl from being harassed by a gang called the School Boys. They stabbed him 12 times, leaving him bleeding at the side of the road.

Instead of laying charges, Hendricks consulted his son in hospital.

Sitting next to his son’s hospital bed, Hendricks’s big idea was born: open a gym and provide a safe place for these young gangsters to vent their frustrations.

He managed to get word out to the School Boys’ gang leader that he wanted to see him. Shortly afterwards he saw the gang of 30 coming towards his house.

“People said: ‘Today you are going to die’,” says Hendricks. “And I told them, no, that won’t happen.”

Instead, he asked his wife to bake some cakes for them.

Confidence
Relaxing on his couch, surrounded by the trophies of his life-long bodybuilding and coaching career, Frankie recounts how, after that first rather daunting encounter, he gradually talked the gangsters around.

“I organised a beach braai, and after we had eaten we spoke about life and why the boys ended up hurting others. Many of them cried.”

Gaining their confidence little by little, Hendricks finally got his wish and opened a gym in the back yard of his house. “Don’t worry about the money,” he said to potential members. “Just come.”

Since then, he has sent numerous young men to the Western Province Bodybuilding Championships.

Above the front door of his small green house with the rusted gate he has painted the word FREEDOM. The gym is pumping.

Mark April has impressively toned muscles and braided hair. He is ­usually the last person to leave the gym at night. Two years ago, his desperate mother turned to Hendricks and asked him to help her son, who, by his own description was “messing up my life, smoking drugs”.

At the end of his workday, labouring for a roofing contractor, April arrives at Frankie’s. He recently came third in the Western Province Bodybuilding Championships.

Conditions of parole
When a confident-looking man dressed in the latest gear and sunglasses arrives at the gym, all the other young men who are working out fall silent.

Known as the General, he is said to be a high-ranking member of The Numbers gang. The General signs in at the gym daily as part of his conditions of parole.

“I have known Uncle Frank for many years, and I always respect him,” April tells me. “Keep out of crime and keep out of jail,” he says before getting into his routine. “It’s not the way.”

Hendricks’s dream offers a small hope against a tide of crime in the Helderberg area.

A lucky few have jobs at the Gants pickling plant, but other paid employment is rare. There isn’t much to do in Rusthof and children grow up in the shadow of the gangs, drugs and alcohol abuse.

Not everyone at the gym has a ­violent or drug-related past, and people from all backgrounds mix.

Howard Grieselaar used to be a rugby player. “I was in a bad car accident on the way to my matric dance and I thought I would never be able to use my arm again,” he says. His injured flexor muscle bulges under the weight he’s lifting.  “And … I’m not a naughty boy!”

Self-control
Gym members pack into the small back yard at all times of the day. At first glance, everything looks rusted and roughly put together with bits of foam bulging through split padding. As the men drift in, it is obvious that every piece of what looks like scrap metal works and is utilised to the maximum.

“Nothing gets stolen from my back yard,” says Hendricks . “The people here like our gym too much.”

Black plastic protects the gear, which is open to the elements. he sighs: “If there’s one thing that I want for my gym it’s to build a canopy over the yard. It is just so hot during the summer and when it rains it is impossible to use.”

Most people at the gym seem to have a story of hardship and a desire to change the life offered by the streets, to become someone better. The journey requires self-control and discipline – key skills that are learnt at the gym.

Former convict Neil Bowers isn’t as well built as some of the youngsters there.

At 32, Bowers feels he has lost his youth after 13 years in jail. He finds life beyond the prison walls tough.

Enormous weight
“I am still finding my way outside,” he says. “The people who used to be there for me are not anymore.”

But Frankie’s Gym, he says, has helped him to imagine a brighter future for himself.

“I want to help others now, like Uncle Frankie. Before, I used to run from challenges but now I face my struggles.”

Logan Williams, who sells perfume for a living, towers above most of the group. Sporting a tattoo that says Only God Can Judge Me across his chest, his face contorts with the strain of lifting an enormous weight.

“I started my fitness journey at Chrysalis Academy,” says Willliams. “Coming here keeps me off the streets and away from drugs.”

“I’ve got 80 people working out in the gym now,” says Hendricks. “Sometimes when the equipment breaks I have to use my pension money to fix it. We need better facilities.”

The men cluster around Hendricks as he lifts an enormous weight above his chest. Sweat pours down his face in the midday sun and the guys shout their encouragement and admiration.