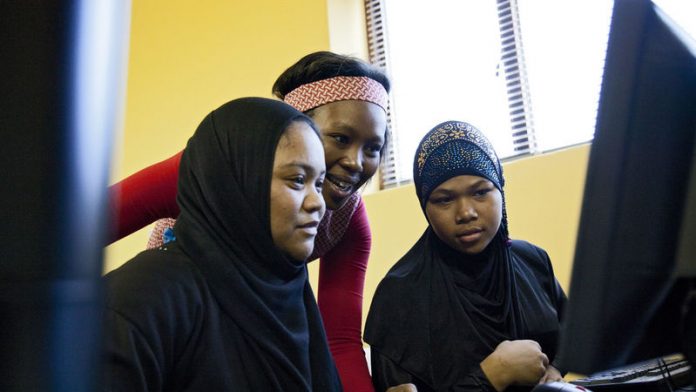 The department of communications donated computers to launch a computer-resource centre in Heideveld, Cape Town, last week. The centre is intended to improve education among Heideveld youth and the community at large. This centre is a project of the Nurul Islam Education Forum (Nief).

The project, aligned with the department’s promotion of information and communications technology (ICT) for socioeconomic development, will fast-track ICT skills development within this resource-poor community. Deputy Minister Stella Ndabeni-Abrahams donated 10 computers and 10 computer tablets on behalf of the department.

She said that society is part of the solution and was proud of the Nief group and other sponsors working to change young people’s lives. The initiative was part of the build-up programme before the department’s budget vote. During last year’s budget vote, the department announced the goal of connecting 1 650 schools. It has since realised that youth who have left schools are excluded.

The department now wants to work with people like those in the customer information system project to build community centres. Ndabeni-Abrahams said that the department was guided by the policies of the ANC, including the right to access to information.

It had to ensure that these policies developed and improved the lives of people, no matter where they lived. She said people did not have to move from their areas to get the benefits of exposure to information technology; they could be accessed anywhere through computer technology and the internet.

Working together we can do more
Ndabeni-Abrahams said that the legacy of apartheid remained evident in the community of Heideveld. “This is why, 19 years into democracy, we are obliged to make a mark that leaves that past where it belongs, but to learn what is useful from that history.”

She acknowledged the sacrifices of those who fought for freedom: “Now that they have done their part, it is our responsibility to create to perfect the work they left us.” She reminded everyone that former president Nelson Mandela believed in education, and worked to gain the information and skills to work toward the freedom of his country.

Ndabeni-Abrahams encouraged the youth to access and make use of the training institution, National Electronic Media Institute of South Africa (Nemisa). She said that Nemisa was for those who wanted to be involved in media, creative arts and broadcasting. She urged young people to understand that computer skills were not simply about typing, but also about accessing information.

“Use the opportunity to connect with others across South Africa and to ensure that Heideveld becomes part of the global world. “Education is the most powerful way in which to change the world,” she said. The deputy minister also warned: “If people stay away from or harm these structures, they deprive themselves of the rights that many fought for. Aim high and ensure that what you do will help others. Working together we can do more.”

Raise the voices of the youth
Ndabeni-Abrahams encouraged the people of Heideveld to consider why South Africa was producing unemployable graduates, and to collaborate with government to ensure that their voices are heard and they become part of the solution.

She said that faith-based organisations have a critical role to play in building communities. “The department of communications encourage all young people to use the opportunities that have been given to them. The youth need to be heard and communicate their needs so that we can work together to build a better society.”

Community involvement
Heideveld is part of ward 44 in Cape Town, which includes Gugulethu and Welcome Estate. The community was formed during apartheid when people were relocated from areas such as District 6 and Constantia. Today it has a very low employment rate and low education levels. Only 20% of adults over 20 years old have a Matric-level education.

The Heideveld Mosque was established in 1967 and is a vibrant part of the community. The passion to communicate, protect and educate the community was evident. Security guards, teachers, school principals, basketball coaches, imams, and visiting dignitaries all expressed their vision of a community where children and families could grow and develop.

Many believe that individuals can contribute toward change and each person has the potential to uplift themselves and their community. This vibrant community stresses the importance of communication to draw a community together and to address social ills. This impoverished community now has the opportunity to develop marketable skills and to interact globally through ICT.

School-drop outs, teenage pregnancy, gangsterism and substance abuse has plagued the community. This, combined with low levels of employment, highlights the need for this type of initiative within South Africa’s poorer communities. Community members who already possess ICT skills will help to run the centre and it will be open to the whole community and not only Muslim people. The collaboration with grass roots organisations helps government to address problems identified by the community, and allows the community to address their issues using self-designed solutions.

By directly working with organisations on the ground, the government can extend its impact and move closer to reaching national policy targets.

Community excitement
Local primary school principal Antony Meuyer said that his school’s computers served over 500 learners. He says that they were installed in the 1990s and are outdated.

“This is really fantastic because some of our community members don’t have access to computers. There are only two computers in the community library,” he said. He said that teachers need to improve their computer literacy and will be encouraged to use the resource centre.

Democratic Alliance ward counsellor Anthony Moses celebrated the computer resource initiative and praised the Nief for making it possible. He said the mosque was a very important part of religious education within the community and was an agent for social change. “These initiatives help community members to become victors instead of victims. It’s an opportunity to take this community to another global level,” he said.

Community member and local basketball coach John Goliath is excited about the access to information that computer resource centre will bring to the children in the community. “It has been a challenge for the kids to get time on the computers,” he said. Heideveld mosque chairperson Anwar Ebrahim said that the computer resource centre would bring education and knowledge to the community, and this would contribute to the fight against drugs, gangsterism, and other social ills. “It may be that one of our future leaders comes from this community because of the resources we are providing here. We want the community to come and make use of the facility and to share ideas around the community needs,” he said.

Farahnaz Stellenboom Maggott, the public relations officer and media liaison for Nief, says Nief is a programme that draws youth to the mosque. They have 150 learners at the mosque’s school. She said that the mosque was busy from 6am until about 10pm at night and provided a safe space for people to use the computers. “The centre will help youth and adults learn the basics of computing and help children and youth with projects and research for school.”

A spokesperson for IT Masters, who provided installation and internet connections, said that it had been good to work with a department that was involved and understood the importance of sharing information. “It’s been heart warming to work alongside people with such commitment. Who’s to know that the next Mark Shuttleworth can’t come from Heideveld?” he said.

Nief project background
The Nief was initiated by local imam Toya Hendricks and comprises teachers with a passion for building communication skills and promoting ongoing learning. The forum is affiliated with the Heideveld madrasa and cultural society and works toward creating educationally rich activities to promote greater social cohesion and a culture of learning.

Nief community resource centre co-ordinator Sharief Starke is passionate about the role of computer technology in people’s lives. He explained that the centre will teach students Microsoft Certified Digital Literacy. After this, they will be able to use the tablets and computers to research school projects, draw up CVs and search for or promote employment opportunities. Starke hopes to train community members to teach the IT curriculum at the mosque.

“The centre, although based at a mosque, is open to everyone. The idea is that community members and youth will be taught how to do things for themselves. The training will be focused on job skilling and providing employment opportunities,” he said.

Initially the forum applied for any help in financing 17 computers for the centre, but the ministry has helped to extend that vision through presenting the forum with 20 computers.

Policymakers and pundits, however, must ensure novel solutions do not exacerbate the inequalities of the South African education system
Read more
Advertisting
Continue to the category
Coronavirus