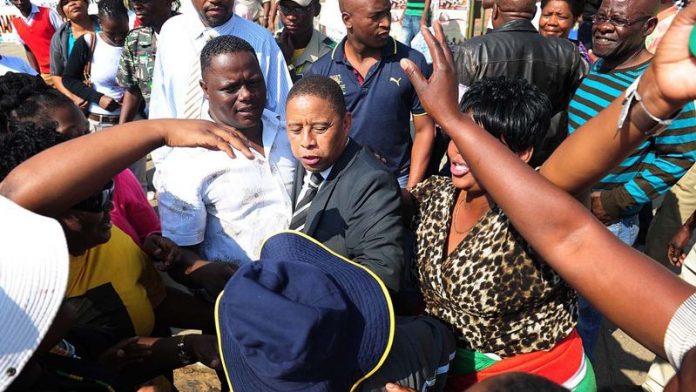 Wolmarans was released on bail after calling into question the way the state convicted him and his mayoral bodyguard Enoch Matshaba for the murder of Rustenburg councillor Moss Phakoe.

The two were last year convicted of killing Phakoe, but were released on May 10 after successfully challenging their conviction at the Supreme Court of Appeal.

The supreme court ordered the North West High Court to grant the two leave to appeal in January after the trial judge, Ronnie Hendricks, had refused to allow the appeal shortly after he convicted them in July last year.

Phakoe was shot dead outside his home in 2009.

When granting R100 000 bail to each of the applicants on May 10, Hendricks agreed that the court could come to a different conclusion after hearing the appeal.

"It was brought to the attention of this court that one of the state witnesses during the trial, Emmanuel Masoka, recanted his original statement and viva voce evidence tendered during the trial," said Hendricks.

"This court cannot exclude the possibility that in the event further evidence is presented on appeal before the full bench of this division, this may well have a bearing on the outcome of the appeal."

Hendricks concluded that: "In the event of being successful on appeal it would render the further detention of the applicants pending their appeal unjust and unfair."

In an affidavit that will now become part of the presentation of new evidence, Masoka claimed he was made to lie to the court when he said Wolmarans confessed to him in the police cell they shared.

Police offered him freedom and money in exchange for this evidence, he said.

"I lied in the statement I made to the police and court," Masoka said in an affidavit dated January this year and filed in Rustenburg.

Masoka claimed Wolmarans paid the killers R30 000 and then after the job was done he paid them R80 000.

Wolmarans said in his affidavit: "I was convicted on the single evidence of a confession allegedly made to a criminal in suspicious circumstances. Emmanuel Masoka was, contrary to the usual practice, not detained in prison but at the police station and under a false reference number."

Masoka's case of theft was withdrawn and he was released two weeks after testifying against Wolmarans. He has now joined an application for Wolmarans and Matshaba to appeal the whole conviction.

Wolmarans and Matshaba will put it to the court that their conviction is faulty because:

The case will be heard before a full bench of the North West High Court in Mmabatho on June 7.

Rustenburg mayor: I was framed for murder of councillor

Wealthy countries were quick to ban Southern African nations from entering their borders when the Omicron variant was identified, but did not do so to each other.
Advertising