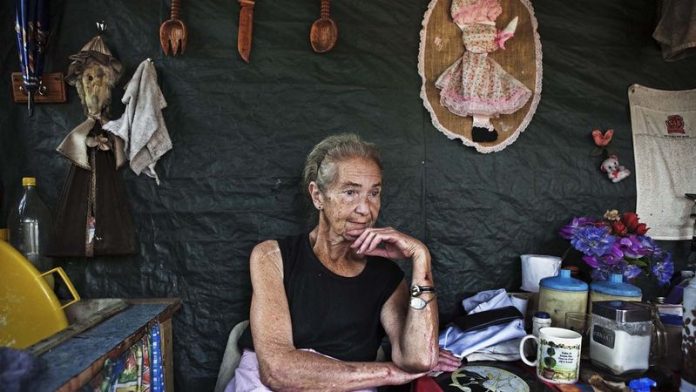 "Stupid people shouldn't breed," shouts a sun-glassed man through the open window of his white BMW. The heavy-set woman doesn't blink. She's standing near the robot in the burning sun, holding a cardboard sign: "Four ­children, no work, all gifts welcome, God bless."

You see them at robots, at stop streets, in parking lots. Weathered looks and blank faces, often pawns of dodgy entrepreneurs who bring and fetch them in exchange for a fixed sum. Some beg, others sell newspapers or act as car guards. Most of them are Afrikaans-speaking.

These are the armblankes (poor whites). According to Helpende Hand (Helping Hand), one of the many legs of the union Solidariteit, this is only the tip of the iceberg. Helpende Hand says that these people have been neglected by a "racially biased" government. "It's probably the only kind of poverty in the world that is ignored because of politically correct reasons," writes the organisation in a brochure that blames forced retrenchments and affirmative action for the emerging white poverty.

Helpende Hand estimates that 10% of white South Africans now live on a monthly family income of less than R3 000, and two-thirds of them are Afrikaners.

Are these the rejects of the new South Africa? Victims of racial politics? Or are they just downright lazy?

Pretoria North has endless roads that take you past car dealers, pawn shops, scrap yards, sex shops and fast-food outlets. Behind this façade of cheap thrills you'll find the new Afrikaans poverty. It's a subculture with its own argot: outies (vagabonds) roam from town to town, where they byt (suck up to people like ticks) or zula (beg). The white squatter camps tend to have optimistic names: Sonheuwel (Sun Hill), Sonskynhoekie (Sunshine Corner) and Bethlehem.

Bethlehem gained national fame after two visits by President Jacob Zuma. Like most of the white squatter camps, it's invisible from the road, as if ashamed. A large residential house and a big sign that says "To God the Glory" hide the few dozen wooden huts that have been erected here since 1995 around a big vegetable garden. Bethlehem is more organised than Sonskynhoekie and less daunting than Sonheuwel.

Not the government's fault
When I visited Bethlehem it gave shelter to 17 men and 15 women. The youngest was 15, the oldest 80. A woman in her early 40s introduced herself as "Carissa Nel, co-ordinator". She spoke about her lost years after her husband and children died in a car crash and how she eventually found refuge in Bethlehem. It was she who invited Zuma, she claims.

"I told him he must come and see with his own eyes, instead of doing all these foreign trips. He ate from that pan there," she points at a big black metal saucepan. "I told him: you must serve yourself. He promised us food, transport and electricity."

Years later, and they are still waiting. But unlike Helpende Hand, the people of Bethlehem don't blame the ANC for their ordeal. "Let's be clear," says Nel. "It's not the government's fault that we are here. It's not God's fault. And it's not our parents' fault. It's our own fault."

The armblankes phenomenon is not new. It dates back to the devastating Anglo-Boer War (1899-1902) that pushed thousands of semi-literate and traumatised Afrikaners from the platteland to the cities. In 1890 there were fewer than 10 000 urban Afrikaners; by 1926 their number had grown to 391000. Six years later about a quarter were labelled as "very poor". Led by the Nederduitse Gereformeerde (NG) Kerk, a number of Afrikaner organisations started looking after their own. The concept of helpmekaar (help one another) was partly fuelled by charity and partly by fear that whites would "sink" to the level of poor black people.

Once the apartheid government got into power in 1948, they found "their people" employment in the railways, in the factories and as unskilled civil servants. A small minority missed the boat. They were seen as an anomaly, lost cases – single mothers, the elderly, alcoholics, drug addicts and people with serious physical and mental problems. White trash.

But with the end of apartheid came the end of race-exclusive care and job protection, which had kept the poor whites separated from the poor blacks. Since then, their numbers have started to grow, turning working-class Pretoria neighbourhoods into poor Afrikaner ghettoes.

At first sight Danville doesn't look too bad. But, once again, the shame is hidden. Social worker Marlie van Vuuren takes me to a nondescript house in Knight Street. In the back garden stand six huts, two caravans and a service quarter – all of them rented out to poor whites.

Signs of hope
A woman who introduces herself as Cecilia lies on her bed in a boiling hot, asbestos-roofed hut. It smells of cabbage, sweat and urine. The rent is R800 a month. Cecilia is holding a one-year-old baby, her eighth child. The other seven have been taken from her by welfare. This one she'll keep, she promises.

A few streets up is a multistorey facebrick building, nicknamed Die Kamers (The Rooms). What once were offices are now one-room apartments, often housing whole families, about 80 in total, black and white. Rent varies between R1200 and R2 000 a month. "If you live here, your status is slightly higher than in a squatter camp," says Van Vuuren, referring to nearby schools and opportunities for zula.

The mentality here is also slightly different. Here they don't blame themselves for their misfortune. "It's [FW] de Klerk. He gave everything to the blacks. Now the blacks are boss," says inhabitant/supervisor Hannetjie Venter (46), whose dad worked for the railways and managed to have 17 offspring.

Van Vuuren works with the children in Die Kamers. They get free nappies and milk. But to qualify  the mothers must attend food and hygiene classes at least twice a week. "Some have already stopped coming. They stay in their rooms. It's too much of an effort for them to come to the communal room," says Van Vuuren. She calls it "the cycle of ­getting up, boredom, depression".

"With blacks I see signs of hope," she says. "For them Die Kamers is a step up. Whites are much more negative and often don't see a way out."

In the 1920s it was the church that spearheaded the helpmekaar initiative. In neighbouring Booysens, the spire of the NG Kerk still rises above the small houses. Dominee George Nel loves a good old Calvinistic ­slogan: "The Lord has created us to get our hands dirty." But putting this credo into practice has been another story. When he came to Booysens in 1995, Nel found a dawdling congregation of a few hundred souls.

Many people in Booysens used to work for steel company Iscor and were retrenched with a severance pay of about R300 000. Nice sum, they thought. But no one told them how to deal with money. Some started their own business, which didn't last. Others gambled their fortune away in the nearby Morula Sun Casino. And a third group was conned by charlatans who promised 20% interest.

Despondency
From workers they turned into survivors. "Employment" became something from the good old apartheid days. Despondency rules.

"I preach about hope, because they tend to lose hope," says Nel, who saw his community grow to about 1 000 registered members. "Blacks know much more of that community feeling. We have been brought up as individualists. The idea of helpmekaar has all but disappeared."

Nel stares out of the window. "I find them a job, but after a couple of days they have already left it. That's in their culture. And I'm at a loss how you can change that."

Someone knocks on his door. It's Piet Potgieter, a proto-outie: leathery face, ageless. Dad worked for the railways. Ma committed suicide. Marriage in ruins. Booze. Laid off. Potgieter sleeps rough and earns some money selling scrap. On Fridays he comes to church to clean, in exchange for food and washing powder. Wouldn't he want a proper job? "They'd rather take the black," says Potgieter. "They're cheaper and more reliable."

Nel lifts Potgieter's pale red T-shirt and slaps him on the stomach. "Look, not an inch of fat. This man can work."

A controversial BBC report this week on white South Africans has been condemned by the ANC and the Democratic Alliance for being incongruent with the reality in the country.

The report by the BBC's world affairs editor, John Simpson, which appears as both a video and a written article on the broadcaster's website, claims only ­certain white South Africans have a future in the country.

"The people who are suffering now are the weakest and most vulnerable members of the white community," it reads. "In the old days, the apartheid system looked after whites and did very little for anyone else. Nowadays, white people here are on their own."

ANC spokesperson Keith Khoza said: "South Africa has never been in a situation where whites have been singled out and persecuted. Instances of crime and poverty affect all South Africans regardless of skin colour."

The DA, too, was displeased with the article: "Poverty is endemic in this country and we have poor people – not poor whites and poor blacks."

Anton Harber, Wits' Caxton professor of journalism, said he was "appalled that a seasoned journalist like Simpson should produce such a half-assed, skewed view of reality. He appears to have fallen victim to the voice of a few paranoids, a narrow interest group who see things through a crude racial ­perspective." – Nickolaus Bauer