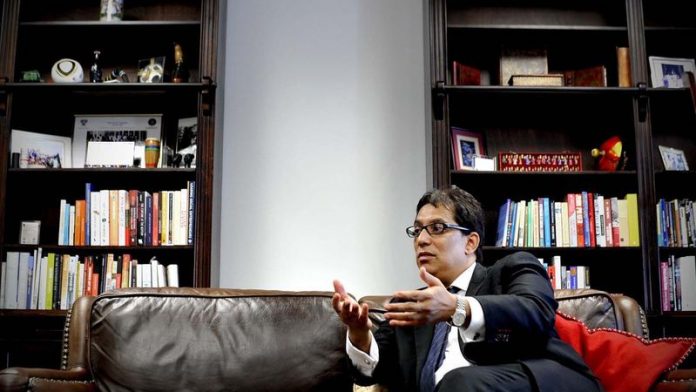 The consortium due to buy South Africa's biggest newspaper group has come out fighting, blaming rising desperation among competitors for questions around its shareholding and intentions.

Irish shareholders are due to decide the fate of the local Independent Group in a little less than a month, a decision that will bring major changes to daily media in the country, one way or another.

Although many questions will remain unanswered until then, it emerged this week that a quarter of the group may soon be owned by a government pension fund, and that three men closely aligned with the government and the ANC will be in charge of the new owners.

The ANC has long argued that although voters show it has overwhelming support among the public, the media landscape does not reflect a similar distribution. The party has also long considered launching its own media presence, with several similar projects considered (and mostly discarded) by the government.

There has also been considerable controversy in the funding of the New Age, a newspaper owned by the Gupta family that is closely aligned with the family of President Jacob Zuma, and which attracts a great deal of government advertising, and sponsorship from government-owned companies.

The Independent Group in Ireland this week called an extraordinary meeting on June 17, at which shareholders are expected to vote in favour of a corporate restructuring to include the sale, for R2-billion in cash, of its assets in South Africa. Those include the Star, Isolezwe, the Cape Argus, the Cape Times, the Daily Voice, local newspapers in Pretoria and Kimberley and various weekend newspapers.

Sekunjalo Independent Media Consortium, the local buyer of the business, has refused to disclose details of its shareholding until after the June vote, and though the acquisition is currently before the Competition Commission, shareholder details are contained in a confidential part of the paperwork.

"You are going to like our consortium," Survé said. "We have three trade union investment companies, we have community groupings, equity for employees. We have people from very different political persuasions, independent-minded individuals. It is very diverse."

Survé also dismissed reports that a government pension fund was putting up R500-million, a quarter of the purchase price, in return for a 25% stake, but would not provide accurate numbers.

"We are bound by confidentiality until we can make a joint announcement after the [Irish shareholder vote]," he said. On the 18th [of June] we will be happy to announce all the details: the editorial policy, the editorial advisory board, the shareholding, everything."

Sekunjalo has committed to creating an editorial advisory board populated by "a group of elders" to guide the newspapers, and ensure tough but fair coverage – with a touch of the positive.

"The one objective I have is nation-building," Survé said. "We want to create an opportunity to use Independent to tell stories, to do quality journalism, to be critical where we need to be, but also to keep in mind that we have a nation to build."

Survé confirmed that businessperson Sandile Zungu and ANC MP Mandla Mandela are involved in the acquisition, but would not disclose details of their holding or anticipated positions. "Number one, the sellers will sue me," he said.

Defeat
Zungu is considered to be closely aligned with the ANC and the government, with political connections similar to those of Survé, though not drawn from the same struggle history. Those political connections have helped to fuel speculation about the role the Public Investment Corporation (PIC), which manages government pension money, is playing in the acquisition.

In December 2012, the Mail & Guardian saw correspondence from lawyers acting on behalf of Groovin Nchabeleng, a losing bidder for the Independent acquisition, which alleged that an about-turn by the PIC had contributed to that consortium's defeat at the hands of Sekunjalo.

According to Nchabeleng's group, the PIC said in July that it was concerned about perceptions that it favoured any of the several bidders in the process, and would maintain neutrality. But in late November it suddenly withdrew its support for competing bids, in effect torpedoing the chances of those contesting the transaction with Sekunjalo.

In response to questions, the PIC said it had decided to support a single bidder (later confirmed to be Sekunjalo), in the normal course of its business, based on considerations such as commercial viability and required returns "as expected and obligated by its clients' mandates".

At the time of the dispute with PIC, Nchabeleng refused to speak to the M&G. This week it was clear he still wants a seat on the train. He told the M&G: "We might be working with Iqbal. We are passionate about media. One way or another we will find a way of working with Iqbal."

Survé said Nchabeleng had assured him that he considers Sekunjalo to have won the bid fair and square.

"Quite frankly, I'm tired of all the speculation and the rubbish," Survé said, laying the blame for swirling rumour and speculation squarely on other publications. "Don't pretend if you are a competitor that you do not have an agenda to put a competitor out of business, and tarnish them before they even get out of the starting blocks … Other media will find a formidable competitor in Sekunjalo, and they know it." – Additional reporting by Sam Sole

The government's chums at Sekunjalo

Three names have been linked to the consortium intent on buying the Independent Group. All three are closely aligned with the government and the ANC.

Sandile Zungu
Zungu also serves on the Brics business board and has acted as the chairperson of state arms company Denel. He has been a fundraiser for both the ANC and Jacob Zuma, and is believed to have made a play for a post within the presidency. He has acted as an adviser to Zuma on empowerment issues, and serves as a trustee of Brand SA, appointments to which are made by Zuma.

Mandla Mandela
Best known as the grandson of Nelson Mandela and for occasional controversies in his private life, Mandela is an ANC MP as well as a traditional chief.