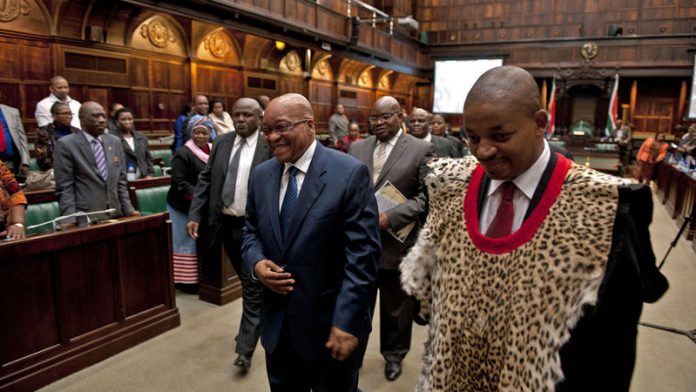 A seemingly relaxed President Jacob Zuma  addressed the National House of Traditional Leaders in Parliament on Thursday, a day after a heated debate in the National Assembly about the landing of a plane carrying Gupta wedding guests at the Waterkloof Air Force Base.

Zuma stayed away from the debate on Wednesday, where he was accused by opposition MPs of being the root cause of the Waterkloof saga.

He used his address on Thursday to criticise wildcat strikes, particularly in the mining industry, warning that they had the potential to wreck the South African economy and impoverish the country.

"I'm saying our economy, which is resilient, is facing that kind of a challenge," he said. "The tension in the industry will not help the economy of the country. I'm stressing the point because, as leaders, there are some responsibilities we could undertake; we could impoverish our country without realising it."

He said he was not opposed to workers' right to strike, but the issue was how it was done. "Do we do it to make others lose their jobs or so that others could get jobs?"

Zuma said wildcat strikes were hardly the way to advance the interests of marginalised sections of the people in a democratic dispensation.

"We should demand better salaries and working conditions, but we may not wreck the economy," he said.

Zuma said union leadership needed to draw the line between anarchy and constructive engagement. "If the workers demand higher wages and that becomes a point so sharp of conflict that it could produce a Marikana, then there's something wrong in our society."

Zuma said he spoke as a former trade unionist, during whose time people didn't "wake up angry and call a strike".

Zuma also applauded traditional leaders for a "measured debate", saying members of Parliament needed to learn from them.

Most traditional leaders were highly positive about the government.

"I've listened closely to the deliberations of the house and I am uplifted by what our leaders have said here," Zuma said. "Something is different about the debate in this house. The discussion of serious issues facing the nation is free from party-political grandstanding and instead is characterised by mutual respect.

"It's a lesson we all need to learn from, that we cannot promote politics above the nation and our people and think that politicking in oppositional kind of politics is helpful."