Palestine: Love and lentils in the holy land 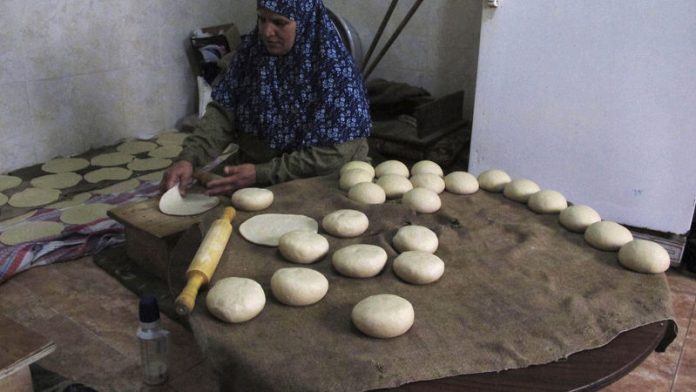 In a kitchen in the “martyrs’ quarter” of the Aida refugee camp in Bethlehem, one of the toughest places in the West Bank, Islam Abu Aouda is preparing a soft dough of yoghurt, oil and flour. Soon she will fill small pockets with chopped spinach, sumac and lemon, and bake them in the oven. The mouthwatering parcels are called krass; I ate four but I wanted 14.

Less than 50 miles away, Reem Daloul is also kneading dough in a makeshift kitchen in Gaza City, lit only by a small window during one of the coastal enclave’s regular eight-hour power cuts.

This dough is for small cigar- and horseshoe-shaped pastries, filled with za’atar — a blend of herbs, seeds and spices — or soft, salty cheese mixed with hot chilli.

These two Palestinian women are divided by walls, fences and checkpoints, but are connected by a love of traditional food — and the will to use this to improve their circumstances.

Islam, whose six children include a 13-year-old disabled son, is part of a small collective of women, nearly all mothers of disabled children, who offer cookery classes and homestays in the Aida camp; Reem is part of the Zeitun Kitchen women’s co-operative, which caters for weddings and family parties in Gaza.

The tastes and aromas of traditional Palestinian food are at the heart of every home, where vividly flavoured dishes are created from scratch using the freshest ingredients, herbs, spices and olive oil.

For foreigners, it’s not easy to find this food: restaurants and street stalls concentrate on the staples of grilled meat, salads, falafel and hummus; real Palestinian cuisine is found at home.

The restaurants and street stalls are the domain of men. The two spheres do not overlap.

Old favourites
Among the most common home-cooked dishes are maqluba, meat and vegetables cooked in a spicy broth, served with nuts, herbs and yoghurt; baba ghanoush or moutabal, a dip of roasted aubergine, garlic, lemon and tahini; mujaddara, rice and lentils topped with caramelised onions; and musakhan, chicken roasted with sumac and served with sweet onions on taboon bread.

These dishes are to be found in an enticing new cookbook, The Gaza Kitchen, which combines recipes with stories from Gaza and the political context of the residents’ hardships.

One of its two authors, Laila el-Haddad, a Palestinian-American, who spent her childhood summers in Gaza, says: “Food was always a way for me to stay connected to my heritage and Palestinian identity.

“Even in such a small place there is remarkable regional distinction, which generation after generation holds on to with great pride. In general, it’s spicy, piquant, herby, sour and very earthy, relying on fresh herbs, green dill, dill seeds and a love for all things sour — sour plums or pomegranates, or lemon juice — and hot.”

The women of the Aida refugee camp have also produced a small booklet of their recipes, called Zaaki, in collaboration with the Noor Women Empowerment Group, a tiny Bethlehem-based grassroots project.

Supportive network
While chopping tomatoes and cucumbers into tiny chunks for a traditional Arabic salad and roasting whole aubergines over a naked flame, Islam says that the cookery project stemmed from a need to raise money for consumables and equipment for the women’s disabled children.

But the first task was to get the women together in a supportive network.

“Sometimes, families hide their children in the house because they are ashamed,” she says.

Some disabled children never go to school. The cookery classes allowed the mothers to make a small income without abandoning their domestic responsibilities.

At first the women, brought up in a tradition of Palestinian hospitality, recoiled from charging strangers to eat their food. And their husbands were initially reluctant for men to be admitted to the classes.

“At the beginning, everything was really difficult,” says Islam, scraping the smoky aubergine flesh into a bowl with lemon juice, garlic, tahini and salt.

“There was a lot of gossiping about the project in the camp, with foreigners coming to our home, but now people are supportive.”

Islam is learning English so she can deal with foreign visitors without the need for translation.

Her husband is unemployed, like most of the men in the camp, where many families depend on food aid.

Despite the traditions and skills of home cooking, Aida children suffer from high rates of calcium deficiency, anaemia and tooth decay.

Daily hardship
In Gaza, almost one million people — more than half the population — receive basic food assistance from the United Nations. The 13 women of the Zeitun Kitchen co-operative have learned to adapt to the privations of life in Gaza.

On the day I visited the Zeitun Kitchen, there was no power. “We used to have a generator, but it broke. The power goes off every other day for up to eight hours. We make everything fresh so we don’t depend on fridges,” says Jamila Daloul, who founded the Zeitun Kitchen eight years ago.

The dish in preparation at the start of our visit was maftoul, the Palestinian version of couscous. A dough of flour, salt and water is pressed over a flat sieve to create fine grains, which are then steamed with chopped onions, peppers, dill and lemon. Maftoul is traditionally served with a meat and vegetable stew.

The women gossip and laugh as they cook, and occasionally disagree over technique. But all is forgiven over an early lunch washed down with thick Arabic coffee or sweet mint tea.

Food is more than a mere necessity; it nurtures, and binds people to each other and their cultural identity.

In their introduction to The Gaza Kitchen, Laila el-Haddad and her co-author Maggie Schmitt say they conceived the cookbook as a way of allowing them “to tell the story of the place in a very special way. Nearly everyone in Gaza to whom we explained the project understood it immediately: to talk about food and cooking is to talk about the dignity of daily life, about history and heritage in a place where these very things have often been disparaged or actively erased.

“Approached for an interview, Gazans braced themselves to explain one more time — gently, patiently —the impossible political situation of the Strip. When they discovered we did not want to talk about political parties or border crossings but about lentil dishes, there was a moment of astonished delight before they launched into the topic.

“Passers-by crowded around, each proffering a hometown recipe: ‘No, no, it’s much better if you add the onions at the end …’ Food is a passionate subject.” — © Guardian News & Media 2013

Q&A Sessions: ‘Food is central to every occasion’