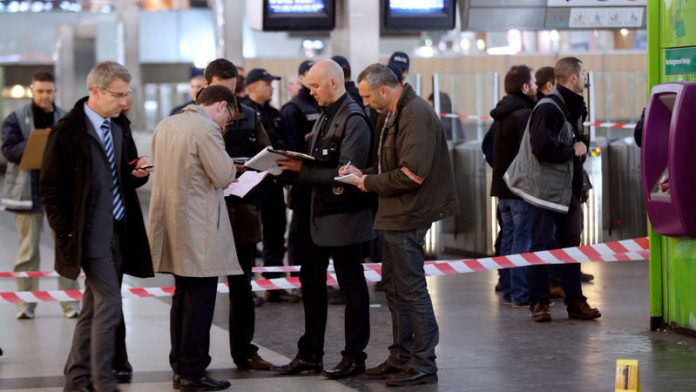 Police are hunting for a bearded man about 30-years-old and possibly of North African origin who fled into a crowded train station after attacking the 23-year-old soldier from behind with a knife or a box cutter on Saturday.

Interior Minister Manuel Valls tasked a Paris anti-terror unit with the investigation. He said on Saturday night that the attack's spontaneous nature recalled the daytime murder of a British soldier on May 22 by two men shouting Islamist slogans.

"I think this person wanted to imitate what happened in London," he told Itele television, echoing France's defence minister who said earlier that the soldier had been targeted because of his uniform.

But Valls warned against jumping to conclusions about an Islamist militant attack because police had yet to arrest a suspect or gather enough evidence to offer any theories about its motivation.

Military intervention
A police source told Reuters the attacker fled without a word after striking the soldier, who was patrolling the La Defense business neighbourhood west of Paris with two other servicemen when he was stabbed in the back of the neck.

The assailant struck at least once and narrowly missed the soldier's jugular vein. On Sunday the soldier was recovering at a military hospital near Paris, French media said.

Police originally described the attacker as tall, athletic, dark-skinned and wearing an Arab-style tunic under his jacket. But the source said police now had doubts about the tunic after reviewing surveillance footage, saying it could be a sweater instead.

An individual was questioned late on Saturday following the attack but subsequently released because his description did not match that of the assailant, the source said.

France has been on high alert for attacks by Islamist militants since its military intervention against Islamist rebels in Mali in January. That prompted threats against French interests from AQIM, the North African wing of al Qaeda.

The latest warning was published on YouTube a few weeks before gunmen this week attacked a military base and a French uranium extraction site in the central African state of Niger, killing 24 soldiers and one civilian. – Reuters