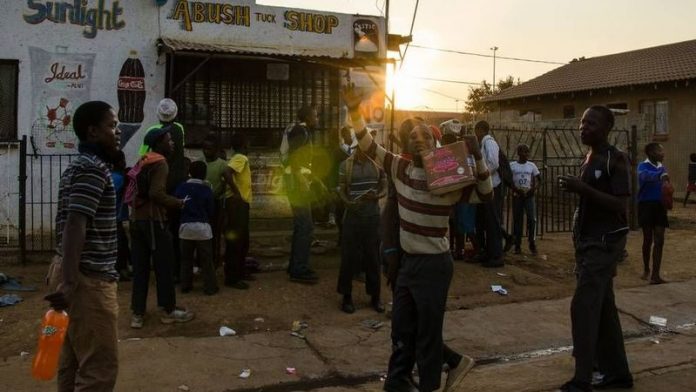 Orange Farm, south of Johannesburg, and the neighbouring Sebokeng informal settlement, are brimming with tension following so-called xenophobic attacks on foreign shop owners on Friday but the attacks are inseparable from a plethora of issues stalking these communities.

Chief among these is the competition for scarce resources, such as RDP houses and customers for informal traders, who must rely on a largely unemployed community for income.

On Friday, the recently launched Workers and Socialist Party (Wasp) organised a protest in Orange Farm against proposed evictions for illegal RDP owners. The protest related to attempts by local community members to occupy newly-built RDP houses which they claim have been sold – illegally. Wasp alleges that those who have moved in have been threatened with eviction, and wants the allocation of RDP houses to start afresh.

The looting and pillaging that followed at the foreign-owned shops was unrelated to Wasp's activity. But the driving out of foreign shop owners in the area overshadowed that protest by far.

The events were almost identical to those of February 2010 when school children were involved in the looting of foreign-owned shops in Orange Farm, dwarfing another service delivery protest.

This time around, the unrelated protest was organised by Wasp, which denies having anything to do with the looting. But the party does recognise that Orange Farm is a community competing for scarce resources, and in 2010 – as in 2013 – it was in places such as Orange Farm where xenophobia was left untreated and to fester.

Looting
Gauteng police spokesperson Lieutenant Colonel Lungelo Dlamini said the events began on Monday with a service delivery protest outside Sebokeng, a settlement that falls just short of the Gauteng border. Roads were blocked and the protest quickly spread to neighbouring Evaton and Orange Farm, about 20 minutes away.

Police suspect the roads were blocked in an attempt to prevent officers from accessing the areas where the looting took place.

By Thursday, the police advised foreigners in the area to leave and even helped some of them to pack up their shops and homes. (They have not returned to the area.)

Police also received information that schools would be closed on Friday so that children could participate in the protest.

That afternoon, shops in Sebokeng were looted and their foreign owners were run out of town. The looting soon crossed the Gauteng border and spread to Orange Farm where over 100 people were arrested. They will appear in court this week.

The incident had headlines screaming comparisons to the 2008 xenophobic violence, which left over 60 people dead and thousands displaced.

Xenophobic tone
Despite Friday's events taking on a blatantly xenophobic tone, Gauteng police cannot call them as such. One reason for this is that the shop owners were not physically attacked – they were merely chased away. Another is that the police simply don't know enough.

Dlamini said a local councillor met with looters on Friday evening to gauge the reasons behind the looting but the outcome was not relayed to the police – and the police did not inquire about it.

It was widely reported that the looting was inspired by the death of a Sebokeng resident, allegedly at the hands of a Pakistani national.

Dlamini said the police had no intelligence to this effect. There were no recent murders in the area, he said, and no Pakistanis recently became murder suspects.

Young people still lingering in the streets after the looters were arrested were unwilling to talk to the media, save to say that all Pakistanis were "rotten potatoes".

And then one young man let slip that, throughout the day, a rumour spread that the looting was instigated by a local shop owner who was unable to compete with the foreign shops' lower prices. At least, these were the speculations of a few teenagers, who stole the remaining merchandise inside the shops after the looting stopped.

Forced removals
The competition – for customers and the resources they spend on these informal traders' wares – extends to the competition for houses.

Sebokeng and Orange Farm were born out of apartheid's attempts to create settlements for the victims of its forced removals policies. Many residents remain homeless and allegations have surfaced that they are being forced to pay for RDP houses by corrupted local officials.

About two weeks ago, reports emerged that residents, frustrated by this, broke the locks of newly-built RDP houses and moved in.

Democratic Alliance leader Helen Zille visited Orange Farm that day. She proposed her party's own solutions to the area's multitude of problems: chief among them was the promise that the party would implement the youth wage subsidy if elected in 2014.

The City of Johannesburg said progress was made at Orange Farm and Sebokeng, with an ICT hub and a mall established at both settlements. Houses have been built but hundreds of people still live in shacks, their names gathering dust on RDP waiting lists.

With jobs in the Johannesburg city centre more than 40km away, informal entrepreneurs thrive while others are left to look for work on the surrounding farms or in the mines.

Dlamini said the police are treating Friday's incident as criminal for now and they were not working with other governmental bodies to deal with the underlying causes. The only inter-state intervention taking place at the moment is an attempt by the police to assist a local councillor in arranging a place for the foreigners to stay at a local community hall.

Evidence of danger
The shop owners spent Friday night sleeping outside the local police station; broken windows in their ransacked shops were evidence of the danger they faced earlier that day.

For Wasp, the situation is not directly linked to the 2008 violence. But the recipe for xenophobic attacks is certainly there.

Wasp spokesperson Mamatlwe Sebei said that although the incident last week should not be seen as xenophobia, the current housing dilemma in the area would continue to create the right conditions for xenophobia to breed.

"Some of these RDP houses are owned by foreigners while some locals have been on the waiting list for years. It's a policy that Wasp opposes because we need to fight against all xenophobic tendencies in the working class," Sebei said.

At Orange Farm on Friday morning, the party joined in a protest around mooted plans for the eviction of residents who occupied RDP houses. Residents said government built around 1 000 RDP houses but that many of these were illegally sold to those who could afford to buy them and that their rightful owners were prevented from moving in.

About 200 of these houses are apparently illegally occupied. Residents have refused to vacate the houses unless the process is started afresh and the houses are transparently and fairly allocated.

Sebei said: "The government is doing nothing about the fact that those houses have been sold by the officials at the City of Johannesburg. All we hear is the typical political rhetoric, that the law must take its course – which basically means inaction on government's part."

Scarce resources
Sebei said the competition for scarce resources contributes to a climate where the have-nots are suspicious of the haves – especially when the latter are foreigners.

"When people are desperate and surrounded by crushing poverty and when they are told there are only a few houses for so many – only a few jobs – there is scarcity of resources created by capitalism and the liberal programmes of the government. Under these conditions, people are willing to believe lies spread about their 'competitors'– in this case, foreign nationals working in the area," he said.

For Sebei, community struggle is an essential pillar of the resistance to capitalism. Wasp wants a unified working class and says the labour unrest in 2012 actually showed that this was possible.

"Think about what happened in the mines in 2012: there are hundreds of foreign workers underground but we did not see xenophobic attacks there. It's an example of solidarity of the working class in the best traditions of the struggle against apartheid," he said.

The City of Johannesburg responded late on Sunday night.

Member of the City of Johannesburg's mayoral committee on health and social development, Nonceba Molwele said the city condemned the looting and cautioned against labelling the attacks as xenophobic.

"Our initial analysis with Orange Farm residents disagrees with this perception. Communities largely blamed youth which acted in a 'not so cool' delinquent way. More hard work must be done to root out ignorance and all other forms of discrimination against fellow residents at Orange Farm and in general, citywide," he said.

Read the City's full response to the M&G here.

A previous version of this article may have led to the assumption that the Wasp protest lead to looting. This is in fact incorrect.