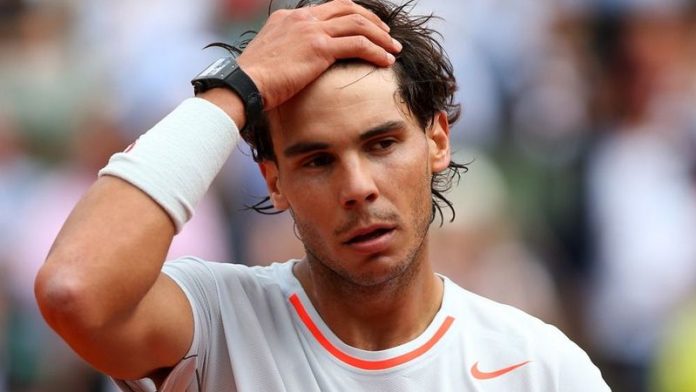 Daniel Brands ensured it was no regular Monday at the office for Rafael Nadal when the Spaniard came desperately close to being shown the door after walking on to Chatrier Court to begin his hunt for an eighth French Open title.

Nadal reached the second round but his 4-6 7-6 6-4 6-3 win over the inspired German, who had never won a main-draw match at Roland Garros before, was fraught with danger as the 11-times major winner flirted with the unthinkable.

Nadal has suffered only one defeat in his 53 previous matches at the French Open and was in red hot form leading into the tournament where the 26-year-old has the chance to become the first man in history to win the same Grand Slam eight times.

Five titles on clay since returning to the tour after a seven-month injury layoff and Brands' terrible record at Roland Garros should have made the first meeting between the two players a formality.

However, things got complicated for the former world number one as his first grand slam match since last year's shock second-round Wimbledon defeat by Czech Lukas Rosol threatened to turn into a nightmare for the Spaniard.

That he survived the onslaught that Brands sent down spoke volumes for Nadal's indomitable spirit, although he admitted he had been made to suffer.

"Sometimes you feel you are not hitting a bad shot and every time a bomb and a winner comes back, that's frustrating," Nadal told reporters. "But I found the solution at the right time."

"He played his game right up to the hilt, all the balls, he was just firing on all cylinders."

Forehand missile
Looking tentative and struggling to cope with the punishing, flat-hitting of 59th-ranked Brands, Nadal double-faulted on a break point at 4-4 in the first set and the German seized his chance, claiming the first set with a forehand missile.

It was the first time Nadal had dropped the first set of a first-round match at Roland Garros and only the fifteenth time he had surrendered at the home of French tennis.

Ominously though, for the Spaniard it was the first time he had lost the first set in a match at Roland Garros since being blown off court by Robin Soderling in the fourth round in 2009.

Brands continued to show scant regard for Nadal's reputation and a repeat of his Soderling loss looked possible especially when Brands held off break points at the start of the second set and dragged Nadal into a tense tiebreak.

With the capacity crowd trying to absorb what they were witnessing, Brands fired down two huge winners to take a 3-0 lead and the alarm bells were ringing loudly in the Nadal camp.

Brands then wastefully sliced a backhand into the net at 3-2 and Nadal sensed his chance, racing through the rest of the tiebreak and roared with relief as much as joy after dispatching a screaming backhand pass on set point.

Nadal said winning the tiebreak was "like oxygen" and after breaking the mighty Brands' serve for the first time in the opening game of the third set, he remained on top although his form will offer hope to those trying to knock him off his perch.

Other results
In the women’s competition, former champion Li Na began with a grafting 6-3 6-4 first-round win over Spain's Anabel Medina Garrigues while home fans dreaming of a first French men's champion here since 1983 roared their approval as Jo-Wilfried Tsonga turned on the style, only to be overshadowed by Monfils' later exploits.

Women's defending champion Maria Sharapova's only concern was a late court switch, though, as the Russian completed a business like 6-2 6-1 victory over Taiwan's Hsieh Su-Wei.