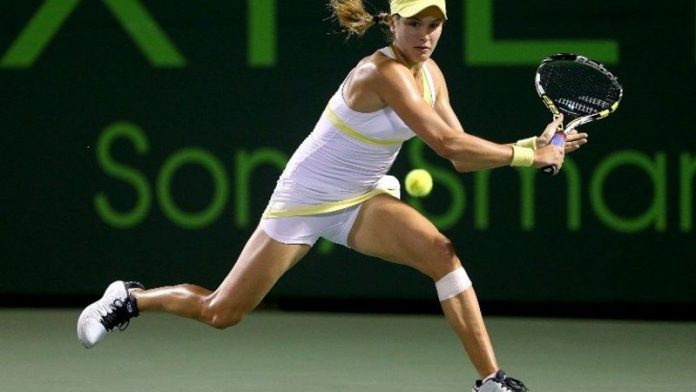 Maria Sharapova and highly-rated teenager Eugenie Bouchard may have shared a sponsors' photo-shoot, but the Russian superstar has pledged no favours when the pair meet for a place in the French Open’s final 32.

Sharapova, the defending champion and world number two, and 19-year-old Bouchard, last year's junior Wimbledon winner, are both on Nike's books with the Canadian youngster even wearing on-court clothing designed by the Russian.

However, Sharapova intends to put the world number 77, who won her maiden Grand Slam match on Monday, firmly in her place when they meet for the second time this year.

"She's still a competitor. I met her a few times. We actually did a shoot back in Melbourne together. She seems a very nice girl and obviously has a great game and is one to watch," said the champion.

"But when you're at that point in your career, every month is a learning experience for someone her age and at that level.

"You have to respect anyone that's across the net from you. There is a reason why they're there, whether they have had a good week or a bad week or they're not having a good month or they're having a great month.

"It just doesn't matter, because you're going to be facing them and your job is to try to beat them.

A good start
Sharapova wasted no time in reaching the second round on Monday, firing 25 winners and surrendering just eight points on serve to beat Taiwan's Hsieh Su-Wei, 6-2, 6-1.

The teenager made the semi-finals on clay in Strasbourg last week and despite having lost to Sharapova in Miami in March, where she was allowed just two games, she insists she will not be overawed by facing the world's richest sportswoman.

"I hope it's going to be on the Chatrier Court. It's very exciting. I have worked all my life just for that, so I'll have fun and do my best," she said.

Sharapova completed a career Grand Slam when she won in Paris last year and intends to go through the same routine each day in the French capital; walking in the park in the morning, practice sessions and lengthy Skype conversations with her father back in Florida.

"This morning I went to the park a little early because I knew I had a long day. I was just sitting there and I remember myself sitting in the same position last year," she said.

"I was thinking of all the things you have in your life, and at the end of the day I'm still doing the same thing. And I love it just as much, which puts a big smile on my face.

"It's crazy. You look at the playground in the park, and then, four hours later you're going to be on one of the centre courts, going to be playing in front of thousands of people. That just still gets me really excited." – AFP