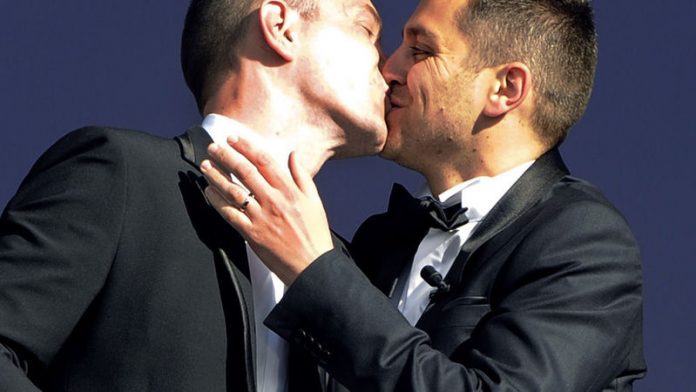 "It is a great honour to tell you that you are united in marriage by law," Helene Mandroux, the visibly moved mayor of the southern city of Montpellier, told the couple as Frank Sinatra's song Love and Marriage filled the room.

The high-profile ceremony, also attended by the Socialist government's spokesperson Najat Vallaud-Belkacem, is the apex of months of huge divisions in France over a Bill allowing same-sex marriage and adoption.

The Bill was finally signed into law on May 18 to cheers from supporters, but opponents have vowed to fight on and tens of thousands converged in Paris on Sunday for a demonstration that ended in violence.

Wearing black suits – complete with a tie for one, a bow tie for the other – Autin (40) and Boileau (30) walked into the town hall room before the ceremony to the sound of Nat King Cole's song Love.

They sat in front of Mandroux, flanked to her right by a portrait of President Francois Hollande – who had made a law allowing gay marriage and adoption a centrepiece pledge in his election campaign last year.

Holding hands, they listened to the Socialist mayor saying their marriage was "historic", that the law was a "law of equality, of fraternity" and that their union was "a symbol for all of France".

Police surveillance
After exchanging wedding rings, they kissed to general applause. Autin – a gay rights activist – later made a short speech peppered with pauses as he wiped away tears, thanking supporters and his family.

"Solidarity always has the upper hand over hate," he later said in front of television cameras from around the world.

Mandroux also read out a letter by Jack Lang, a former culture and education minister who is gay. "Your happiness delights me … Here's to love, here's to life."

The ceremony took place under strong police surveillance following months of protests by supporters and opponents of same-sex marriage – some violent – but no major incidents were reported.

Supporters had gathered outside the town hall where the marriage took place, as had a few trouble-makers who let off a flare. But the happy couple addressed the crowd after the ceremony on a balcony without any problem.

Up to 100 police were called in to monitor the marriage in Montpellier – known as the "French San Francisco" for its gay-friendly reputation – with another 80 in reserve.

'14th country to recognise gay marriage'
Hundreds of guests attended, as did more than 230 journalists and technicians working for over 100 media outlets from around the world, including China.

"We are the 14th country to recognise gay marriage," Mandroux said earlier.

"If there are so many journalists, maybe it is because they were surprised by the reaction of opponents. They were astonished that there could be such violence in the country of human rights."

The marriage caused consternation among opponents of the law, with the conservative Catholic group Civitas saying it opened up Pandora's box.

"Prisoners of a logic that goes against nature, how can lawmakers refuse polygamous or incestuous marriage between consenting adults for long?" Alain Escada, president of Civitas, decried in a statement.

Except for the media, guests at the ceremony are just friends and family of the couple, Autin said, and Vallaud-Belkacem herself is attending as a private citizen and not a state representative.

Issue of gay adoption?
Alice Nkom, a prominent Cameroonian lawyer who has long campaigned for gay rights in her country and was cited as one of "the eight most fascinating Africans in 2012" by the New Yorker magazine, was also present.

Though officially a secular republic, France is overwhelmingly Catholic, and the issue of gay adoption and marriage sparked a deeply divisive debate.

Supporters and opponents of the Bill began protesting last autumn when it was adopted by the Cabinet, and continued to hold regular demonstrations throughout the country as it made its way through Parliament. –AFP