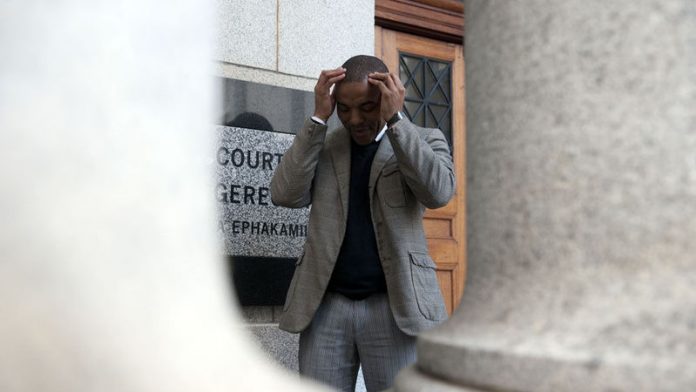 The court case brought by political science student Chumani Maxwele, was held up after a settlement offer was made to him.

Maxwele, who denied claims by the VIP guards that he pointed his middle finger at Zuma's cavalcade shortly before his arrest in Cape Town in February 2010, is believed to have turned down the settlement offer from Mthethwa. Details of the offer are being kept under wraps.

Mthethwa's spokesperson Zweli Mnisi declined to comment on whether an offer had been made. The matter was set down to begin in the Western Cape High Court on Monday morning.

Journalists milled around outside the court room all morning, waiting for a decision to be made on whether the case would proceed or whether a settlement would be reached.

At the end of a long day of discussions with his client in chambers, Maxwele's lawyer, Neil O'Brien, said he was prohibited from commenting on what had transpired.

"All I can say is that I have no clear instructions from my client," he said. "The matter is likely to be postponed."

However, Maxwele was clearly not a happy man at the end of the day.

"I feel frustrated by it all," he told the M&G. "I feel we have been undermined."

Torture allegations
The 28-year old student, who is studying at the University of Cape Town, had waited a long time for his moment in court after apartheid-style torture tactics were allegedly used on him more than three years ago.

Maxwele was arrested while out jogging by Zuma's VIP guards in full view of witnesses and motorists on De Waal Drive in Cape Town.

The student had his hands tied behind his back and a black hood thrown over his head by the police, after the guards accused him of "pointing his middle finger" at Zuma and his cavalcade.

Maxwele has always claimed he had gestured for the cars to move on because of their sirens.

"I waved my hand, 'hamba, hamba', because the noise was very excessive," he said shortly after his arrest in 2010.

"I think there were six cars and all of them seemed to have sirens going."

The student alleged the VIP unit had fabricated the story that he had pointed his middle finger at the state president and sworn at the police.

Rough treatment
Describing his arrest, Maxwele alleged he was shoved into the vehicle and his hands tied with a cable behind his back.

"We drove for a few minutes but they could see I was looking at them, so they pushed me on to the ground," claimed Maxwele.

"They said, 'Who do you think you are?'" Maxwele said the ranting continued while they drove and it was only at this point he realised that this was a presidential motorcade.

"They said to me, 'How can we hate white people who disrespect the state president, and now here are you, a black person, disrespecting the state president.' Then they got a big black bag and they pulled it over my face so I couldn't see anything," he alleged in an interview in 2010.

"It was horrifying and I was paralysed. I felt unable to breathe."

The men removed the bag from his head at the president's residence in Rondebosch and asked for his name and ID number, he said.

'Nonsensical'
The policemen were apparently from Pretoria and had to ask for directions to Rondebosch police station, where he was introduced in the charge office: "Here is the man who disrespected the president."

A Rondebosch policeman told him the reason Maxwele had been arrested was "nonsensical", he said, and he then was transported to Mowbray police station.

"Again, they introduced me as the man who disrespected and insulted the president. They were laughing and joking that I had said the president had seven wives. I kept trying to set the record straight."

Maxwele alleged he was kept in a cell without a bed overnight and offered no food. When he tried to sleep on the floor, he was told to sit on the chair.

Exhausted, Maxwele said he was taken to the Wynberg court the next morning, where he was placed in a communal cell. At 4.30pm he was released, without appearing in court.

While the matter of the damages claim remains unresolved, Mthethwa has launched a launched a last-ditch attempt to avoid having to apologise to Maxwele.

The police minister has applied for a review of an appeal finding by the South African Human Rights Commission, which upheld its earlier ruling that he should apologise to the student.

Maxwele is frustrated by the minister's stance.

By continuing to fight the issue, Mthethwa was sending out a message that he was protecting the officers who had infringed his human rights, he said.