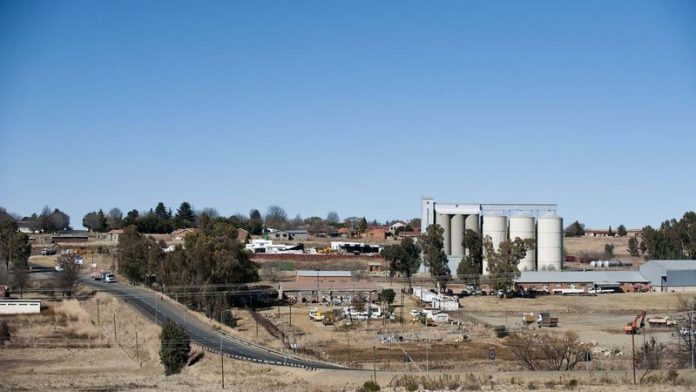 Up to half a billion tax rands are being poured into a Free State dairy farm whose links to the Gupta family appear to be increasingly clear.

Provincial budget figures show a huge redirection of resources towards this single “public-private partnership” near the town of Vrede, reducing budgets available for other development needs.

But there are serious doubts about the project’s viability. Many locals have questioned it, and the Indian dairy giant, Paras, whose name was invoked to lend technical credibility maintains it knows nothing about it.

An amaBhungane investigation this week threw up more links to the controversial Gupta family, including:

?The dairy project is led by Estina (Pty) Ltd, a South African-registered company, which last week denied any links to the Guptas other than giving a subcontract to a company owned by the controversial family.

The denial seemed thin given Estina’s only director being an IT sales manager apparently close to the Guptas and Estina’s registered address being in the same Sandton building as several Gupta businesses, as the Mail & Guardian reported last week.

The new information strongly suggests that the Guptas, who are close to Free State premier Ace Magashule and employ his son, have played an active behind-the-scenes role in the dairy project.

The project
Seemingly conceptualised during the first half of last year, the project started taking off when the Phumelela local municipality, which includes Vrede, ceded the Krynaauwslust farm outside the town to the province last December. The provincial agriculture department, which will fund the project, immediately handed it to Estina under a 99-year rent-free lease.

The plan is for Krynaauwslust’s 4400ha to house a large herd of cows and a huge processing plant for milk from the farm and beyond.

While benefit is promised to small farmers – half the 1000 cows are to be donated to community members, who will sell the milk back – an Estina proposal obtained by amaBhungane also talks of 51% of the project being transferred to “at least three selected grant recipients”, an apparent reference to large black economic employment (BEE) beneficiaries whose identities are unknown.

A second proposal document hails the technical prowess of Paras. It calls Estina “the local representative company which has been appointed by Paras” to engage with the provincial agriculture department on the dairy project. Both documents carry Estina and Paras logos. 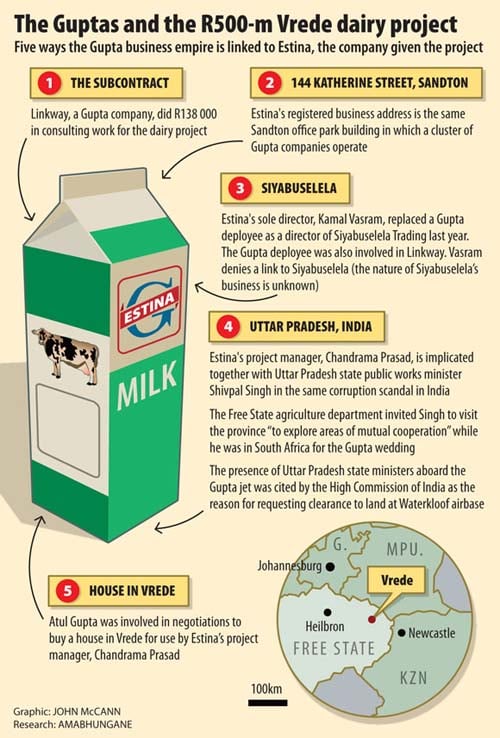 But this week a Paras spokesperson in India, Bharti Singh, repeated the company’s denial that it knows of Estina or the Vrede project. Singh said she had circulated amaBhungane’s query to all Paras directors. “We have no businesses in South Africa. We don’t know Estina. There is nothing that connects Paras dairy to South Africa,” she said.

The house, the manager and Atul Gupta
Also late last year, Estina bought a former guest house, De Oude Pastorie, in Vrede to accommodate Estina staff. A person close to the sale said this week that the ultimate decision-maker was “someone in Johannesburg”.

A second well-placed source said Atul Gupta was intimately involved in the negotiations. AmaBhungane saw a business card for Estina’s project co-ordinator with names including “Atul” and “AW Jaffer” written on the back. Abdul Jaffer is a director of many Gupta companies.

In that position, Prasad was known to Shivpal Singh Yadav as well. Shivpal is Mulayam’s brother and the public works minister in his Cabinet – a position he now holds again.

Reinforcing their proximity, and questions about the dairy project, is that Prasad and the two Singh Yadav brothers were jointly implicated in a corruption scandal that shook their government (See “Scandal links dairy project manager and Gupta wedding VIP”).

The wedding guest
Shivpal Singh Yadav was among the Gupta wedding guests at Sun City early last month. His attendance at the wedding, and the fact that he combined his trip with an official visit to the Free State at the invitation of the agriculture department to discuss “irrigation and public works”, was controversially used by the Indian high commission to justify the landing of the wedding plane at Waterkloof.

The high commission said the Uttar Pradesh minister and the Free State government signed a memorandum of intent during his visit covering the “economic development, irrigation and agriculture sectors”.

Yet, despite his past association with Shivpal Singh Yadav and the fact that the Free State agriculture department both funded Estina and invited the Uttar Pradesh minister, Prasad this week denied the minister’s visit was connected to the dairy project at all.

In its 2012 budget, the department said it would spend between R20-million and R40-million every year for four years on Mohoma Mobung.

But the dairy project appears to have engulfed these modest intentions. One of the Estina proposals obtained by amaBhungane announced that the department, “in line with the vision of the Mohoma Mobung initiative”, had identified the Vrede dairy as its “flagship project”.

The proposal said the department had commissioned a study “validating” the dairy and had sent a “high-level team” to India where it supposedly met Paras, “the largest private milk producer in India [which] agreed in principle to work with them on this prestigious project”.

Estina provided costing for the project, totalling R500-million. It then requested “the government to commit to an annual grant of R100-million per year for five years” for the dairy.

Figures in the agriculture department’s recent budgets suggest it may be meeting this request.

Dairy farm project manager Chandrana Prasad was accused of involvement in a corrupt police recruitment scam while he was secretary to the chief minister of the north Indian state of Uttar Pradesh in 2006.

The allegations were the subject of an investigation ordered when the Mayawati administration took over the government in 2007 after ousting the Samajwadi Party.

Prasad was the special secretary to the chief minister of the previous government, Mulayam Singh Yadav.

About 18000 police constables were recruited in a process that became the subject of corruption allegations and a series of investigations and court cases.

A report prepared by the Uttar Pradesh chief secretary concluded: “Prima facie it is clear that the then Honourable Chief Minister [Mulayam Singh] meticulously engineered the entire recruitment in a planned systematic manner.”

Speaking to amaBhungane, Prasad confirmed his identity as the former secretary to Mulayam Singh but denied any involvement in the recruitment scandal.

It noted: “It is prima facie proved that direct and indirect co-operation in these activities were given by the then director general of police… and the then special secretary to chief minister, Chandrana Prasad.”

It added: “The clear involvement of Shivpal Singh Yadav, the then minister of public works department, in illegal gratification of money with the co-operation of some other persons and corruption has come to light.”

He returned to his post as public works minister when the Samajwadi Party returned to power at the beginning of 2012.

The preliminary findings against Shivpal Singh and Prasad were given judicial notice in a 2009 judgment of the Allahabad High Court, which found that the findings had not been placed in question.

The allegations were referred to the Indian federal Central Bureau of Investigation for further action, but the CBI argued that it did not have the capacity to accept the case and the Indian Supreme Court struck down a lower-court order for the CBI to probe the alleged scam. The Mayawati government lodged an appeal petition, which was pending when the Samajwadi Party regained power at the beginning of 2012.

One of the new Cabinet’s first decisions was to withdraw the appeal against this judgment.

Media reports said new Chief Minister Akhilesh Yadav, Shivpal Singh’s nephew, had decided to withdraw the inquiries and drop the charges on the grounds that they were “politically motivated”. – amaBhungane reporters