I need your advice on this, Mr Hulley … 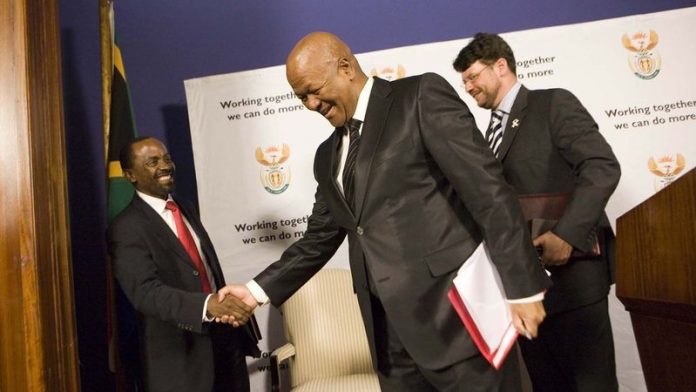 Lakela Kaunda (the president's chief aide and left-hand woman): Mr President, I'm sorry to bother you, but they're saying you're not able to appoint a new national director of public prosecutions.

President Jacob Zuma: Who's "they"?

Kaunda: That pesky professor of law down in Cape Town, the one with the blog.

Zuma: Oh, don't worry about him, my dear – none of my people read constitutional law blogs.

Kaunda: But, Mr President, he does make a rather good point.

Zuma: Really? What is it?

Kaunda: He says that because the court has ruled that the decision to drop those corruption charges against you …

Zuma: You mean Thabo's corruption charges against me …

Kaunda: Yes, Mr President, I apologise: Thabo's corruption charges … That the decision means that the court can judicially review the decision and, well, you know what those judges are like – when the matter comes back before them later this year, for the full judicial review hearing, they're more than likely to order that the national director of public prosecutions reconsiders whether to reinstitute the charges – Thabo's charges – against you.

Zuma: But I don't have a national director of public prosecutions.

Kaunda: That's precisely the point that Professor Pierre de Vos makes, sir: that you are supposed to have appointed one, and without undue delay, and that the reason you don't have one – and haven't had one for years – is that it's not in your interests to make such an appointment, given the reasonable likelihood of that person having to reinstitute the charges – Thabo's charges – against you, and that, given the clear conflict of interest, you should invoke section 90 of the Constitution and delegate the decision to the deputy president.

Zuma: You're beginning to sound like a lawyer, Lakela, I thought you were a journalist. Is Hulley in today?

Kaunda: I'll check, but I think it's one of his days; excuse me, sir.

Zuma: What's your advice? Must I hand this over to Kgalema?

Zuma: On whether the conflict of interest really means that I'm "unable to fulfil" my duties, to use the words of Section 90?

Hulley: No, Mr President, on whether you're asking me as legal adviser to the president (part-time) or as your retained private attorney? But, Mr President, if I may say so, I'm impressed that you've been reading the Constitution …

Zuma: … Yes, well, it seems to dominate my life. So, what's the answer if you're wearing the presidential-legal-adviser hat?

Hulley: De Vos is right. Moreover, you need to show that you take conflicts of interest seriously and there can't be a more serious conflict of interest than the one between your responsibilities as president of the republic under the Constitution, on the one hand, and the possibility of going to prison on the other.

Zuma: I don't like the sound of that. Would you care to put on your other hat?

Hulley: Certainly, sir. As your attorney, my strong advice is not to lose control of the decision. After all, the deputy president is hardly your political friend these days, is he? You need either to put off the decision again, forcing De Vos and his ilk to take you to court for your failure to make the appointment "diligently and without delay" under section 237 of the Constitution, or else appoint someone who, you know, understands the delicacy of your position.

Zuma: Mmm. I see. What about this: Why don't I appoint someone manifestly unsuitable, like I did with Menzi Simelane, and then they're bound to challenge it again, causing further delay?

Hulley: You're beginning to sound like a lawyer, Mr President; I thought you were a political leader!

Hulley: Well, that would be the state, Mr President. I seem to keep forgetting to invoice you for the private legal advice …

Zuma: Really? How kind you are. Now, what about our other little issues?

Hulley: Well, sir, Minister Radebe seems to have done a fine job cleaning up the Gupta-Waterkloofgate scandal. And the public seems to have bought the ministerial inquiry's finding that the official was responsible for the decision.

Zuma: So, I'm off the hook? I thought Koloane had said something about pressure from "Number One". Aren't I "Number One"?

Zuma: He's such a fine minister, that chap.

Hulley: Indeed he is, sir. And, happily, neither the public nor the media seemed to have pointed out the distinction between political responsibility and political accountability, nor the abundant international ­literature on the importance for democratic accountability of understanding and applying the distinction.

Zuma [with a deep-throated chuckle]: Michael, you're beginning to sound like a political scientist; I thought you were my lawyer!

Richard Calland's new book, The Zuma Years: South Africa's ­Changing Face of Power, will be ­published by Zebra in August