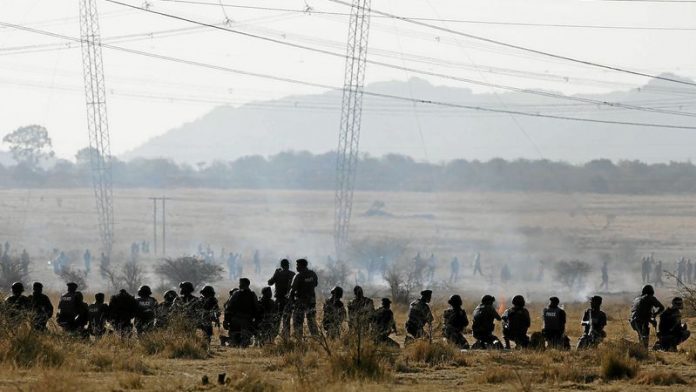 "I heard [tear gas] shooting. I then realised that strikers had turned against police. It wasn't a very good scene," he said. "I saw warrant officer Monene being chopped and killed in front of me … I saw how officer Lepaku was killed."

Several of the officers' family members were upset by Mpembe's testimony and left the auditorium in Centurion.

"Captain Baloyi defended himself. At the same time, the police came to his rescue and he was taken to hospital," said Mpembe.

The strikers robbed the dead officers of their pistols, a shotgun and rifle.

Mpembe said he then decided police should withdraw and return to the joint operations centre.

He later identified the officer who had fired the tear gas when the strikers turned on police. "He said he had heard an order [to fire], but he couldn't tell me who gave the order," said Mpembe.

"The emotions were extremely high, but as a senior officer, I tried to cool down the members," he added.

Blamed for deaths
Previous witnesses testified that police officials had issued threats to Mpembe, blaming him for the deaths of the two officers.

Mpembe said he was approached by Lieutenant colonel Salmon Vermaak, who told him that his life was in danger as other officers blamed him for the deaths of their colleagues.

They claimed to have been against Mpembe's instruction to go after the armed strikers.

Mpembe, who is the deputy provincial commissioner responsible for operational matters, said he told Vermaak he would not withdraw from the operation until he had handed over to Major General Ganasen Naidoo.

The commission heard the officers were killed just several hours after Mpembe's arrival at Marikana. He said he had been on leave and was called to Marikana by provincial police commissioner Luzuko Mbombo that morning.

National police commissioner Riah Phiyega then appointed him overall commander of the operation.

Mpembe told the commission that since completing his basic police training in 1996, he had received extensive training in crowd management.

Probe continues
Vuyani Ngalwana, for the police, is leading Mpembe in delivering his evidence-in-chief.

The commission, chaired by retired judge Ian Farlam, is investigating the circumstances that led to the deaths of 44 people during the unrest at Lonmin's Platinum mine in Marikana last year.

Police shot dead 34 striking mineworkers on August 16. Another 10 people, including two police officers and two security guards, were killed in the preceding week.

Mpembe, led by Vuyani Ngalwana, is delivering his evidence-in-chief before the commission.

President Jacob Zuma has said he would not fire Police Minister Nathi Mthethwa for the Marikana shooting because he viewed it as a mistake, the Farlam commission of inquiry heard on Thursday. – Sapa