Movie of the week: Star Trek into Darkness 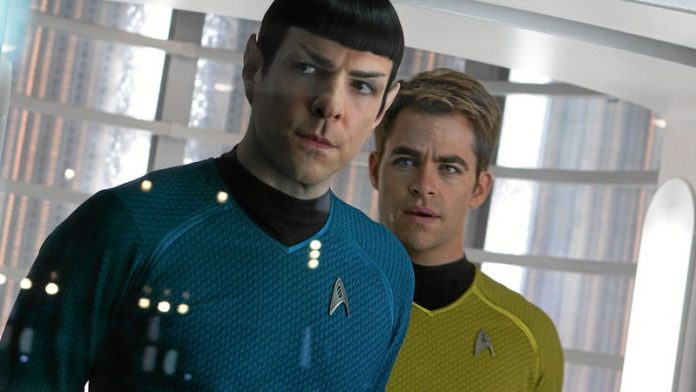 JJ Abrams’ new Star Trek instalment is as glitzy as his first in 2009, but it’s the arrival of Benedict Cumberbatch as a mysterious new foe that fuels this outing. The initial bromance excitement of the great Kirk-Spock adventure now being over, the second episode — Star Trek into Darkness (no colon, apparently) — brings us to the anticlimactic man-marriage of their rebooted career aboard the USS Enterprise.

It’s the latest in what promises to be a long series of films: a big, glitzy, high-energy drink of a movie with a glossy tech sheen, long on lens flare, shorter on other kinds of flair, and only showing real excellence in the continuing subtle, seriocomic performance of Zachary Quinto as Spock. It’s watchable, but Star Trek into Darkness is already showing signs of getting tangled up in all the growing strands of self-created mythology and, perhaps more worryingly still, it looks as if director JJ Abrams and screenwriters Roberto Orci, Alex Kurtzman and Damon Lindelof have not quite grasped what was so great about the 2009 movie: the all-important dynamic between the captain and the first officer.

Right off the bat, Star Trek into Darkness zaps us with the darkest fear of all: the death of Spock, that potent Trek subject that I can’t help associating with the episode of Seinfeld in which George reveals he is more moved by Spock’s demise than by the death of his own fiancée.

The crew are all assembled: Chris Pine is Kirk, and Uhura (Zoe Saldana) is still in a relationship with Spock, though the affair is naturally subordinate to his male bond with the captain. Sulu (John Cho) is there. Simon Pegg plays Scotty with a terrible Scottish accent that is still weirdly better than Chekhov’s Russian accent, despite the fact that Anton Yelchin, playing him, was actually born in Russia. Karl Urban plays grumpy medic Bones, who cordially dislikes Spock. (In times of old, we wondered about a deliberate obscenity in “Are you out of your Vulcan mind?” In this movie, Bones tells Spock: “Boy, you really are a comfort.”)

This Enterprise task is an observation mission, investigating a primitive tribe on a jungly planet, but a desperate situation develops from which Spock cannot be rescued without infringing those Starfleet rules for which he is such a stickler. Spock is apparently ready to die.

The incident creates tension between him and the captain that colours their entire working relationship as they tackle a new, terrifying enemy, the mysterious John Harrison, played by classy British actor Benedict Cumberbatch. This sinister figure causes a massive explosion in London, then escapes, apparently intent on causing a catastrophic war. But who is Harrison, and is he working alone? As he faces off with Pine, Cumberbatch does a lot of impassive and charismatic gazing, indicative of infinitesimally amused unconcern. With that expression of his, he’s in danger of becoming the Joseph Fiennes of his generation.

But I like my Brit baddies to have droll dialogue (like Loki in The Avengers), and John Harrison has none; he does all this supercool gazing, even when he is getting punched repeatedly in the face, but he is the tiniest bit dull. And anyway, Kirk already has a hugely evolved, scarily cerebral sparring partner — Spock. We are heavily invested in Spock and his fascinatingly tense, prickly, and sometimes antagonistic, relationship with Kirk. There are now three people in this emotional guynamic; John Harrison is a bit of a third wheel.

Well, as the story unfolds, connection with the pre-existing Star Trek mythology is revealed — the first history that was altered when JJ Abrams magicked the new version into being. It is, arguably, part of a nerd-myth tendency in the film; I found it intricate and ingenious, though this is how a series can get bogged down.

The dilithium crystals powering the entertainment warp drive are still pretty much undamaged. Star Trek into Darkness has power and engine poke, although I am a little disappointed by the way people are getting transported these days: with lots of little swirly white lines surrounding them as they disappear and reappear: I prefer the dense, sparkly, particulate shimmering as the bodies faded.

The title of Michael Haneke’s "Amour" is a challenge: not ironic, not celebratory, and yet somehow not complicated either.
Read more
Advertising
Continue to the category
National