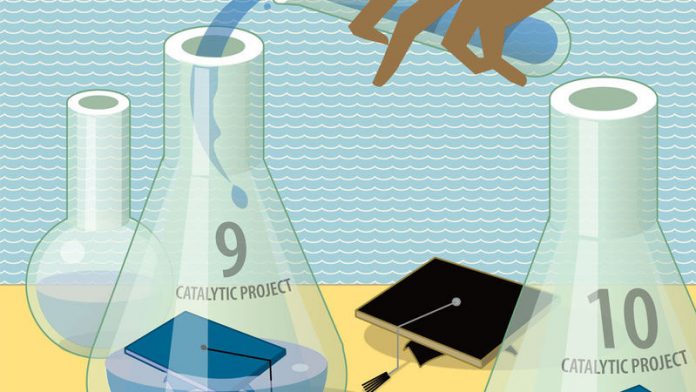 Catalytic projects are designed to open new areas of research and curriculum development in the humanities and social sciences. Each one is tasked with creating national and international networks of scholars and most of them have a life of 12 to 18 months. Such networks are seen as a first step for the creation of centres of excellence in the identified fields.

The first is a partnership with the South African Humanities Deans Association, titled "Lineages of Freedom". This involves a vigorous engagement with the public through workshops, colloquia, performances and talks on themes related to the key challenges the country faces, and engaging with contested ideas about our democratic dispensation.

The second is a network of historians, archaeologists, anthropologists, linguists and scientists that concerns itself with precolonial history in Southern Africa. It is led by Professor Lungisile Ntsebeza, the AC Jordan chair of African studies at the University of Cape Town.

The third is a network led by Dr Joel Netshitenzhe and Dr Mcebisi Ndletyana of the Mapungubwe Institute for Strategic Alternatives, in co-operation with the universities of Venda and Limpopo, to chart how our heritage sites could be turned into knowledge hubs and centres. These include a scoping exercise led by the University of Fort Hare for a migrant labour museum and heritage hub (or hubs) in the Eastern Cape.

The fourth divides into two sub-projects because it translates into research on traditions of face-to-face education and traditions of distance or workplace forms of popular education. One is led by Professor Shirley Walters of the University of the Western Cape, the other by Professor Rosemary Moeketsi of the University of South Africa in collaboration with the Nelson Mandela Metropolitan University in Port Elizabeth.

The fifth is about hidden voices and again breaks down into two. One is led by Professor Eddie Webster, emeritus professor at the University of the Witwatersrand and director of the Chris Hani Institute, and Dr Irma du Plessis of the University of Pretoria, and attempts to recover intellectual and scholarly work that did not see the light of day in the pre-1990 period. The other is led by Professor Premesh Lalu and Dr Heidi Grunebaum of the University of the Western Cape, and attempts to recover musical and artistic work of the same period.

The sixth is about the social and aesthetic sources of contemporary creativity. One is about all forms of grassroots creativity in the country and is led by Dr Sazi Dlamini from the music programme of the school of arts of the University of KwaZulu-Natal in collaboration with the University of Zululand's arts faculty. Dr Kenneth Netshiombo, dean of arts of the Durban University of Technology, and Dr Elmarie Costandius of the fine art department of the University of Stellenbosch are networking all the design departments of the universities of technology exploring design innovations. Professor Jeanne Zaidel-Rudolph is leading a network to explore a possible catalytic project on musical composition.

The seventh is a scoping exercise, led by Professor Tina Uys of the University of Johannesburg, to explore how to strengthen professional associations in the humanities and the social sciences. This project has produced a research-based draft report that will be made public in August and will form a sound basis for co-operation with the Academy of Science of South Africa, especially because it concerns scholarly journals. A network about the changing worlds of work and the skills profile of work processes will be added to this area soon.

The eighth project is about African languages and their importance in concept formation in the humanities and social science fields. It is being led by Professor Russell Kaschula and Dr Pam Maseko, both of Rhodes University. There is the possibility of this being extended to cover an idea pioneered by Professor Antjie Krog on indigenous language literatures.

The ninth is a network led by Professor Pumla Gobodo-Madikizela of the University of the Free State that concerns itself with post-conflict reconstruction and reconciliation.

The 10th project, on socioeconomic and ecological alternatives, is being negotiated with the University of the Witwatersrand, the Council for Scientific and Industrial Research, the North-West University and South African National Parks. The proposal is pending.

The 11th project that has appeared, beyond the 10 recommended in the charter, is on India-South African collaborations in key areas of mutual interest. This is in an embryonic stage, and the Indian Council for Social Science Research and the National Research Foundation will sign a memorandum of understanding to facilitate what is appro­priate. A workshop in Durban between deans of humanities and social sciences from both countries was held in April; and a report and proposal on how to energise the scholarly ­relationship between the countries and, more specifically, the existing centres of research and co-operation, is pending.

The largest challenge arises out of the appointment of a humanities and social sciences project director on the Brazil, Russia, India, China and South Africa (Brics) grouping's council of think-tanks, which opens up areas of uncharted co-operation. Unfortunately, although trade winds have been blowing strongly in that direction, the scholarly capacity in the country is lagging far behind.

So the catalytic projects segment of the work of the humanities charter initiative is running on most cylinders. Care has been given to ensure a fairly equitable spread of the work across the higher education map.