Hougaard, Louw out of Scotland Test 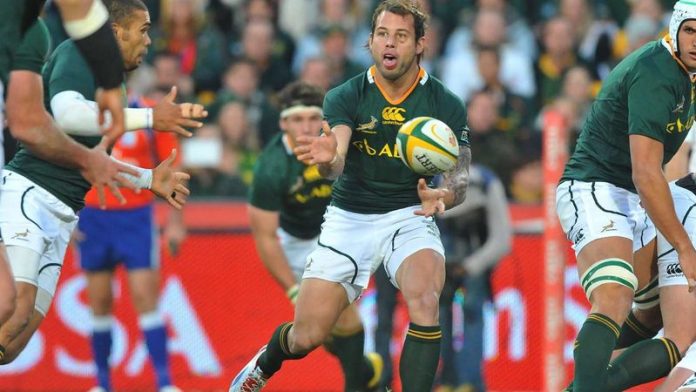 Flanker François Louw will also miss the Test against Scotland in Nelspruit on Saturday.

The uncapped Schreuder is the second scrumhalf replacement in the Springbok squad in three days, following Piet van Zyl's call-up for Jano Vermaak, who injured his hamstring in the 44-10 victory over Italy in Durban on Saturday.

Hougaard was sent for scans and a specialist opinion in Pretoria on Tuesday to assess a knee injury he picked up during Vodacom Super Rugby, which flared during training in Hazyview on Monday.

"At this stage, François doesn't require surgery, but will be re-evaluated in two weeks' time to see if the injury has settled sufficiently for him to resume playing," Springbok team doctor Craig Roberts said on Tuesday.

Springbok coach Heyneke Meyer said losing two scrumhalves in such a short space of time was an obvious setback, but he had confidence in Van Zyl and Schreuder.

"Piet's attitude has been fantastic since he joined us on Sunday, and he's worked hard on and off the training field, making sure he gets to know and understand our plays as quickly as possible," Meyer said.

"He's been playing great rugby for the Toyota Cheetahs and I have a lot of confidence in him.

"Although Louis has not officially been part of our set-up yet, he has helped out at two of our training camps in Cape Town before, so coming into the squad will not be all new to him."

Wedding preparation
It was also announced on Tuesday that Louw would be released from the squad in preparation for his wedding on Sunday.

Louw will marry Sarah Tatham on Sunday, and Meyer decided it would be best for the team and the loose forward to focus on his wedding.

"This is a very precious time for François and Sarah and I want them both to enjoy this very special occasion," Meyer said.

"François is extremely committed to the Springbok cause. I wanted to give him the entire week off, but he insisted on training with the squad this week.

"He really wanted to play on Saturday. While I respect that and believe playing for your country should always come first, one needs to be flexible when it comes to special occasions like these, which is why I have told him to take a few days off."

Wedding day
The 27-year-old Louw played in his 18th Springbok Test in Durban on Saturday and has been an integral part of the national squad since he was recalled in September 2012.

"Family is very important to us and I would like to wish him and both families the very best for their big day," Meyer said.

"François will join us again in Pretoria on Monday, and I know his full focus will then be with the Springboks again."

Meyer said there was sufficient depth at loose forward in the squad and this would also grant him an opportunity to look at other players in the Springbok set-up.

Louw expressed his gratitude for the opportunity to enjoy his wedding day, which was planned a few months ago for June 16.

"My country will always come first and I would have loved to play for the Springboks this weekend, but I appreciate the coach's view and the fact that he has granted me a few days off," Louw said.

"Getting married is an important day in any person's life and I'm looking forward to it, but I'm equally excited to join the squad again next week." – Sapa