Activist accuses NYU of coming under pressure from China 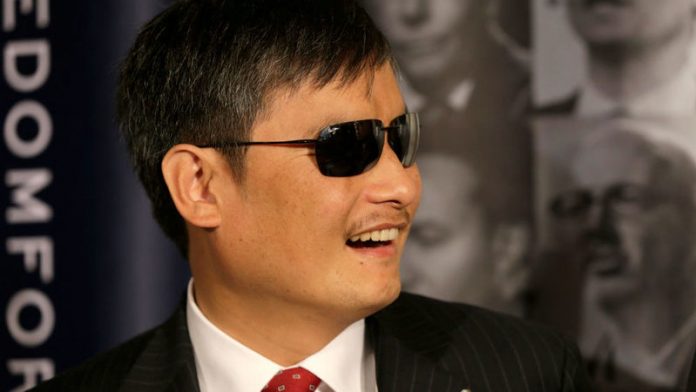 Guangcheng, who was allowed to travel to the US after escaping from house arrest, said on Monday that New York University (NYU) is forcing him and his family to leave at the end of this month because of pressure from the Chinese government. The university denied Chen's allegations.

Chen said in a statement that China's Communist Party had been applying "great, unrelenting pressure" on NYU to ask him to leave, though he did not provide details or evidence to back his claim. Chen said Beijing's authoritarian government has more influence on the American academic community than is perceived.

"The work of the Chinese Communists within academic circles in the United States is far greater than what people imagine, and some scholars have no option but to hold themselves back," he said. "Academic independence and academic freedom in the United States are being greatly threatened by a totalitarian regime."

NYU officials called Chen's account puzzling, saying that his fellowship was meant to be a one-year position and had simply concluded as planned, and that school officials have been talking with him for months about what his next step might be.

Chen sparked a diplomatic crisis between China and the US last year when he fled to the US Embassy in Beijing from house arrest. Since last May, he'd been a special student at NYU's US-Asia Law Institute. He has been working on a book due out later this year.

NYU spokesperson John Beckman said in a statement on Monday that the conclusion of Chen's fellowship had nothing to do with the Chinese government.

'Puzzled and saddened'
"We are very discouraged to learn of Mr Chen's statement, which contains a number of speculations about the role of the Chinese government in NYU's decision-making that are both false and contradicted by the well-established facts," Beckman said.

Beckman said that even before Chen's family's arrival in the States, the fellowship he was to take at the university was discussed as a one-year position.

"NYU believes it has been generous in supporting this family, and we are puzzled and saddened to see these false claims directed at us," Beckman said.

A US newspaper, the New York Post, had earlier reported that NYU's decision was related to the university's development of a campus in Shanghai, though the university rejected the claim.

The dissident said that as early as last August and September, three to four months after his family had arrived in the United States, NYU was already discussing their departure. Beckman responded that the university began talking to the Chens "not because of some fictional 'pressure' from China, but so that they could use the months to make their transition a smooth one." – Sapa-AP