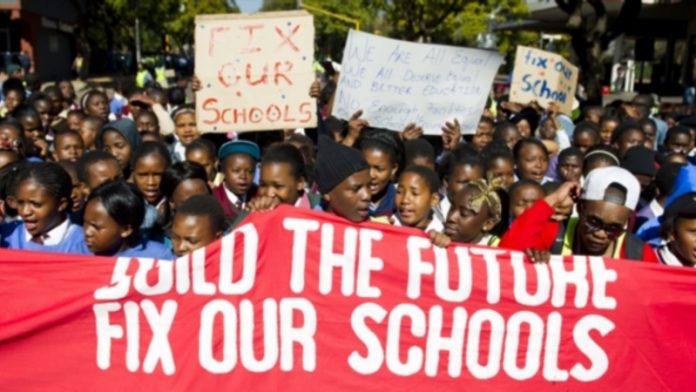 In a statement released on Tuesday the department called Equal Education "a group of white adults organising black African children with half-truths".

Motshekga's spokesperson Hope Mokgatlhe told the Mail & Guardian on Wednesday that the statement will not be retracted.

"There's nothing racist" in the statement, Mokgatlhe said. "Obviously people will interpret it differently. But if they feel there should be a retraction, they are more than welcome to approach the South African Human Rights Commission."

Contributors to social media networks have lambasted the department for the statement. On Twitter, activist Zackie Achmat called it a "racist attack" on the NGO. Vusi Pikoli, the former National Prosecuting Authority boss, said he went to bed on the day the statement was released hoping he would wake up to news that the department had retracted the statement.

@ZackieAchmat @VusiPikoli @equal_education @YoliswaD They are failing, we all agree. Their spat with EE, I'm not gonna own, sounds personal.

I sleep,I wake up and there is no retraction of the DBE statement.What does this tell me as an ordinary South African?

I sleep tonite hopeful that when I wake up tomorrow DBE will disown the statement issued on its behalf.

The department released the statement days after Equal Education filed urgent new papers in the Bhisho High Court against Motshekga. Citing the minister's "long history" of delays and "broken promises" concerning publication of minimum norms and standards on school infrastructure, the papers seek a court order compelling her to publish these.

The court agreed the matter was urgent and set it down for hearing early in July.

Then the department struck back. "It is interesting to note the sudden interest that Equal Education is taking in the education of the African child," its furious statement said.

"Suddenly the NGO knows all about the challenges that African children face against the privileges they have enjoyed. The struggle for black children to receive a decent classroom in which to learn has been ongoing for many decades, even before the days of Bantu education …

"However, to suddenly see a group of white adults organising black African children with half-truths can only be [sic] opportunistic, patronising and simply dishonest, to say the least."

Not racist to mention history
Mokgathle said the statement sought merely to highlight that a lack of resources in schools in black communities was a long-standing issue stemming from the apartheid era that the department is now addressing.

But for the South African Institute of Race Relations, the statement is racist, its education researcher, Jonathan Snyman, told the M&G. "The argument made in the statement is nothing more than an ad hominem fallacy and indeed racist," he said.

"It is unfortunate that the authors of this statement had to resort to such personal attacks without admitting that the reason the department finds itself in this position in the first place is through its own failings."

EE  'shocked'
The nongovernmental organisation said on Tuesday evening it was shocked and disappointed by Motshekga's comments.

Equal Education chairperson Yoliswa Dwane called for Motshekga to distance herself from the statements, which it said was racist.

"Equal Education consists of people of every background and we are very proud of this. Any person who commits [themselves] to advancing the daily struggles of poor and working class youth is welcome in Equal Education," said Dwane.

"That these values exist is something that those responsible for education should celebrate, not attack."

Motshekga published a draft set of norms in January which Equal Education and other activists and lawyers described as “severely inadequate”. Motshekga said in Tuesday’s statement that a re-draft of the document would take at least six months to complete.

She said she has been communicating with Equal Education to update it on the department’s progress in this regard.

She wrote a letter to the organisation on May 9 in which she indicated that the compulsory consultation process with the National Economic Development and Labour Council had not been concluded. When she received its report, Motshekga said, she would consider all recommendations.

"It is important to emphasise that norms and standards cannot be published at the whim of Equal Education," said Motshekga.

"The South African government is a democracy that requires all involved and interested in education to have ample time to make input to the final regulations," she said.

But Equal Education said “every factual claim” by the department in its statement “about the process needed for the finalisation of Minimum Norms and Standards for School Infrastructure is wrong and misleading”.

Meanwhile, basic education spokesperson Panyaza Lesufi said the department would appear in court if it received a notice to do so after a grade 11 Eastern Cape pupil took it to court over the condition of her school.

"We believe this case is part of the gimmick of the Equal Education to embarrass the department," he said.

Equal Education is one of the applicants in the case, which was postponed to October 22.