Beckham, who was visiting Shanghai in his role as ambassador to the troubled Chinese Super League (CSL), expressed hope that the injured would recover quickly after the event had to be called off.

The stampede occurred when hundreds of students and spectators tried to rush onto the grounds of the football pitch at Tongji University in northeastern Shanghai, the Xinmin Evening News said.

"Nearly 1 000 spectators charged to open the gate at the same time, causing a stampede," the newspaper said on its microblog.

Police said seven people were injured including three police officers and two university security guards, all of whom suffered cuts and bruises.

"I was standing in the second row to take a picture of Beckham and then people started to push against each other," a woman said in a video posted by Xinmin Evening News.

"Someone in the front fell but people at the back were still pushing, so I fell over too. I couldn't breathe. I was really almost dying," she said.

An AFP photographer saw a woman with an injured leg and a uniformed policewoman bleeding.

The police officer had blood covering her face and looked dazed. 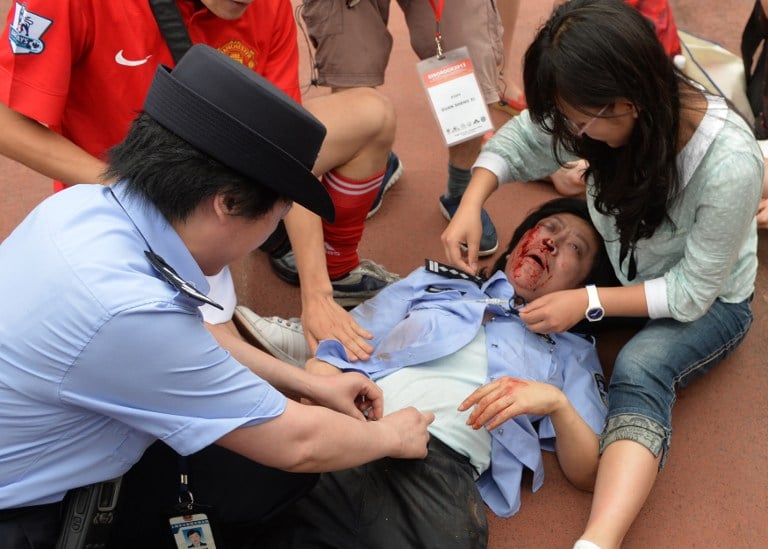 Among those attending to her was a man wearing a replica of Beckham's old Manchester United jersey, with the footballer's name and the number "7" on the back.

In a posting on his new account on Sina Weibo, China's equivalent to Twitter, Beckham apologised for the event's cancellation.

The former England captain was scheduled to play with the university's team and the youth team of a local football club.

"I had an incredible response from everyone at Shanghai Tongji University today. Sorry I couldn't get out on the pitch to see the teams. It was impossible to get through the massive crowds," he said.

"I heard there were a few injuries, hope the fans are ok and I wish them a speedy recovery," he added.

Beckham did not appear to be in danger at any point, though students earlier broke through a police line to surround his car as he approached the pitch, the AFP photographer said. 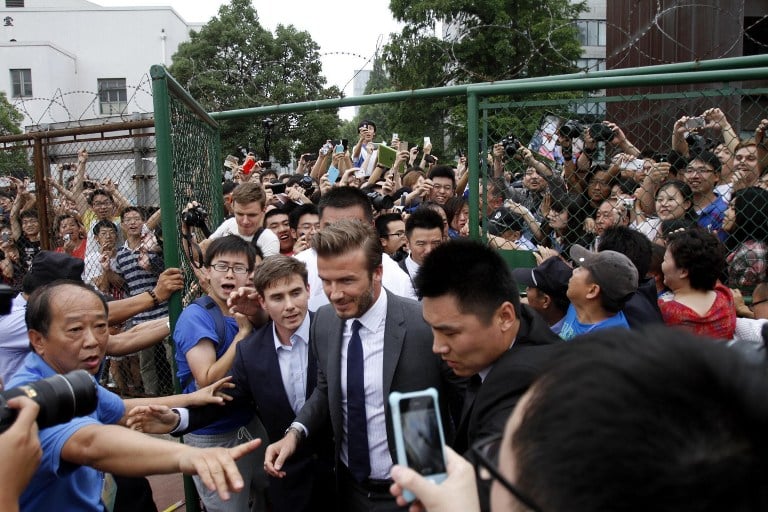 Beckham's appointment as ambassador to the CSL is being viewed as an ambitious attempt by authorities to improve the battered image of the Chinese game.

The 38-year-old began his new role in March, before announcing his retirement last month after winning the French league title with Paris Saint-Germain.

China launched a high-profile crackdown on corruption in football in 2009, and scores of officials, referees and players have been imprisoned.

Earlier this year, authorities banned 33 people – including league officials – from involvement with football for life and stripped Shanghai Shenhua of their 2003 league championship title.

"People questioned why I wanted to be involved in something that, like I said, in the past had a bad name or there was corruption involved," Beckham told an earlier news conference prior to the stampede.

"For me, the past is the past. I'm only interested in the future and it's going to be a very bright one," he said.

But as Chinese football strives to eradicate its corruption issues, the national team continues to be a target of ridicule for the country's long-suffering fans. 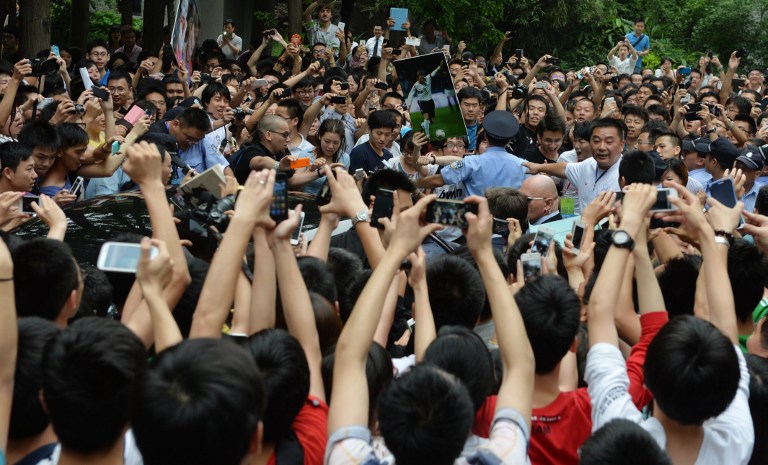 The latest humiliation – a 5-1 loss to Thailand in a friendly held in China on Saturday – saw angry scenes after the game and thousands take to the Internet to vent their anger.

Beckham referred to the match in response to an emailed question from a fan on Sina Weibo Wednesday.

"I know the result wasn't good recently, but sometimes you have to go through the difficult times to improve," he said.

Beckham's trip is the second of three that he is making during the Chinese season, which runs from March to November.

He is expected to attend a CSL game in the eastern city of Hangzhou on Saturday before joining his wife Victoria at a charity auction in Beijing on Sunday. – AFP