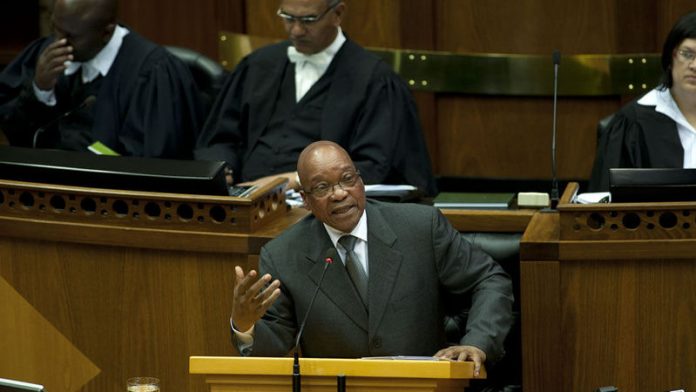 President Jacob Zuma was back in Parliament on Wednesday to answer questions from MPs about a wide range of issues that have recently affected the country.

But if the president's responses are anything to go by, he does not know much about what happens in South Africa.

Besides inadvertently admitting to being friends with the controversial Gupta family and confirming that Libyan officials had contacted South Africa about Muammar Gaddafi's billions believed to be stashed here, the president was not that forthcoming on the controversial issues.

He defended the Gupta's relationship with members of his executive.

"It is because any member of the public within South Africa and beyond our borders is free to contact members of my Cabinet, the executive or the public service directly.

"This is in line with the ethos of our administration which promotes an open and accessible government," Zuma said while responding to Democratic Alliance parliamentary leader Lindiwe Mazibuko, who wanted to know why the Gupta family had direct contact with members of his Cabinet and how Zuma was going to work towards ending the culture and practice of name-dropping.

"I take it the incident has been investigated and the report is in Parliament and whatever issues that people would be concerned with would be addressed by the report," he said.

But when the Independent Democrats's Joe McGluwa wanted to know whether he spoke to the Guptas about the incident and whether he was willing to cut ties with them, Zuma responded: "The honourable member who asked the [original] question made a very clear statement that every human being has a right to be friends with whoever. We are not in a state that bans people because they are friends with others."

"We are also in a state where if there are specific issues that have affected either the interests of government, there are facts that [would] say this thing has happened and this thing is not good … You can't just say because there are these rumours around, can you therefore change what you are doing or whatever, we don't operate around rumours …, " he said.

'Facts and evidence'
Asked by the Congress of the People's Papi Kganare whether he would call for an investigation on how a Free State farm was leased to the Guptas, who were not previously disadvantaged in this country, Zuma encouraged Kganare to forward "facts and evidence" to the authorities.

But he also added: "You know my name is dropped everywhere. Whoever does something, even if there was a car accident: Zuma, you know. The Zuma name emerges, whether he is aware of it or not aware of it!"

Meanwhile, Zuma told Parliament that he knew nothing of Libya's slain leader Muammar Gaddafi's billions which are allegedly stashed in this country.

He confirmed that Libyan officials approached the presidency regarding reported sums of money allegedly deposited on behalf of Gaddafi and held by banking institutions in South Africa.

They were referred to the ministry of finance. On June 4, Finance Minister Pravin Gordhan met Usama al-Abid, the minister in the office of the Libyan prime minister, he said.

"The two delegations agreed that the repatriation of Libyan funds and assets from South Africa will be handled in terms of United Nations resolutions and protocols," Zuma added.

He said the decision was informed by the fact that the government of Libya established a single body in 2012 to co-ordinate the repatriation of assets to Libya in line with United Nations protocols.

'I also don't know'
Asked whether the assets were Gaddafi's or the state of Libya's and how was the ANC's head of security, Tito Maleka, involved in what should be a state-to-state affair, Zuma denied any knowledge of anything.

"With regard to the last part, I don't know, that has not come to my ears, that an ANC head of security was involved, I don't know about it.

"With regard to whether the money belonged to Gaddafi or the state, I also don't know. I don't know how this money came here or who is its owner. The only thing I've answered is that Libyan officials have come asking for what they knew was here and apparently yes it is, and the arrangement that it must be taken back."

The Inkatha Freedom Party's Mkhuleko Hlengwa wanted to know whether Zuma would launch an investigation on how Bashir Saleh, a man who is known to be a Gaddafi banker, and who was seen at the ANC's centenary gala dinner and at the Brics summit in Durban, ended up in this country. Saleb is on Interpol's wanted list.

"I'm not certain that South Africa has resources that each time there's an allegation that somebody is a criminal and is wanted that South Africa must take it upon itself to investigate, I don't think we can work like that.

"Whether this man was a Gaddafi man or involved in the money I don't know. [But] what would be funny is if South Africa, whenever there's a mention that a person is wanted by police internationally, we must then stop things and investigate the people. I don't know what type of government we would be. I don't think government works that way," he added.