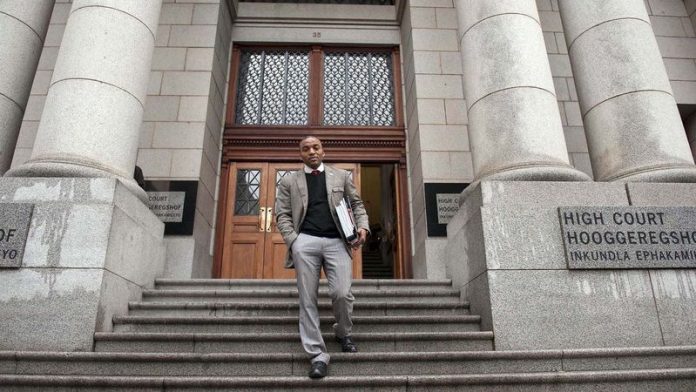 Police Minister Nathi Mthethwa has not yet committed to apologising to a Cape Town student who was arrested and allegedly bound and hooded by President Jacob Zuma's bodyguards three years ago.

Chumani Maxwele said he felt that justice had been served last week, after the South Gauteng High Court dismissed Mthethwa's application for a review of the South African Human Rights Commission's finding against the minister and the ­president's Special Protection Unit.

"The judgment means a lot to me. In a sense, it exonerates me and my family name," said Maxwele this week.

"It also affirms what we have been saying for the past three years, that my constitutional rights have been grossly violated by the South African Police Service.

"I am very happy with the judgment because it seeks to close one chapter of this very painful process in seeking justice."

Yet, according to Kerry Plots, a senior associate at law firm Cliffe Dekker Hofmeyr, which has been working pro bono on the case, the judgment does not compel the minister to comply with the Human Rights Commission's findings.

Apology
Plots said the court dismissed the minister's attempt to review and set aside the Human Rights Commission's recommendation that he apologise to Maxwele on behalf of the police for the violation of his human rights.

It also recommended that he implement a plan to teach the police to act in accordance with the Constitution and the law.

This week the Human Rights Commission said that during its investigation into Maxwele's complaint, lodged by the FW de Klerk Foundation's Centre for Constitutional Rights, it had received "poor co-operation" from Mthethwa's office.

Maxwele's quest for justice in the face of police brutality, has drawn widespread support.

Since he was arrested by Zuma's bodyguards while out jogging on De Waal Drive in Cape Town in February 2010 his life has been thrown into turmoil.

The bodyguards accused him of pointing his middle finger at the blue-light motorcade, which he has always fiercely denied.

A political science student at the University of Cape Town, Maxwele alleged that after he was thrown into one of the vehicles, his head was covered with a black bag and his hands were tied behind his back.

Detention
During his overnight detention, he was allegedly interviewed by the National Intelligence Agency and denied food and a bed to sleep on in his cell. His home was searched by police during his detention.

Mthethwa's spokesperson, Zweli Mnisi, would not say whether  the minister would apologise to Maxwele, but said Mthethwa fully respected the judgment.

"The minister did not undermine the commission and raised valid constitutional issues, hence the reason why he also co-operated fully with the commission," said Mnisi.

"The matter does raise an important constitutional issue, that is, whether litigants should have access to a plethora of fora within which to ventilate their complaints against the state or whether they should determine a particular forum within which to do so.

Civil case
"The judgment, unfortunately, does not clarify this important constitutional issue."

Maxwele's civil claim for R1.4-million against Mthethwa for wrongful arrest is still in limbo after it failed to start in the Western Cape High Court two weeks ago.

This week, he approached his lawyer, Neil O'Brien, to see whether  the minister's ­previous offer of an R80­000 settlement could be resurrected to bring him closure.

O'Brien told him that he had withdrawn from the case after Maxwele had turned down Mthethwa's offer, he said.

On Wednesday, O'Brien said he had not "officially" withdrawn, but would not comment on whether he would be representing Maxwele in the civil case.

To add to the mystery around the case, Mnisi said the minister was not aware of Maxwele's intentions to try to reach settlement.

UIF delays are making me Ters

We can gamble and eat out and one day gwais will be legal, but staying pozi is best — the virus is gaining on us, writes Paddy Harper
Read more
Friday

Artists are trying new ways of working, with few of them able to access state relief funds
Read more
Coronavirus

Watch it again: Mthethwa briefing on Covid-19 relief fund for sport and arts and culture

Comrades winner Bong’musa Mthembu cannot compete because of Covid-19 but is fortunate that he can survive financially. Others are not as lucky as their sources of income have dried up
Read more
Advertising