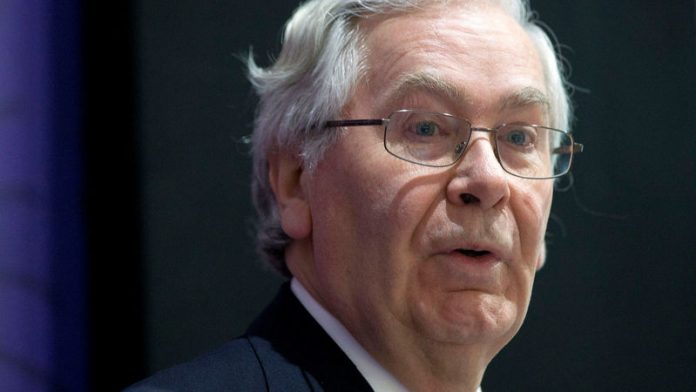 British Finance Minister George Osborne will doubtless lay the compliments on thick when he says a public goodbye to Bank of England governor Sir Mervyn King in his annual Mansion House speech this week.

Unrivalled record of public service, towering intellect, seen Britain through some pretty hairy moments, nation should be eternally grateful, that sort of thing.

In truth, the chancellor is keen for King to go and the Mark Carney era to begin.

He has a new court favourite, handpicked from the ranks of the international central banking community, who has been brought in with the task of providing the escape velocity for the economy King promised, but did not deliver.

In recent months, King has become something of a Cardinal Wolsey figure: the elder statesman upon whom the young prince relied but who has fallen out of favour after years of devotion to the state.

One of the new governor's first tasks will be to decide, after discussions with his colleagues on the monetary policy committee, whether the bank wishes to give forward guidance about the likely path of interest rates.

Last week's resignation of deputy governor Paul Tucker, and the scheduled retirement next year of the other deputy governor, Charlie Bean, gives Carney scope to appoint his own people to the top jobs at the bank.

While Osborne has the final say on the choice of the two deputy governors, he is certain to rubberstamp whomever Carney chooses.

Before considering the challenges facing the new governor, it is worth assessing the record of the man he is replacing.

King's three biggest achievements were the creation of the United Kingdom model of central bank independence from the policy vacuum that existed after Black Wednesday in 1992; his bracingly refreshing approach to the special pleading of the financial sector; and his willingness to set all the monetary policy dials to "go" when the economy hit the skids in 2008-2009.

Big failings
His three big failings were the "ivory tower" approach to policymaking in the pre-crash years, when the governor's preoccupation with monetary policy blinded him to the growing fragility of the financial system; the delay in spotting, during the year that separated the run on Northern Rock from the collapse of Lehman Brothers, that interest rates were too high; and being overzealous in backing Osborne's fiscal policy.

Funnily enough, it was the cover King provided for austerity that has led to the cooling of relations with Osborne.

When advising the new chancellor, the governor insisted that the public spending cuts and tax increases planned by the treasury would not derail growth because the bank could stimulate the economy using monetary policy.

There are reasons why the strategy has not worked, some of them — like the crisis in the eurozone — beyond King's control.

But like Henry VIII, Osborne is no longer interested in excuses. The next election is less than two years away and he wants action.

Carney may be lucky enough to arrive just as four years of stimulus are starting to have an effect.

Positive signs
The forward-looking reports on manufacturing, services and construction improved in June. There are signs of life in the housing market. Unemployment is edging down.

The financial sector is pencilling in growth of 0.5%-0.6% in the second quarter, double that in the first three months of the year.

All the new governor may have to do is reassure the markets that stimulus is not going to be withdrawn any time soon, say some suitably upbeat things about the UK being over the worst, and bingo! Job done.

It may, of course, not be quite as simple as that. There are those both in the government and in the financial sector who question whether the recovery is genuine.

Real incomes remain under pressure and the global economy has turned down since the start of the year. Add in the impact of austerity, and it's easy to envisage a slowing of activity in the second half of 2013.

King, for months past, has been voting for the monetary policy committee (MPC) to do more to stimulate activity, voting in a minority of three to increase the bank's quantitative easing programme by £25-billion.

Carney, it must be assumed, shares King's views, otherwise there is little point in him being appointed.

Vote on policy change
So how does he play his first meeting of the MPC, which will be held in his first week at Threadneedle Street?

The recent run of modestly good data means there is no obvious reason why the six MPC members who have been steadfastly voting for no change in policy are going to change their minds.

Indeed, there would be questions asked about their independence if they did switch their votes simply in order to make life easier for the new governor.

But if Carney ends up on the losing side it will immediately raise doubts about how effective he is going to be.

Carney could, of course, decide to vote with the majority if he senses that he cannot win over the MPC. That, though, would be just as big a public relations disaster, since it would give the impression that the new governor had bottled it.

Surprise
None of this will come as a surprise to Carney, who is smart enough to know that this is potentially a serious problem. What may surprise him is the way in which his setbacks will be reported.

"Carney screws up" is a better headline than "Carney's steady hand on the tiller."

This all makes the new governor's choice of personnel even more interesting. Does he bring two new deputy governors in from outside or does he pick the internal candidates: Spencer Dale, the chief economist, for Bean's job; and Andy Haldane, Threadneedle Street's director for financial stability, for Tucker's?

Carney has already crossed swords with Haldane about new rules for bank regulation and he may find Dale's approach to the economy overcautious, but even so, it would be risky to thwart the ambitions of both men.

Why? Because the Bank's dual mandate means Carney will need good people to help him. Because the new governor is going to have his work cut out with an economy riddled with deep structural problems.

And because bringing in your own people smacks of rule by faction, which, as Cromwell found, is dangerous when things go wrong. — © Guardian News & Media 2013