SA’s economy is running on empty 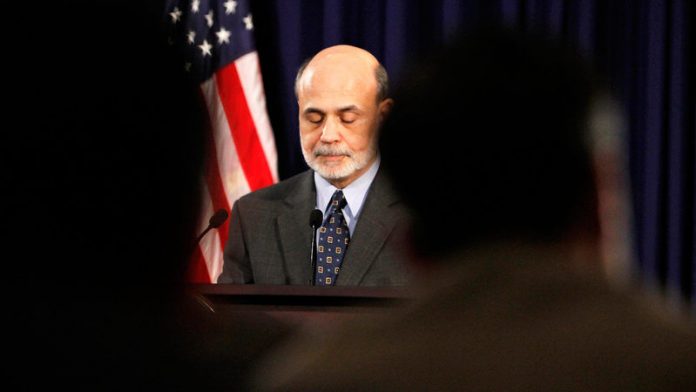 The South African economy has been running on a sugar-fuelled high thanks to the stimulating effect of United States Federal Reserve Bank governor Ben Bernanke's quantitative easing programme.

But with indications growing that the Fed could begin tapering off the programme, the Zuma administration can no longer rely on this sugar rush to mask the ailing fundamentals of the local economy, according to economists.

On Wednesday, Bernanke said in a press briefing that if incoming US data was broadly consistent with its relatively optimistic economic forecast the central bank would begin to moderate the purchases of assets, namely government bond and mortgage-backed securities, later this year.

"If the subsequent data remained broadly aligned with our current expectations of the economy we will continue to reduce the pace of purchases, in measured steps, through the first half of next year, ending purchases around mid-year," Bernanke said. He stressed however that this was contingent on what happened in the US economy.

But, he argued, it has served to mask the underlying problems in South Africa's economy, including its lacklustre growth, the stubbornly wide current account deficit and the government's financial position.

Defining quantitative easing
Quantitative easing is the purchasing of assets such as government and other securities by a central bank, injecting money into financial institutions in a bid to increase liquidity.

The latest round of quantitative easing was launched in November last year, with the announcement of the purchase of mortgage-backed securities and government bonds to the tune of $85-billion each month. The massive stimulus in recent years, has seen an additional $2-trillion flood into the US economy.

Coupled with efforts to keep interest rates at all-time lows, it was intended to help economic growth recover, following the 2008 recession.

But, as Lings explained, there have been a number of unintended consequences to the Fed's efforts.

Some of this liquidity has found its way into the financial markets, contributing to an improvement in the US equities market.

This was further boosted by South Africa's inclusion in the Citigroup's world government bond index.

"In the background, South Africa's fundamentals were left to deteriorate," said Lings.

This has been seen predominantly in the country's widening trade deficit and, consequently, its current account deficit. The deficit, funded by foreign inflows, has also meant the rand is vulnerable to investor sentiment.

On Wednesday, the South African Reserve Bank released its quarterly bulletin, which revealed a narrowing in the current account deficit to 5.8% of gross domestic product (GDP) from 6.5% in the first quarter.

"Although the narrower current account deficit is encouraging, the shortfall still remains large and the rand is still vulnerable," Nedbank economists Busisiwe Radebe and Dennis Dykes said in their analysis.

"The balance of payments will remain under pressure in 2013. Trade performance will remain lacklustre as long as the global environment remains unfavourable. More domestic production disruptions, mainly labour strikes, would add to the weak external trade account."

Lings said that had contributed to economic growth without an increase in employment, which had in turn helped to fuel social tension. As a result, South Africa had seen ongoing labour unrest in the mining sector, characterised by violence.

"The large foreign inflows have masked the problems and this deterioration," Lings said, and those were issues that credit-ratings agencies had warned of before the spate of downgrades seen last year.

However, the state had begun to appreciate the problems, with Finance Minister Pravin Gordhan shifting fiscal policy to increase government spending on investment in infrastructure.

The benefits that should have been created by the flow of money into South Africa, such as a cheap source of financing for the major infrastructure roll-out, had not been fully realised, he said.

In May, Bernanke indicated that the Federal Reserve could start slowing quantitative easing if economic data suggested it was warranted.

That had provided a signal to the market to begin pricing in the end of the stimulus but the process was likely to be very gradual, Lings said. Fundamentals would begin to matter again and investors "will not just be focusing on yield, but on risk as well".

SA seeing shift already
South Africa has already begun to see this shift, evidenced in the recent fall in the rand against the dollar, which has declined roughly 14% against the greenback since the start of the year, according to data from Stanlib.

The yields on South African bonds have also seen a steady uptick in recent months to between 7% and 8%, off lows of about 5.8%.

South Africa's low economic growth rate — GDP grew at only 0.9% in the first quarter of 2013 — meant it would be under increased pressure to deal with fundamental domestic issues to ensure it continued attracting sufficient capital inflows.

Lings said the process would be slow, however, and foreigners were not yet selling off South African assets. Instead, international investors were adopting a wait-and-see approach, preferring not to buy local bonds in the same quantity or pace.

Advanced economies "will remain accommodative"
The Reserve Bank said in its June bulletin this week that "the mixed picture" for the global economic outlook suggested that monetary policy in the advanced economies "will remain accommodative for some time despite recent fears in the financial markets of an early reversal of quantitative easing in the US.

"The relatively weak growth outlook in the advanced economies has contributed to the subdued global inflation environment," it said.

Developed nations, including Japan, have also embarked on aggressive quantitative easing, with the Bank of Japan announcing it would buy $70-billion in bonds each month.

"Foreign investors' appetite for domestic securities continued to be affected by ongoing concerns about the sustainability of South Africa's current account deficit, the less vibrant outlook for domestic economic growth and the downgrading of the country's sovereign credit rating … by Fitch Ratings," it said.

Nomura strategist Peter Attard Montalto said in a recent research note that the government's reaction to the risks posed by the curtailment of quantitative easing could be slow.

Volatility of the mining sector
"The government reaction to a risk repricing (and certainly a sudden stop-tail risk) will probably be lagging, while the [Reserve Bank] is unlikely to intervene except if there is a more dramatic deterioration in the situation," he said in the note.

The ongoing volatility of the local mining sector had major implications for investor sentiment.

The unions, policymakers and those in the sector were deeply concerned about the outlook for mining, he said, but there appeared to be little real planning from the mineral resources department or elsewhere in government.

It was unclear what the draft pact that came out of high-level talks between the industry, labour and the government, led by Deputy President Kgalema Motlanthe, would do to help stability, Attard Montalto said in a subsequent comment.

The state was too concerned about maintaining stability until after the elections next year and it was only after that that the sector would see the necessary restructuring.

He said Zuma's recent speeches placed the blame on currency volatility abroad and did not recognise "domestic idiosyncrasies that are to the fore in investors' minds".

Lings said there was growing concern that, following the keen support the ANC had given to the National Development Plan at Mangaung, things had now "gone quiet".

The country needed hard specifics to begin addressing its problems, without which there was "no sense of urgency", he said.