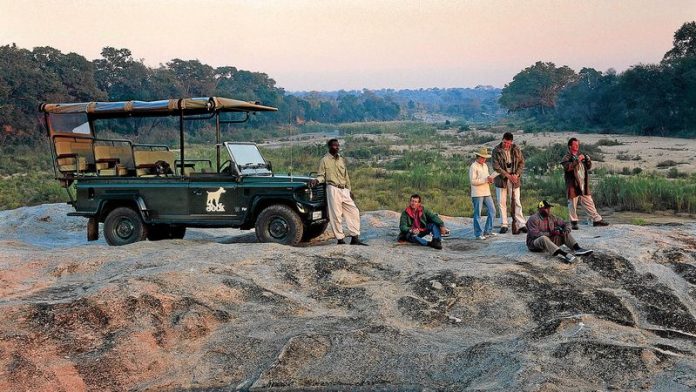 ‘You know most South Africans haven’t actually read the book,” Clyde Niven admitted to me over drinks at Vovo Telo in Parkhurst early one evening in May. It’s something, he told me, that they have on their shelves, and that they pull out every now and again, as a sort of reference.

An interesting sort of irony. Jock of the Bushveld, which was written by Clyde’s great-grandfather, Sir Percy ­FitzPatrick, is a South African classic that was first published in 1907 at the urging of FitzPatrick’s friend Rudyard Kipling, and it hasn’t been read widely for years.

I met Clyde, who owns a lodge in the Addo Elephant National Park in the Eastern Cape, and his sister, Sally Ann, who works for a publishing company and lives in Parkhurst, after I returned from a trip to Jock Safari Lodge in the southern part of the Kruger National Park.

I was trying to figure out how it was that FitzPatrick’s descendants had come to build the first private concession in the park. The siblings are the children of Patricia and Desmond Niven, who was one of three children born to Cecily FitzPatrick — her father Percy’s only surviving child — who married Jack Niven in 1923.

The family, Clyde explained, first built the lodge in 1983, after the National Parks Board asked them to take part in a new venture, a creative sort of funding strategy that would allow the park to build upmarket lodging without impinging on their own severely constrained budget.

The ask: build a lodge in the middle of the Kruger National Park and let us hire it out and we’ll give the family exclusive rights to it for 40 nights a year.

The family chose a spot situated on the confluence of two rivers — the Biyamiti and the Mitomeni — near Old Jock Road, which once formed part of the transport route between Delagoa Bay (Maputo) and Lydenburg, the route FitzPatrick travelled as a transport rider and prospector’s hand, the adventures of which he wrote about in Jock.

After 1994, Clyde explained, the parks board felt uncomfortable with the notion of those “exclusive” camps, demarcated the concessions and leased them out on open tender. These days the owners of Jock Safari Lodge — with its 12 chalets in the main lodge area and a smaller encampment called ­FitzPatrick’s, with three suites — are the Shamwari Group and the former owners of the V&A Waterfront, the Dubai World Group.

The FitzPatrick Family Trust (which also oversees the Percy FitzPatrick Institute of African Ornithology at the University of Cape Town, and has entrusted historical documents to the National English Literary Museum in Grahamstown) maintains a marginal ownership —as well as their designated nights throughout the year.

The rooms, which stand alongside the mostly dry riverbeds, come with their own treehouse viewing area with a big day bed that you can plunk the whole family onto, a private plunge pool and an outdoor shower.

The rooms themselves aren’t large, but they do the job, a good-sized bath, a king-size bed, a full bar (not inclusive, and, sadly, not always restocked, even with the basics, when we were there) and a copy of Jock of the Bushveld — the modern, edited version, racist rhetoric removed. There’s a spa and a small gym situated near a statue of Jock himself.

The dining room is grand in the evening, beautifully lit with candles and zipped down to keep the cool night at bay. But food was uneven when we were there — one night a great lamb curry, the other a braai with 1980s hotel-school-style creamed spinach. The meals and two game drives were included in the price, which makes it slightly easier to swallow the generous price tag.

The drives — early morning and early evening — were expertly ­handled by experienced guides who really knew their bush and, with their radios, were able to deliver the best of it. But it is their latest offering, a first of its kind adventure in the Kruger National Park, that takes the more adventurous on a two-day walking safari, where upmarket camps are set up in different locations in the park, with tents, canvas washbasins and lanterns. At R2 000 per person per night, camping with experienced guides in the middle of the park, is really a once-in-a-lifetime experience.

It’s something that would have made FitzPatrick and his daughter, Cecily, proud. Clyde tells the story of his adventurous grandmother who went on a hunt for Jock’s grave in 1948. She and Eric Chapman (and a man referred to as Mr Costa) found it, with the help of some long-time residents, including the famed game ranger Harry Wolhuter, who pointed them in the right direction — a fig tree, just as FitzPatrick had written in Jock.

When they reached the spot, Cecily changed her mind. Family legend has it that their grandmother said she decided “it would have been a pity to disturb the dear old dog’s bones — let him lie”.

Her grandchildren say they are planning an adventure of their own — one that will take them to where she left off. Sally Ann and Clyde say they want to follow FitzPatrick’s trail, which was once demarcated by a series of brass plaques in the Kruger National Park, which have, over the years, been stolen. Clyde and Mike Wolhuter, Harry’s great-grandson, plan to replace the plaques.

It’s a worthy exercise for a fascinating historical character — the son of an Irish-born judge of the Supreme Court of the Cape Colony, FitzPatrick worked as a prospector’s hand, became the editor of the Gold Field News in Barberton, was tried and imprisoned for high treason for his involvement in the Jameson Raid, wrote four books (Jock, The Transvaal from Within, The Outspan and South African Memories, which was published posthumously) and went on to become an MP of the Union of South Africa.

Like his great-grandfather, Clyde is a bit of an adventurer — he once travelled by ox wagon with Andrew Hall — the grandson of Hugh Hall, another central character in Jock — along the same trail through the Selati area that FitzPatrick took.

Both he and Sally Ann thought the Shamwari Group’s latest venture of taking people out into the bush was a splendid idea.

The writer was hosted by Jock's Safari Lodge.

● Great for: A long bush weekend for a family, or a romantic getaway.

● Accessibility: Located in the southern part of the Kruger National Park, it is a five-hour drive from Johannesburg.