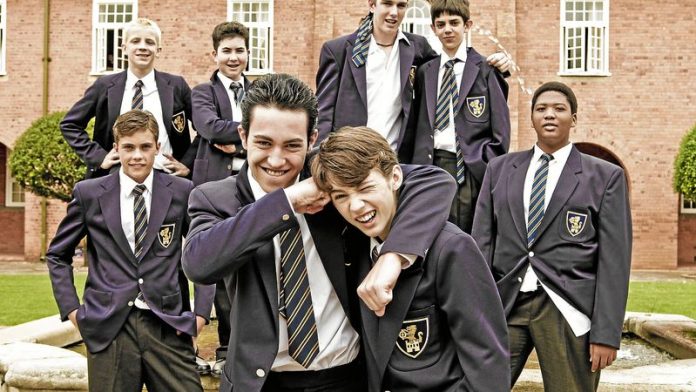 The titular Spud, whose real name is John Milton (Troye Sivan), returns to his all-boys school for another year of high school ­shenanigans with his dorm mates, a gang affectionately known as the Crazy Eight.

But their housemaster (Jason Cope) is turning the school into an oppressive dictatorship, so Spud and the gang, accompanied by the venerable “Guv” (John Cleese), hatch a plan to take back the school — and, with luck, avoid expulsion.

On top of all this, Spud is coming to terms with girl problems.

Spud II delivers on the entertainment it promises, with a teen-focused script that makes good on the style of comic gags that we’ve come to expect from the genre, with a local twist.

However, returning director Donovan Marsh fails to bring new audiences up to speed with the cast of likeable characters, which makes some of the characters seem underdeveloped to new eyes.

The musical score by Ed Jordan is uninspired when placed against the licensed tracks that bring out the early-1990s period with such charm; it falls somewhere between the uncharismatic chimes of a TV commercial and those of a B-grade soap opera, cheapening the mood of the production in general.

Spud II: The Madness Continues is an adequate but indisputably forgettable entry, a low-investment retreat into the mind of a confused young man and the times of a country on the brink of change.

In spite of some weak production values and underwritten characters, though, the young cast perseveres. The humour is more suited to the tastes of today’s young audience than to those in search of a ­history ­lesson, but Spud II is an easy ­distraction from a string of pitiful local releases that have failed to ignite an interest in the floundering South African film industry.

The title of Michael Haneke’s "Amour" is a challenge: not ironic, not celebratory, and yet somehow not complicated either.
Read more
Advertising
Continue to the category
Education