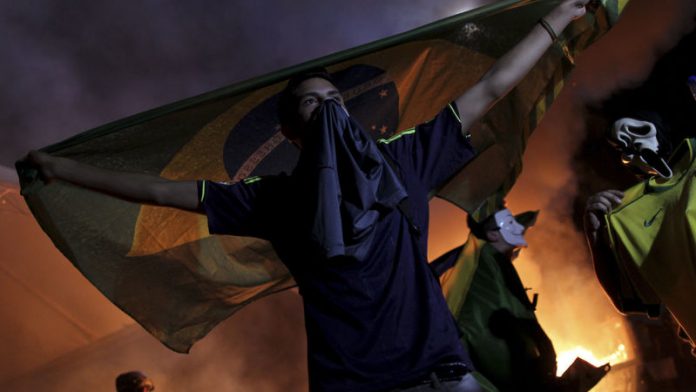 Rousseff's televised address late on Friday appeared to have failed to sway protesters, as activists vowed to continue the struggle and ordinarily football-mad Brazilians once again protested outside Confederations Cup games.

More than 70 000 people chanting "The Cup for whom?" rallied in the south-eastern city of Belo Horizonte as Mexico edged Japan 2-1 in the football tournament seen as a dress rehearsal for next year's World Cup.

Police fired tear gas when some of the protesters hurled stones and tried to break through the security perimeter around the Mineirao stadium. Fifteen people were reported injured in the clashes.

"We are against the World Cup because it masks the problems the country faces," said musician Leonardo Melo, who dismissed Rousseff's speech as "rhetoric".

Over the past two weeks, hundreds of thousands of Brazilians have protested against the billions of dollars being spent on the World Cup, accusing the government of wasting money and neglecting health, education and transport.

More than one million marched in scores of cities on Thursday.

In São Paulo, 35 000 people took to the streets peacefully on Saturday to denounce a proposed constitutional amendment that would take away the power of independent public prosecutors to probe crimes, making it harder to combat corruption.

In the southern town of Uruguaiana, demonstrators peacefully occupied the bridge linking Brazil to Uruguay for four hours.

In the university town of Santa Maria, where a disco fire killed 242 young people in January, 30 000 people protested.

In Salvador, where Brazil beat Italy 4-2 in another Confederations Cup match, demonstrators totalled about 200 people, according to an Agence France-Presse reporter.

Inside the stadium, dozens of fans brandished placards proclaiming: "Let's go to the streets to change Brazil."

Smaller demonstrations took place elsewhere around the country, including in Rio where 40 youths camped outside the residence of State Governor Sergio Cabral in the posh Leblon district.

In her address, Rousseff offered Brazilians a "great pact" between the government and the people to improve shoddy public services and stressed the need for "more effective ways to fight corruption".

But her intervention left the protesters unmoved, judging by a torrent of comments on social media websites amid the release of a new poll showing that three quarters of Brazilians back the demonstrations.

"I was depressed listening to Dilma. It's a joke, right? Dilma treats us as if we are idiots," read one typical comment.

"We want dates and times, action. Promises are not enough," wrote another.

The protests have been largely peaceful but some have been marred by violence and acts of vandalism, notably in Rio and Brasilia, with two deaths recorded to date.

The popular outrage, dubbed by some a "Tropical Spring", echoing similar protest movements in the Arab world, the United States and more recently in Turkey, has come as a shock to outside observers.

The unrest even led Hollywood A-lister Brad Pitt to scrap a plan to come to Brazil to promote his new film World War Z, the movie's distributors said on Saturday.

Rousseff's predecessor and political mentor Luiz Inácio Lula da Silva left office in 2010 with an 80% approval rating, and the social policies he initiated are credited with lifting 40-million Brazilians out of poverty.

Lula also helped raise Brazil's international profile, and the World Cup was seen as a key milestone in its emergence as a global power player after several years of steady economic growth.

But despite the nationwide obsession with football, the protesters say they feel left behind as they watch gleaming new stadiums spring up in cities paralysed by traffic jams and clogged with aging trains and buses.

"People have a right to criticise," Rousseff said, promising to meet with the leaders of peaceful demonstrations as well as workers and community leaders.

But the president warned against further violence, saying "the government cannot stand by as people attack public property … and bring chaos to our streets". – AFP